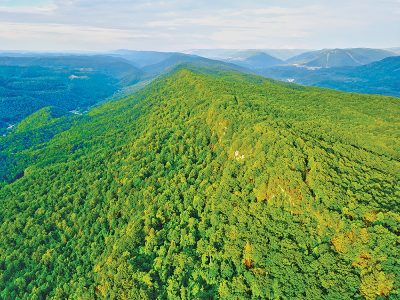 In addition to the Narrows Preserve established in March, the areas recently protected are known as the Line Fork Preserve, the Hurricane Gap Preserve and the Kingdom Come Preserve. These tracts of land will also contribute to the Great Eastern Trail, a recreational hiking trail being built from New York to Alabama.

The 125-mile long ridge known as Pine Mountain “is one of the largest tracts of intact contiguous forest remaining in Kentucky,” according to the land trust. Project planners are working to conserve and protect the land that reaches from Jellico, Tenn., to Elkhorn City, Ky. It will eventually be open to the public to access the Great Eastern Trail.

This will connect thousands of acres in the region, conserving habitats for plant and animal species such as the green salamander, migratory warbler, yellow-fringed orchid, black bear and Indiana and northern long-eared bats.