The red crossbill is an elusive finch that can be found feasting in the conifer trees of the Appalachian Mountains during any time of the year—but finding exactly where can be a challenge for even the most experienced birders. 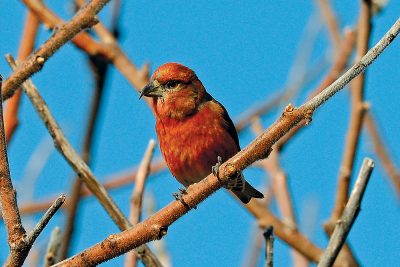 A red crossbill alights on a tree at Briery Branch Gap near the Virginia-West Virginia state line. Photo by Dick Rowe

Red crossbills are named for the unique crossing of their upper and lower beaks that allows them to extract seeds from conifer tree cones. By biting down, the crossing bills actually pushes apart the cone and allows them to grab the seeds with their tongues. There are nine different types of red crossbills, each of them distinguished by how their beaks have adapted to the cones of different trees.

While some types only prefer the seeds of one or two trees, the Type-1 red crossbill, or Appalachian crossbill, is not as picky. Its beak is smaller and better suited for softer cones, like those from hemlocks and many spruce, fir and pine trees.

“If there’s not a good cone crop across a landscape scale, they might go a considerable distance to find food,” says Curtis Smalling, director of conservation for Audubon North Carolina. “So people that never have them might all of the sudden one winter might have a ton of them.”

This traveling lifestyle means that unlike most birds, crossbills have no set breeding season.

“They breed based on availability of food,” says Casey Rucker, author of the red crossbill species account for the West Virginia Breeding Bird Atlas II, which is scheduled for release in 2018. Crossbills may build a nest and breed whenever they find a good cone crop, except during winter.

Without a permanent home, these birds can be very difficult to find or study. Within 15 to 25 days after hatching, a young crossbill can already fly long distances, although their crossed bills may not be fully grown until much later. According to Rucker, red crossbills have been observed in West Virginia for over a century, yet there are no confirmed breeding records of the birds in the state. Their nests are hidden high up near the trunks of dense conifer trees, and their plumage can easily blend into the forest.

“Females tend to be yellowish-green. Adult males tend to be red. The younger birds can be largely brown, especially in the nest,” says Smalling. “It’s not uncommon to see mixed flocks that have all plumages.”

Crossbills are most easily recognized and found by their flight call. Although relatively quiet when settled into a tree, they make a distinct series of “chip” calls while flying.

“They’re usually noisiest when they all take off in the flock. That’s when they call the loudest,” says Marilyn Westphal, member of the Elisha Mitchell Audubon Society in Western North Carolina and a contributor to a report on Type-1 red crossbills for the American Birding Association.

➲ There are nine types of red crossbills, which rarely crossbreed
➲ Flocks consist of two to 40 or more birds
➲ Red crossbills stand around six inches tall and have a 10-inch wingspan
➲ They can live up to eight years in the wild

Even to a trained ear, distinguishing the difference in call sounds between the nine types of red crossbills can be very difficult.

In order to reliably identify crossbill types, their calls must be recorded and examined for slight differences.

During periods known as “irruptions,” when cone crops are low, crossbills can travel hundreds of miles from their native areas in search of new food sources — making it especially important to properly identify which type is being observed.

“Another issue obviously is climate change because many of these trees may not remain as temperatures warm and snow cover becomes less consistent over the winters,” says Rucker.

Although the red crossbill population as a whole is generally stable, certain types could be more vulnerable to loss of their particular habitat.

In 2016, the Cassia crossbill was declared a separate species from the red crossbill because it relies solely on the seeds of the lodgepole pine in the South Hills and Albion Mountains of Idaho.

“The Cassia crossbill is adapted to one particular tree, and that tree is being wiped out by climate change,” says Rucker. “So it may be that this species will be named and go extinct in the 21st century.”

The red crossbills of the Appalachian Mountains survived the major logging of the 19th century and more recent damages to hemlock and fir trees from the wooly adelgid parasite. Although their nomadic lifestyle makes them adaptive and robust birds, it is important that more of their food sources are not eliminated.

Currently, a group of private, state, federal and non-governmental organizations are cooperating on the Central Appalachian Spruce Restoration Initiative. Although not intended specifically for protecting the red crossbill, the project is aimed at restoring one of its key regional food sources and could help ensure these unique birds’ future in the Appalachian Mountains.