The KidWind Challenge gives middle school and high school students the chance to build their own wind turbine as part of a nationwide contest. James Madison University’s Center for Wind Energy hosts three regional competitions in Virginia. In May 2017, the winning team in Southwest Virginia, Off the Grid, went on to win the national competition in Anaheim, Calif. 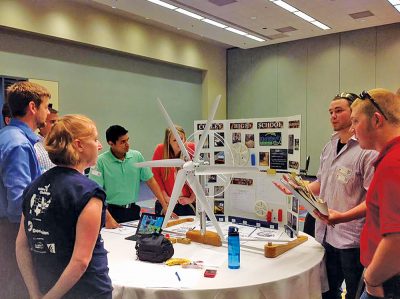 A high school team explains and justifies their turbine design, demonstrating their knowledge of the wind energy field, before a panel of expert judges at the 2014 National KidWind Challenge in Washington, D.C. Photo courtesy of the Center for Wind Energy at James Madison University

“The KidWind Challenge is great on many levels for these students,” says Remy Pangle, the center’s associate director and education and outreach coordinator. “The teams present to a panel of judges. They get to see and meet people who do this every day, and it helps them to realize that this is not just fun, but can be a real job.”

The three regional challenges in Virginia are sponsored by Dominion Energy. “We know that today’s students are the workforce and decision makers of tomorrow and they are already consumers,” says Cynthia Balderson, manager for corporate philanthropy and community partnerships at Dominion. “The KidWind Challenge provides relevant, hands-on learning opportunities for students to explore alternative energy.”

The event has grown since the first state competition was held in Richmond in 2012. Regional challenges are now also held in Roanoke and Chantilly.

“The first year, we had 12 teams,” Pangle says. “People had to drive quite a way. It’s grown to three regional challenges, with each one running anywhere from 20 to 25 teams.”

According to Pangle, team sizes have varied over the years, from as few as one to as many as 16 members. The teams work with teachers or coaches and other advisers to learn how to build a wind turbine. While the score depends partly on how well the turbine performs in tests, about half of it depends on how the teams perform in front of the judging panel. 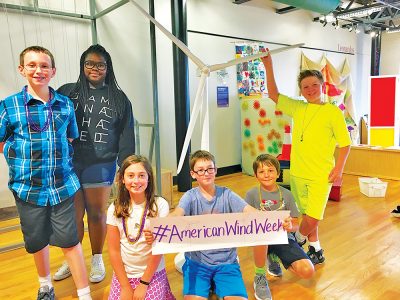 “If you get in front of the judges and can’t explain how everything works — because mom and dad did it or because you didn’t document well — you’re not going to win,” she says.

The 2018 challenge in Roanoke will be held at the Science Museum of Western Virginia for the first time. Hannah Weiss, education manager for the museum, found out about the challenge when she ended up sitting next to Pangle at the Virginia Children’s Engineering Convention. Weiss liked the project-based learning aspect of the challenge.

Too often, Weiss remarked, projects are like desserts — something you get to at the end of a class.

“With project-based learning, the project is the meal,” she says. “KidWind is an opportunity to do that. The way you learn about wind energy and how wind turbines work is by building one.”

Roger Beale, a retired Virginia engineer, has built a turbine in his backyard and serves as an advisor for KidWind Challenge teams. Read more about Beale’s DIY approach to wind energy.