West Virginia Gov. Jim Justice, who recently switched his affiliation from the Democratic to the Republican party, is pushing President Trump to subsidize coal-fired power plants to purchase Appalachian coal at a rate of $15 per ton. He argues that the United States has become too reliant on natural gas, which has been out-competing coal on a regular basis for the last few years. 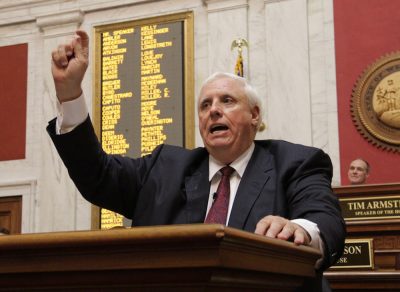 “Can you imagine what would happen if we lost the power in the East for a month, or two months, or three months?” Justice asked in a Bloomberg News interview. “It would be like a nuclear blast went off. You would lose hundreds of thousands of people. It would be just absolute chaos beyond belief.”


Many conservatives aren’t buying Justice’s plan. “Like corporate welfare queens everywhere, Justice pitches his plea for taxpayer bailouts in terms of jobs,” the conservative think tank Cato Institute said of the plan. “Yet Governor Justice’s proposal … would simply prolong the dying of an industry that has been declining for years, because West Virginia coal is increasingly expensive and difficult to mine, in the face of national and international competition.”

In 2014, NPR published an in-depth report on fines owed by Justice’s mining companies. At the time, the companies owed nearly $2 million in fines and had more than four times the number of overdue fines than the next most-delinquent mine operator. Justice himself is the state’s sole billionaire.

The fines were largely due to the thousands of safety violations that Justice’s companies accumulated over the period covered in the NPR investigation, including 1,300 classified as likely to cause injury or illness, and more than 500 that are common in mine disasters.

A follow-up investigation in 2016 showed that Justice owed $15 million in taxes and fines across six states, including $1.38 million in new and unpaid mine safety penalties.
Justice’s companies’ violations cover environmental and administrative issues. One of the companies, A&G Coal Corp., has outstanding violations at a minimum of 10 mines in Virginia. The violations involve a wide range of issues, including failure to pay fees and mine maintenance and planning. Justice-owned mines in Tennessee have accumulated 15 violations across eight mines in the past three years.

Lately, Justice’s companies seem to be going on the offensive to balance their books. Three companies associated with Justice are claiming to have paid excessive taxes in Wise County, Va. A&G Coal, Virginia Fuel Corp. and Nine Mile Mining filed a civil lawsuit alleging overbilling and incorrect tax assessment over the past three years and demanding more than $500,000 from the county, which has lost significant tax revenue in recent years due to the decline in active mining and in total population.

The companies allege that the overbilling arose from fees incorrectly assessed for mining machinery that has been idled, which occurs when the price for coal declines and companies choose to idle a mine until market conditions become more favorable.

Justice’s companies in Kentucky are taking an even more aggressive approach. Kentucky Fuel Corp. is suing two officials from the Kentucky Department of Natural Resources after the agency attempted to collect millions of dollars in unpaid fines.

“These lawsuits appear to be an attempt to intimidate public officials from performing their statutory duties to enforce coal mine reclamation laws,” John Mura, spokesperson for the Kentucky Energy and Environment Cabinet, said in a statement emailed to ThinkProgress. “The legal actions are entirely without merit and will be vigorously defended to protect our state government officials who devote their careers to safeguarding the land and the health of Kentucky citizens.”