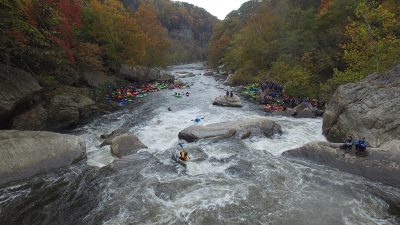 Kayakers gather at the finish line of the Lord of the Fork Race, an annual event for experienced boaters held during the last weekend in October. Photo by Gareth Tate.

Nestled along the border of Kentucky and Virginia, the John W. Flannagan Dam and Reservoir officially advertises boating, camping, fishing, hiking, picnicking, playgrounds, water sports and wildlife viewing. But during the month of October, a special event draws international crowds into the Breaks Interstate Park area and onto the Russell Fork River.

Within the Breaks Interstate Park, the Russell Fork Gorge, known as the “Grand Canyon of the South,” is a five-mile gorge with plunging depths of 1,650 feet. Each Saturday and Sunday during the first four full weekends in October, the Army Corps of Engineers manages a series of scheduled water releases from the Flannagan Dam, located on the Pound River, which is a tributary to the Russell Fork River. These releases create ideal whitewater conditions for kayakers and rafting enthusiasts of differing skill and experience levels.

Regular season waters stay between 50 to 100 cubic feet per second when the weather is dry. With rain, the river rises to 200 cfs or more and becomes accessible by personal kayak and canoe. But during the fall releases, water levels are maintained at 800 to 1,000 cubic feet per second and therefore allow commercial whitewater outfitters to take tours down certain parts of the river. These levels also attract more experienced kayakers. 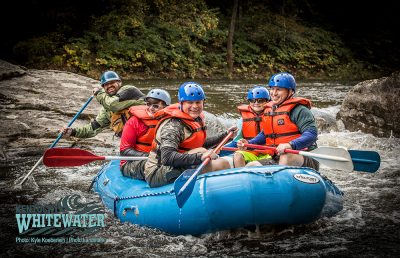 Rafters explore the river during a guided rafting trip with Kentucky Whitewater, one of several outfitters that operate on the river during dam releases. Photo by Kyle Koeberlein | Photo Landmark

Because of the ecotourism potential and interest from local kayakers and whitewater rafters, the communities surrounding the dam and outside whitewater enthusiasts have pushed for extra scheduled releases. These releases would happen intermittently throughout the year, as the Army Corps of Engineers saw fit. The Army Corps already releases water from the dam throughout the year, largely dependent on rainfall, but these flows can be sporadic and difficult for boaters to utilize.

There are three sections that the boating community uses to identify the Russell Fork River: the upper section, the gorge and the lower section. While commercial whitewater trips navigate the upper and lower sections, the gorge section is for private boaters only.

Elkhorn City resident Amy Brashears says that even though she’s been kayaking for a few years, she still gets scared seeing the roaring water.

“It’s massive and beautiful at the same time,” Brashears says. She describes the river as everything from solid class I to the technical challenges of class V. “I’m just amazed by all the talent that flies in here,” she says.

These releases also lead to an increase in revenue and foot traffic for nearby Breaks Interstate Park and the towns of Breaks and Haysi, Va., and Elkhorn City, Ky.

“The releases in October have always drawn a tremendous crowd,” says Austin Bradley, superintendent of Breaks Interstate Park. “I mean really, a global crowd. I’ve run into people from Japan, the Netherlands, Venezuela, really all over.”

Brashears says, “these extra releases would be a godsend to the nearby communities,” and compared the possibilities to the Nantahala River in Bryson City, N.C., a national destination for family whitewater adventures.

According to Gene Counts, a kayaker himself, these efforts have been going on since the ‘90s. Counts also serves as director of the Friends of the Russell Fork, a nonprofit organization that has worked on various river-related projects over the years, including cleanups and pushing for designation as a Virginia Scenic River.

While there has not been much pushback or contesting from officials, it has been a drawn-out process. Whitewater recreation is not a recognized and listed point on the Army Corps’ official project purpose for Flannagan Dam, so extra releases could not be considered a congressionally authorized event.

According to Bradley, project purposes are a list of priorities that describe why that particular site exists — these motives are weighed against each other. Flannagan Dam was originally built for flood control. However, as time passed, other project purposes were added. It now serves as a municipal water source, provides fish and wildlife habitat and a place for flat water recreation such as boating and fishing.

So the next step in the process is to get downstream whitewater recreation added as a project purpose.

Bradley says until they can get that done, the Army Corps is not authorized to consider whitewater recreation in the dam’s day-to-day operations. The Corps suggested a preliminary study be done to see if a larger feasibility study for more releases from the Flannagan Dam was warranted.

The initial study investigated whether extra releases would impact the ecology of the river and the surrounding environment. The goal was to determine if there were any factors that would immediately rule out the proposed change before undertaking the expense of a larger study.

That preliminary study concluded in March 2017 without finding any obvious factors that would indicate a negative impact associated with adding downstream whitewater recreation as a project purpose for Flannagan Dam. According to Bradley, this outcome means that a full-scale feasibility study can go forward.

Currently, that broader feasibility study is on hold because of funding. Half of the funding for the study will come from federal sources, but the stakeholders must supply the other half through support from foundations, state legislatures or other sources. A definite figure for how much it will cost has not been determined yet.

Once that larger study is conducted — and if it produces a positive result —the Corps could officially consider downstream whitewater recreation a project purpose for Flannagan Dam.

Jason Foley owns Kentucky Whitewater based in Lexington, Ky., one of the commercial outfits that leads trips down the river during the dam releases. He says he has seen a lot of support for adding more dam releases.

While Foley is a business owner with a stake in this project, Bradley described the others involved as a loose collective of whitewater enthusiasts and individuals involved with regional tourism efforts.

“There are those who are passionate about seeing this happen due to the fact that they want more releases for personal use and those who would like to see the impact on the local economy,” Bradley says. He explains that especially rafters who book commercial trips typically also book hotel stays, eat at local restaurants, see plays, go on other tours and take part in other local cultural experiences.

According to Bradley, Breaks Interstate Park is working alongside portions of Eastern Kentucky and Southwest Virginia to build a reputation as an adventure tourism destination, and the extra releases will assist in that effort.

Foley describes these releases as “just a small piece of the puzzle.” He says these releases will definitely help, but they aren’t the silver bullet to save a city or county or solve any one problem.

So will these processes ever come to fruition? Foley says yes.

“I’ll say this, I’ve been apathetic at many times over the years, really apathetic at times, ready to quit,” Foley says. “I’ve never been more optimistic right now that I think they’ll happen. It’s not going to happen on anybody’s time table, it’s going to happen the way the government works — in slow motion, with each gear grinding at its own pace. I do see, in the not super distant future, additional releases happening here. That’s one of the things that’s continued to drive me on this.”