Keeping the Nolichucky “Wild and Scenic” 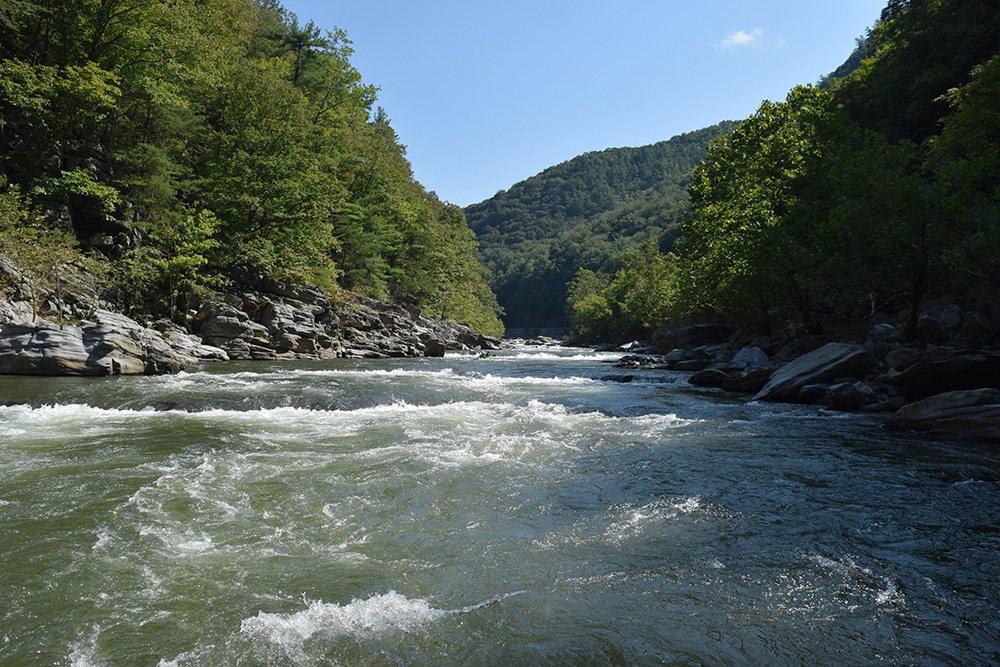 Securing a National Wild and Scenic River designation for a seven-mile section of the Nolichucky River would help protect the gorge, above. Photo by Kevin Colburn.

The Nolichucky River spans 115 miles in two states, winding through forested mountains in Huntdale, N.C., to Douglas Lake in Tennessee. The name is derived from the Cherokee word Na’na-tlu gun’yi, meaning Spruce-Tree Place, according to Western Carolina University professor Brett Riggs in the documentary “Secrets of the Nolichucky.”

A grassroots effort to secure a Wild and Scenic designation from Congress for an approximately seven-mile section of the Nolichucky River kicked off in 2017 with an online petition created by Curtis England, a guide for Nantahala Outdoor Center.

The Wild and Scenic Act, established by Congress in 1968, states that rivers having “remarkable scenic, recreational, geologic, fish and wildlife, historic, cultural or similar values, shall be preserved in free-flowing condition, and that they and their immediate environments shall be protected for the benefit and enjoyment of present and future generations.” Less than one quarter of of 1 percent of United States rivers are protected under the act.

A Wild and Scenic designation would create a quarter-mile corridor of protection on either side of the designated stretch of the Nolichucky where no commercial development would be allowed. That’s good news for the kayakers, whitewater rafters and anglers who enjoy its solitude, beauty and the varying character of its waters.

“It’s really one of the first sections of river that most any whitewater paddler does in a true remote, wild, scenic area,” says Wesley Bradley, the Tri-Cities ambassador for World Kayaks, an organization that aims to develop whitewater kayaking across the globe. “You’re in a wilderness setting instead of a rural setting. It’s a special section of the river.” 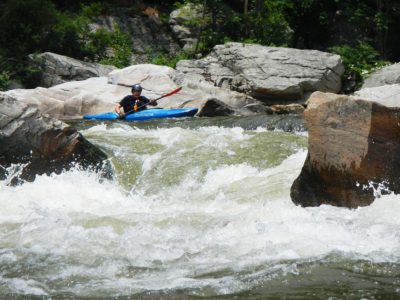 A paddler works through the Nolichucky’s rapids, a popular destination for rafters, kayakers and whitewater canoeists. Photo by Matt Jackson

Running through U.S. Forest Service land, most of the seven-mile stretch beginning in Poplar, N.C., has Class III rapids with some Class IV about a mile and a half down the gorge. Nearing the Nolichucky Gorge Campground in Erwin, Tenn., the river mellows to Class I and II for about 15.5 miles. Bradley describes it as the crown jewel of intermediate whitewater paddling.

Bradley, along with Chris Lennon of Legacy Anglers of Tennessee and Kevin Colburn, national stewardship director of the river conservation nonprofit American Whitewater, embody much of the driving effort behind the Nolichucky Wild and Scenic effort. The 2017 petition, directed at other outdoor enthusiasts and businesses and communities along the river, quickly garnered more than 10,000 signatures, and now has more than 20,000.

Approximately 20 businesses and outdoor recreation organizations have endorsed the proposal. Among the individuals are Tennessee District 4 Rep. John Holsclaw Jr., and mayors from the Town of Erwin and Unicoi County in Tennessee.

Although Lennon states that the U.S. Forest Service has generally managed the river well since it took charge in 1994, those management practices aren’t mandated by Congress and could change at any time.

“It’s our belief and hope that many communities, the region and the river claim the ultimate benefits,” Lennon said. “We want … the Nolichucky management, the way it has been for the last 25-plus years, to continue.”

Lennon explains that the benefits of Wild and Scenic designation include opportunities for recreation, economic development and ecological and cultural education through the growth of tourism.

The designation will also help to protect the watershed by prohibiting damming and other activities that would impede or disrupt its flow and alter the surrounding land. That’s also good news for wildlife that relies on the river, such as the endangered Appalachian elktoe mussel, which can only thrive in clean, free-flowing water, and a flowering plant named Virginia spiraea that is threatened by habitat changes.

“This is one of the Southeast’s last true mountain rivers that supports life the way it’s supposed to,” says Chris Lennon of the fishing guide service Legacy Anglers of Tennessee. “From frogs to herons, trout to eagles, smallmouth bass to endangered or threatened species like the elktoe mussel or the hellbender, it can all be found here. The corridor around the gorge will also help protect isolated populations of the southern brook trout in the feeder creeks and streams.”

It will also benefit the human populations downstream that use the river as a source of drinking water. Sections of the Nolichucky have been listed as impaired over the years due to sedimentation and levels of E. coli that exceed the U.S. Environmental Protection Agency’s limits. Both can be attributed to human activities such as farming and construction.

Several water quality concerns exist downstream from the potential Wild and Scenic section. Dr. Michael Ketterer, a research scientist hired by activists in Greene, Washington and Unicoi counties in Tennessee, announced in October of 2018 that he found enriched uranium downstream of Erwin Nuclear Fuels. October water quality monitoring tests detected thallium, a potentially deadly heavy metal, at the U.S. Nitrogen effluent discharge site in Greene County. The company doesn’t use the chemical and the Tennessee Department of Environment and Conservation wasn’t able to locate a source after further testing. TDEC extended a fish consumption advisory for a downstream section of the Nolichucky that was originally issued in the summer of 2018 due to levels of mercury that exceeded acceptable EPA limits.

According to Colburn, support for the designation has been diverse and homegrown, without any apparent opposition. The only obstacle, he says, is garnering enough public support to sway lawmakers since the designation requires an act of Congress.

“We feel like there is critical mass to get a bill moving,” Colburn says.

“We do not have a plan to introduce a bill anytime soon,” Bradley says. “We want to make sure we have enough support for a bill to be successful. One of our current goals is to continue growing local support for the designation at all levels within the surrounding communities.”

Bradley hopes more interested residents from both states sign the petition and send letters to local, state and federal officials asking them to support the effort.

“Our main goal is to keep the Nolichucky Gorge the way it is now, so future generations can enjoy it the way we do,” Bradley says. “The Wild and Scenic designation is the best way to preserve the river in that manner.”

Visit noliwildandscenic.org to find out more.