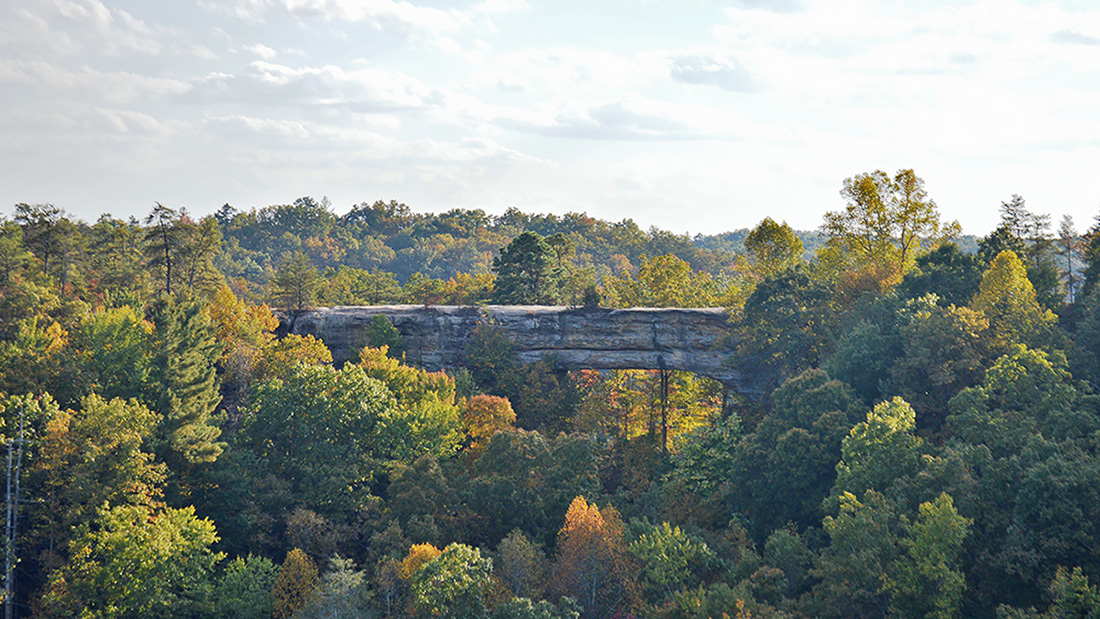 The striking Natural Bridge serves as the namesake of this Kentucky park and offers hikers a stone promenade with views of the Red River Gorge. Photo by Joe Tennis

On the outskirts of the Red River Gorge, hikers at Natural Bridge State Resort Park walk among natural sandstone structures and climb stairs amid thickets of rhododendron and the shade of hemlocks. If you want the reward of long-range views from your workout, then you’re in luck at this jewel near Slade, Ky.

“We have approximately 20 miles of trails,” says Brian Gasdorf, a park naturalist. “The primary reason people come out here is for hiking on our system of trails.”

To gain an overview of the park, start hiking at the Hemlock Lodge for a loop that spans 2.3 miles but will likely leave you feeling you walked twice that length.

This route begins on the “Original Trail,” which crosses through a shady forest of Eastern hemlock, white pine and red oak, interspersed with odd sandstone formations.

Handrails line much of this trail. Yet you may soon be huffing and puffing just like the steam trains did in the 1890s, when this park was developed by the Lexington and Eastern Railroad.
“We have a sign that says it’s the shortest and easiest route to Natural Bridge,” says Gasdorf, laughing a little. “Shortest is definitely the truth. Easiest, I think, was just put on there because it is the shortest.”

The trail makes a 350-foot elevation gain from the lodge to ultimately arrive at the sandstone arch, which stands 65 feet high and spans 78 feet in length.

“It’s one of the larger arches in the area,” Gasdorf says. “It has sort of a magnificent way that it stands there. And people like it because you can walk on top of it. We don’t have any railings on top, so there is the real natural element to it.” 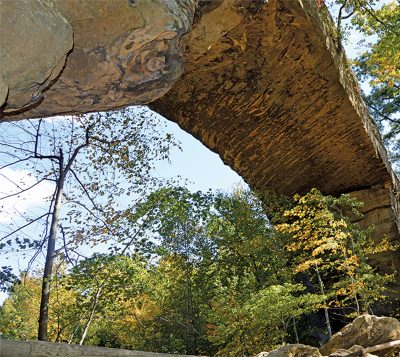 Cross under the bridge and look left for a narrow passage known as “The Squeeze.” Geologically, Gasdorf says, “The Squeeze” is a vertical fracture that may have separated during an earthquake to form a passage with sheer walls.

After squeezing through, turn left to cross atop the 24-foot-wide Natural Bridge. The view from here overlooks the Red River Gorge landscape, with distant sandstone cliffs towering over lush valleys.

Continue following the Laurel Ridge Trail for about a half-mile, or maybe more, before arriving at a cliff called Lookout Point. This is what Gasdorf considers “probably the second-most visited lookout at Natural Bridge because you can actually get a picture of Natural Bridge itself from a distance, looking across the valley.”

Beyond Lookout Point, continue another half-mile to a dead-end at Lover’s Leap Overlook. “When you’re standing there, you actually look out to another outcropping rock,” Gasdorf says. “And what’s interesting about that location is we think there used to be an arch right there, spanning all the way across to that outcropping rock. That arch has since collapsed.”

That outcrop goes by several names, including Profile Rock, because the lower part of the rock can look like the profile of a face when seen from a certain angle. According to Gasdorf, this fallen arch is also known as the Devil’s Pulpit because it looks like the face has a podium in front of it.

Backtrack from the cliff about a quarter-mile, and you’ll come to a choice on how to travel back down. First, you can try the Needle’s Eye, a stairway built by the Civilian Conservation Corps in the 1930s. Or you can walk about 300 feet further to go down the Devil’s Gulch, a narrow chute with a rock wall on the left edge, which Gasdorf notes may be more treacherous. “They’re both very steep stairways,” he says. “And a lot of folks really enjoy them for the excitement of it.”

Hiking under these up-and-down conditions is not your typical walk in the woods, Gasdorf says. “Just a mile here can seem like a very different experience for somebody when they’re not quite used to that, so it’s something that they need to keep in mind.”