By Melody Reeves and Chuck Shuford 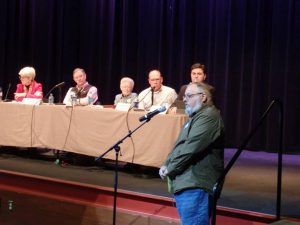 “From 2001 to 2008, medical expenses were the leading cause of bankruptcies in the U.S., and health insurance premiums for family policies increased by 78 percent while the cost of living rose 17 percent,” began Dr. Raymond Feierabend, professor emeritus at the James H. Quillen College of Medicine at East Tennessee State University.


Feierabend was speaking at an educational forum Feb. 22 on the potential impact of repealing the Affordable Care Act, also known as Obamacare.

Over 130 residents from Southwest Virginia attended the public forum at Mountain Empire Community College in Big Stone Gap, Va. The event was sponsored by We Care SW Virginia, a local group of citizens advocating for affordable, high quality health care for all. 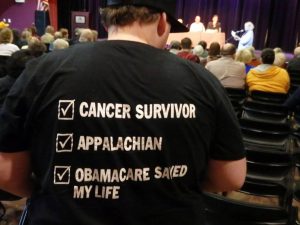 The back of forum attendee Matt Skeens’ t-shirt has a clear message. Photo by Maxine Kinney

Other presenters included Jim Dau, director of Virginia AARP; Beth Davies, director of the Addiction Education Center in Pennington Gap, Va.; and Stephen Sanders, director of Appalachian Citizens’ Law Center in Whitesburg, Ky. Together, the speakers made the case that universal health insurance coverage with access to affordable, comprehensive health care is a key component of any economy that adequately sustains its citizens.

The panelists explained the impact of both the ACA and potential repeal proposals on Medicare, black lung benefits and rural health care. Based on a 2016 bill to repeal and replace the ACA, nonprofit think tank the Urban Institute determined that an estimated 685,000 Virginians would have lost insurance coverage by 2019.

Following the presentations, audience members gave testimony and asked questions. A retired coal miner with black lung disease stated that while not perfect, the ACA offered the best hope so far for those seeking black lung benefits. Under the ACA, it is easier for coal miners who have spent at least 15 years working in the coal industry to get those benefits than it was before the law. 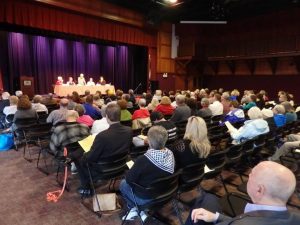 Many Southwest Virginia residents came to the forum to learn more about the potential impacts of changes to the Affordable Care Act.

Ron Short, a resident of Duffield, Va., told how his nephew, who had no health insurance, had gone to the emergency room several times with severe stomach pain and received only pain medication. After receiving insurance through the ACA, his nephew went through a battery of tests that revealed he had cancer. “This is what people face every day,” said Short.

We Care spokesperson Peggy Mathews said that the purpose of the forum was to help people understand how the ACA affects them and inspire them to communicate any concerns about changes to the health care law to their federal senators and representatives.