By Willie Dodson and Bonnie Swinford 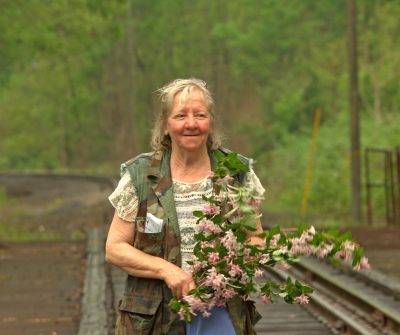 Carol Judy of Roses Creek, Tenn., passed away from cancer in the early morning hours of Feb. 24, 2017. She died at home, surrounded by the love of family and friends.

I’ve always been fond of explaining to folks who Carol Judy was by simply stating her email address, emphasizing every word in it: Forest Granny (at) Rise Up (.net). Carol Judy was an activist, an agitator, an educator and an organizer.

Carol was also a root digger, carefully tending scattered patches of ginseng and other medicinal herbs along the densely wooded hollers and hillsides surrounding her Tennessee home. Carol practiced and taught a slow, patient, stewardship-based approach to foraging and cultivating wild and wild-simulated medicinals. She taught plant identification and forest understory stewardship and management workshops across the region.

Carol was a mother, a grandmother and a dear friend to many. She cared deeply for her people, and stayed focused on involving others — especially young people — in the work of building community resilience.

Throughout the ‘80s and ‘90s, Carol traveled internationally as part of the Rural Development Leadership Network, the National Congress of Neighborhood Women and numerous other projects lifting up rural women and other disenfranchised populations. During the same time, she organized locally in Claiborne County, Tenn., with the Woodland Community Land Trust and the Clearfork Community Institute. 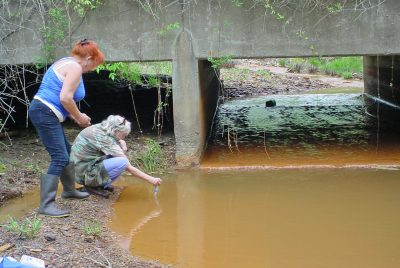 Over the past decade, Carol worked closely with Mountain Justice and other anti-mountaintop removal coal mining organizations in the region. She was a treasured and revered elder to a generation of young organizers, herbalists and righteous mischief-makers.

Hear Carol Judy share her thoughts in a video interview with Felix Bivens of Empyrean Research.

Anything Will Give Up Its Secrets if You Love It Enough

For several years, Carol had heard stories of our family’s land in Rockcastle County, Ky. In May of 2016, she came for a visit.

Along the hike down our rutted out driveway, we pointed out patches of lady’s slipper, bird’s foot violet, showy orchis and hawkweed. Carol greeted them as friends. We stopped at the cave spring for a drink and to visit the sole ginseng plant the poachers had missed the year after we left. She started exploring the forest floor. “There’s one!” she said, and cradled it like a baby bird. “Well, there’s another,” she said, as a matter of fact. She kept going, counting in all about 15 plants that had, until that moment, been completely invisible to us. 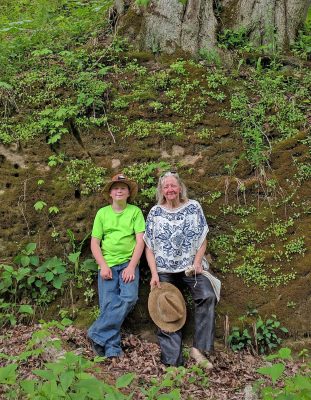 Carol was known for connecting with youth and building strong intergenerational bonds. She stands with Asa Gardner Smith during a visit to the Smith family land. Photo by Chris Smith

We took her to the rock house waterfall and told her about an elusive patch of goldenseal. On the way back, she wandered off trail, turned around and said, ”What about this yellowroot patch here?” Again, she had made the invisible visible. She told us we’d better start harvesting that patch regularly, or it would start to disappear like that other one.

We remember how much Carol loved the mountains and the waters, the plants, and everything that lives here. We are so thankful for the time we had to learn from her how to grow that love within ourselves. And we will never forget that day when we got to experience that magic of silent communion with our land, with the life on it, and with our dear friend.

A Tribute to Carol Judy by Adam Hughes

I’ll never forget driving to Lexington, Ky., with Carol for a public hearing on the Stream Protection Rule in September 2015. The hearing was held in a gymnasium, and Carol signed up to testify later than the rest of our group.

By the time she was finished, we had gathered outside to debrief. I saw her hunting for us through a window, but by the time I navigated the heavy glass doors, she had already stepped on the descending escalator.

“Carol! We’re up here!” I called. She looked back, grinned, turned around, and started climbing up against the elevator’s descent! She was already about a third of the way downstairs; she had to hustle, but progress was still slow. She started laughing, tickled by the petty mischief of what she was doing.

The commotion alerted a security guard, who called on her to stop. “Just go to the bottom,” he barked. “Come on, act your age.” Naturally, this encouraged her to climb faster, and she shot him a naughty smile when she reached the top and rejoined our group.

That was one of the most wonderful things to know about Carol Judy. She’d never act the way a man in uniform would demand.

A Tribute to Carol Judy by Miranda Brown

This woman, Carol Judy, showed me so much that is to be the foundation of my future, perhaps all of our futures. She embodied love, sincerity, presence, generosity, passion and intention. She never took me for what I projected on the surface, but called me out of myself, reassured me of my own nature.

Carol always called me a singer and an herbalist, even when I had naught to show for it. I carry her spirit and will listen for her guidance as I fulfill my own life. Carol always probed down to the core of who and what was important to me, and reminded me. Tonight, she reminds me again.

What a blessing to have spent some time with this force of nature. Rest in peace, nestled in the love that so many of us have for you, like the roots that lie nestled in the soil.

A Tribute to Carol Judy by Tabitha Potter-Cornett

I grew up with Carol as so many of us have. When I was tiny and spent one summer selling brownies to mamaw’s friends. She was there and she supported my growth. When I was a teen I rebelled against my mamaw and wanted nothing to do with social justice. Carol invited me out anyway without judgment when I declined, knowing I’d get around to it. When I dropped out of college and moved back home. Carol gave me about a month to sit around then there she was pushing me to grow. I don’t remember everything I did with Carol, how could I? She taught me how to care about people. It truly never mattered what someone was up to, Carol knew there was more under the surface.

In this article it talks about a tree that fell hundreds of years prior. Normally the stump would have rotted away to nothing. But the trees around it supported it. Some of the stump did rot, but the roots were alive. Carol may be gone, but the roots she planted are still here in each and every one of us. It’s time for us to take care of what she left us. It’s not what we’re accustomed to of her, but it’s beautiful all the same.

Putting on My Carol Glasses

Though my path has taken me out of the forest and into the city, I think of you often – and sometimes I think of “putting on my Carol glasses” seeing the world through its inter-connectivity, the liveliness of wild things – from the rats that skitter in the subway here to the yarrow that grows up in cracks in the sidewalk, or eating a few blossoms of rose bud from decorative trees in the park when no one is looking.

I want you to know that I am bringing some new friends to Pine Mountain soon, friends for whom the forests, mountains of Appalachia, and human communities there are yet to be known. It’s part of a project of exchange between urban artists – the community I now spend most of my time in – and rural artists and communities. We will be there in early March, and then returning in May, around the time of year I met you on that ridge top. I hope to pass on a tendril of that love of place you shared with me and so many others. You will always be in my mind and heart as a guide for seeing, learning about, and becoming a part of a place and all the beings that inhabit it.