DuPont and its spin-off The Chemours Company agreed in February to pay $671 million to settle thousands of lawsuits regarding the leak of a toxic chemical used to make Teflon from their plant in Parkersburg, W.Va.

Around 3,550 personal injury claims were filed beginning in 2001 after the leak of perfluorooctanoic acid, also called PFOA or C-8, allegedly contaminated the Ohio River and local water supplies. A panel of scientists convened by DuPont determined that the chemical was linked to six diseases: kidney and testicular cancer, ulcerative colitis, thyroid disease, pregnancy-induced hypertension and high cholesterol.

Both DuPont and Chemours denied any wrongdoing, saying in a statement that DuPont had not used C-8 at the plant in over a decade. The class-action lawsuit included citizens in the Parkersburg area and surrounding water districts affected by the leak. — By Adrienne Fouts

Trout Delivered to Gatlinburg After Wildfires

In early March, the Tennessee Wildlife Resource Agency stocked streams in the Gatlinburg and Pigeon Forge area with roughly 3,000 trout from a Middle Tennessee hatchery.

During the devastating fall 2016 wildfires in East Tennessee, about 30,000 fish were killed at Gatlinburg’s fish hatchery and trout raceways, where fingerling fish are raised until they can be placed in nearby streams. — By Molly Moore 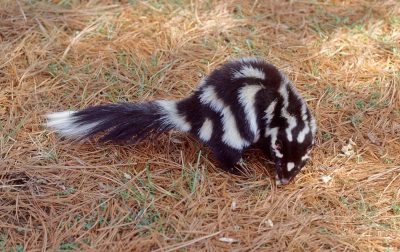 Courtesy of KY Dept. of Fish and Wildlife Resources

The Kentucky Department of Fish and Wildlife Resources is asking community members to help document a rare species of skunk in eastern Kentucky.

The “spotted skunk” is a protected species with a distinctive fur pattern, not to be confused with the common striped skunk. The department is asking the public to share photos and locations of spotted skunk sightings on the agency’s Facebook page. According to the department’s social media post, they have few documented observations and need more. — By Adrienne Fouts