The Free-Roaming Horses of Eastern Kentucky

This pair of horses — a tan female and gray male — were out on an Eastern Kentucky mountaintop on a rainy morning. Photo by Jack Dean III

Kentucky may be the home of Lexington — the Horse Capital of the World — but in the eastern mountains, it can be difficult for farmers to find enough pasture for their horses.


The mountain forests are generally too dense for grazing. But after surface coal mining, mining companies are often required to plant grass fields to reclaim the land. Ginny Grulke, the volunteer executive director of the Appalachian Horse Center in Eastern Kentucky, says it became tradition in the 1970s for Kentucky farmers to release their mares onto reclaimed mine lands to let them graze on the unused fields. The horses were easily managed in their small populations, and without stallions there was no breeding.

The Appalachian Horse Center was founded in 2013 to help solve issues that arose with free-roaming horses after owners began leaving the horses on the mountains year-round.

“Everything kind of changed in 2008 when, due to the recession, people started simply taking their horses up there and abandoning them because they couldn’t afford to keep them,” Grulke says.

While the former mine lands have lots of space and food for the horses, the problems came when stallions were released onto the mountains. According to Grulke, this led to “indiscriminate breeding” and expanding herds. Mares that breed every year must care for one foal while pregnant with the next one.

This takes a significant toll on the mother, especially during winter months when grazing is more difficult. While many horses may grow hungry in the winter and venture down the mountains for food, Grulke says it is natural for the horses to lose weight and appear skinny in the winter. Still, the Appalachian Horse Center aims to provide hay and salt blocks during harsh winter weather.

According to Grulke, overgrazing on former mines is a rare problem that does arise when horses eat the growing shoots before the grasses are established. This can be a problem for mine operators who must reestablish vegetation before they can get their bonds released. When coal companies begin mining, they are required to set aside money, in the form of bonds, to pay for cleanup when mining is complete. Those bonds are returned to the company if they they restore the grounds to satisfactory condition. 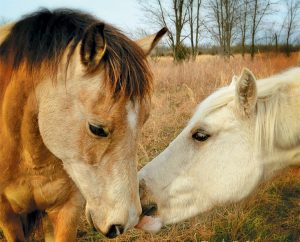 Domesticated, feral and wild-born horses find their home in the mountainous landscape. Photo by Timothy Hudson

Once the grass is established, the horses can actually help with the process of recovering the land. Grasses that are grazed “tend to put out stronger root systems,” Grulke says, and the manure enriches the low-quality soil left from the mining process.

The Appalachian Horse Center has counted 450 horses on the mountains, but some estimates are above 3,000, according to a 2015 article in the Lexington Herald-Leader. Some of the horses are owned, domesticated and cared for, while others are feral or were born wild.

Feral horses were once domesticated, but have been living in the mountains long enough to become essentially independent of humans. “It’s not that [those horses] are afraid of [humans], but they could care less about interacting with them,” Grulke says.

Wild horses, however, have never experienced human handling and were born on the mountains without human intervention. Wild horses are more timid around people and are often harder to find or catch.

Grulke explains that the free roaming horses rarely need to be caught unless they are causing property damage, such as eating crops and shrubs, or posing a public safety hazard by crossing roads. When this happens, the county’s animal control centers or local sheriffs round up the horses and input their information into a database in hope of an owner claiming them.

Horses graze in the mountains of Eastern Kentucky. Many roam free on former coal mine sites. Photo by Timothy Hudson

If the horses are unclaimed after 15 days, they are made available for adoption. According to Grulke, most counties in the area don’t have a place to hold the horses during this process, so horse rescue organizations and local residents often give the horses temporary homes. The Appalachian Horse Center plans to help hold the horses while they are waiting to be claimed by their owners or for adoption.

“We are a nonprofit, but the business model is to generate revenue out of tourism in order to underwrite the equine therapy services, the adoption process, keeping the horses and so-on,” says Grulke.

The Appalachian Horse Center hopes to attract tourists drawn by the same joy that the locals get from visiting the horses on the mountains.

Grulke says she has seen families, many of whom don’t own horses, drive to the areas frequented by horses to pet them and feed them apples and carrots.

“It’s just for them a really nice kind of enjoyable thing to do,” says Grulke. “It’s entertainment.”

In Lexington, tourists rarely get to touch the horses, but the Appalachian Horse Center plans to have a hands-on program where visitors can learn to halter, lead and brush the horses. Grulke believes this will be good for families — and for the horses too.