From Clintwood to Ferrum, from Glen Lyn to Galax, The Crooked Road is Virginia’s Heritage Music Trail. Thousands seek out the 330 mile-long route each year to hear the sounds of America’s roots music, which gave rise to bluegrass and country traditions. Nine major venues, 60 affiliated venues and festivals, and 26 wayside exhibits delineate the trail that follows much of Route 58, along with other sites across Southwest Virginia. But throughout the Appalachian region, The Crooked Road has come to symbolize much more: how a region can leverage its cultural assets to develop a new economy. 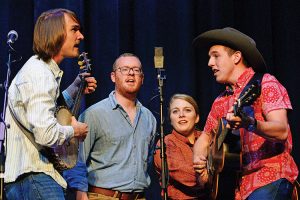 Tyler Hughes and his band perform at Lee Theatre in Pennington Gap, Va., during the 2016 Mountains of Music Homecoming. Photo by Jennifer Meade.

Fourteen years ago, on a January day with six inches of snow, 26 people showed up for a meeting to talk about a radical idea for Southwest Virginia — building an economic development plan around the region’s traditional music heritage. Some drove from over 100 miles away.

“It was very surprising, and I like to say the Holy Ghost came down,” says The Crooked Road co-founder Todd Christensen. “No one was in charge and everyone got turned on to having a music trail and having traditional music as the central development piece for our entire region.”

Christensen initiated the idea for The Crooked Road with folklorist Joe Wilson and currently serves as the first executive director of the Southwest Virginia Cultural Heritage Foundation. He likened the founding to a stone soup supper, where artists, musicians, folklorists and economic development professionals contributed their skills to plan the “first step of our efforts to develop a creative economy in Southwest Virginia.”

“It was a grassroots movement in the beginning,” says The Crooked Road’s Executive Director Jack Hinshelwood. “But people had enough vision to come together and see that the idea for a music trail had potential.”

Today, The Crooked Road is run as a nonprofit that helps communities celebrate their heritage, weaving together the unique roots-music stories of 19 counties, four cities and over 50 communities.

Bookended by the Ralph Stanley Museum in Clintwood, Va., and the Blue Ridge Institute and Museum in Ferrum, Va., The Crooked Road is anchored by nine major venues, including the Carter Family Fold, the Blue Ridge Music Center, the Floyd Country Store and the Country Cabin — the longest continuously run place to see live heritage music in the region.

Activities along The Crooked Road peak in the summer with festivals and fiddlers conventions. From June 9 to 17, the Mountains of Music Homecoming highlights 23 communities that work together to put on cultural events like public concerts, quilt demonstrations, lectures, outdoor movies, canoe floats and historic church tours.

“Mountains of Music Homecoming represents all the different things that communities are proud of, making it accessible to people in their community and people from other communities,” says Hinshelwood.

But throughout the year, there is something different to hear and to see. A jam session or concert can be found nearly any night of the week in Southwest Virginia, says Hinshelwood, and many are listed on The Crooked Road’s website.

“The Smyth County Jam has a wonderful jam on Monday nights. Thursday nights, we have a great jam at the Heartwood in Abingdon,” he says. “Pretty much any time someone comes, there is something to do and see. There is way more than you can see, even in a two-week trip.”

During the summer of 2015, the Virginia Tech Office of Economic Development studied the economic impact of The Crooked Road on the region. This study found that, “The Crooked Road facilitates $6.4 million of tourist spending annually in Southwest Virginia, resulting in $9.2 million of total economic impact annually and an equivalent of 131 full-time jobs in the region.”

Boosting the local economy was a primary reason for the creation of The Crooked Road. According to Christensen, in June of 2003, the original organizers of The Crooked Road set out two ambitious goals. “One, to make Southwest Virginia nationally known as a tourist destination, which at that time it wasn’t,” Christensen says. “And two, to triple the cultural heritage revenues in the area.”

The excitement about the trail quickly grew. “Within 18 months, The Crooked Road was getting international and national press,” says Hinshelwood. “We’re now in our second decade, and it continues to be written about in international publications.”

Nearly 42 percent of the trail’s visitors come from outside the region, and almost half of these individuals “said they came primarily for The Crooked Road,” stated the Virginia Tech study. This included visitors from Canada, France, Australia and the United Kingdom.

But The Crooked Road does much more within the region. According to the Virginia Tech study, “regional officials indicated the importance of The Crooked Road in encouraging ‘pride’ in the region’s rich cultural heritage.” This most notably occurs through The Crooked Road’s Traditional Music Education Program’s partnership with Junior Appalachian Musicians, which teaches children to play and dance to traditional old-time and bluegrass music.

Hinshelwood echoed the power that The Crooked Road has brought to Southwest Virginia. “By working with The Crooked Road, I’m really working around people that are positive and care deeply about the future of our region,” he says.

The founders of The Crooked Road progressed to developing artisan networks in every county, which led to the development of a recreational outdoor network called Appalachian Spring.

These new endeavors have a promising example to follow in The Crooked Road, which has created a new way for communities in Southwest Virginia to work together to build local economies.

“Folks who are interested in cultural heritage or environmental stewardship can, now, band together with economic development people to realize that by working together we are all furthering each other’s objectives,” states Christensen. “The Crooked Road set that example: preserve the music and make it more accessible to people,” he continues. “You don’t compromise your assets for economic development; you build upon and promote them.”