Standing Against the Mountain Valley Pipeline 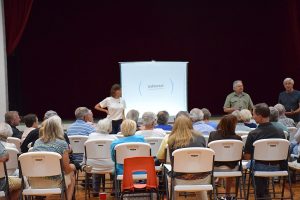 Hundreds of concerned Virginians attended a series of meetings about the proposed pipeline.

Throughout September, we met with hundreds of concerned residents along the path of the proposed Mountain Valley Pipeline in places such as Summers and Monroe Counties in West Virginia and Roanoke and Montgomery Counties in Virginia. The pipeline would carry natural gas from fracking operations in West Virginia for 301 miles, crossing through public lands, private properties and more than 1,000 waterways.

At the meetings, which were held along with the Sierra Club Virginia Chapter and the Protect Our Water Heritage and Rights coalition and their local member organizations, we discussed the pipeline’s timeline and the Federal Energy Regulatory Commission’s permitting process, as well as current and upcoming opportunities for public comment. We also reviewed county-specific threats including water quality, vulnerable karst geology, property rights and community safety.

In mid-September, federal regulators released the draft environmental impact statement for the Mountain Valley Pipeline. The draft fails to adequately assess the public need for the project — a recent report shows that existing infrastructure could meet demand until 2030. The federal review also discounts the widespread threats to private property, public lands, local communities, water quality and the climate. Read more about the pipelines here.

“Running a massive gas project through the steep, rugged terrain laced with dozens of rivers and headwater streams is a perfect storm for major damage to our water resources,” says Lara Mack, Virginia Campaign Field Organizer with Appalachian Voices. “FERC also fails to meaningfully address the safety issues and other concerns so earnestly voiced by hundreds of homeowners and landowners along the route.”

Public comments on the MVP draft environmental impact statement are due Dec. 22. To submit a comment, visit appvoices.org/fight-mvp