With the White House, Appalachian congressional seats and some governorships up for grabs, votes cast this election cycle will impact the region for years to come. But will mountain voters go to the polls? 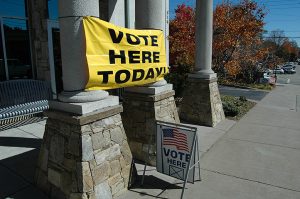 If history is a guide, voter turnout in Appalachia for the November election will be significantly lower than most of the rest of the nation. Lower turnout for presidential elections has been a consistent pattern in Appalachia, dating at least back to the 2004 election, according to scholars.

Turnout in Appalachia for the 2012 election — measured as a percentage of the voting-age population that cast ballots for president — was 55 percent, compared to 60.5 percent in the rest of the nation, according to an analysis by Geoffrey Skelley, associate editor of Sabato’s Crystal Ball at the University of Virginia’s Center for Politics.

David Sutton, former director of the Center for Appalachian Studies at Appalachian State University, studied turnout in the 2004 and 2008 presidential elections. In articles for Appalachian Journal, he cited significant turnout differences between counties in Appalachia and counties outside the region.

In 2004, 14 Appalachian counties in Kentucky had turnout at least 10 percentage points below the state average. Eight of the 10 counties with the lowest turnout in Ohio were in Appalachia. In Virginia, turnout in the 9th Congressional District was more than four points lower than the statewide average.

In 2008, West Virginia, the only state entirely within the boundaries of Appalachia, tied Hawaii for the lowest turnout rate at 50.6 percent. Many Kentucky coal counties had turnout below 50 percent.

In a 2012 pre-election blog post, Dustin Cable, then with the University of Virginia’s Weldon Cooper Center for Public Research, wrote, “The lowest turnout regions of the country in 2008 were in Appalachia and parts of the South, regions with fewer people with college degrees and higher than average poverty rates.”

While voter turnout rates seem definitively correlated with both income and education, the factors that drive that correlation are complex, says Michael McDonald, associate professor of political science at the University of Florida and creator of the United States Election Project blog.

“It’s very clear that the more educated you are, the higher your turnout,” McDonald says. “The disagreement is about the causation. It could be that more participatory people seek out more information.”

“There is a cyclical process where, by the virtue of the fact that politicians aren’t putting issues on the table that appeal to lower-income voters, it becomes hard to convince them that their vote matters,” Martin says. “At the same time, the only way to get politicians to pay attention to you is to have high turnout.”

When parties and politicians make an effort to boost turnout in an area, it boosts voter participation, according to Martin. “But they also focus on the people they think will come out. Parties are strategic and don’t want to throw away limited resources on folks who are unlikely to vote.”

Campaigns use data to decide who to contact, Martin says. “It’s one of those awful chicken-and-egg situations. If parties acted differently, it might cultivate more participation. Voters might change their minds about what’s in their best interest.”

Voting is a habitual behavior, Martin says. Once someone starts, they are likely to keep voting. Because of that, age is a stronger predictor of voting than income. “People participate because they think they’re wanted,” he says. “If they’ve been neglected or left behind, it becomes difficult to convince folks their voices matter.”

Roy Silver, a professor of sociology at Southeast Kentucky Community and Technical College, agrees that Appalachians may not see the value of voting. “Part of it is that people don’t see these politicians and their platforms addressing their basic needs,” he says. “The influence of money in politics also inhibits greater participation. It creates cynicism and reinforces the notion that we have a plutocracy and that the system is rigged.”

Short of convincing parties and candidates that Appalachian areas are worthwhile investments for get-out-the-vote efforts, there are some voting reforms that might help raise turnout rates, McDonald and Silver say. “What you really need is something like election-day registration,” McDonald says. “If you were looking for a reform that would do the most good, automatic registration, with an opt-out for those who don’t want to register, would probably have a lot of effect.”

Voting needs to be more accessible, Silver says. “Our polls in Kentucky are open from 6 a.m. to 6 p.m. That inhibits people who work from getting to the polls, particularly for those who work in the mines. Making all the voting places more accessible, making registration more streamlined — these would all help.”