Age-old crop could help lead to economic diversity in Appalachia 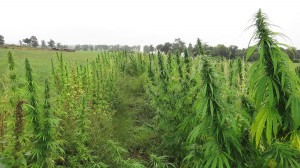 As the result of a new law that takes effect on July 1, Virginia farmers will soon be able to grow hemp for industrial purposes — albeit with restrictions.

Even though the law is new, the crop is not. Industrial hemp has been grown around the world for centuries, offering thousands of uses, none of which involve “getting high.” 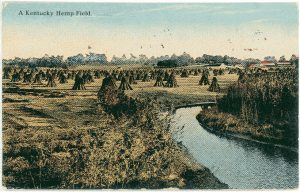 A postcard of hemp fields at the turn of the 20th century. Image courtesy of University of Kentucky Special Collections Research Center.

In fact, according to Chase Milner, the Shenandoah Valley regional director for the Virginia Industrial Hemp Coalition, “Industrial hemp has been grown by human civilization for at least 12,000 years for fiber, food, and now recently bio-fuels.”

He noted that a 1619 Virginia law required farmers to grow hemp, a critical component of sailcloth, textiles and rope, and three of the Founding Fathers grew hemp on their Virginia estates. Ben Franklin owned a mill that made paper from the plant, and the Declaration of Independence was drafted on hemp paper. 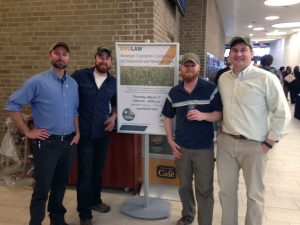 The Virginia Industrial Hemp Coalition’s leadership team (top) at a conference on industrial and medical cannabis in Morgantown, W.Va., in March 2016. Photo courtesy of Chase Milner.

According to Milner, the full benefits of industrial hemp won’t be realized until federal law is changed. “Congress remains the industry’s greatest hurdle, as hemp still is defined as marijuana via the Controlled Substances Act,” he wrote.

Still, Virginia’s new law has its limitations, Milner explained. “Currently, under the federal Agricultural Act of 2014, the only lawful purpose for which industrial hemp may be grown is for research conducted by an institute of higher education or a state department of agriculture.”

Before industrial hemp gains widespread acceptance, policy makers need to understand the difference between the crop and marijuana. The most significant difference is the level of tetrahydrocannabinol, or THC, which is the chemical that gives marijuana users their “buzz.” Industrial hemp contains very low levels of THC — about 0.3 percent — while marijuana can contain up to 20 percent.

According to Mike Manypenny, a former three-term member of the West Virginia House of Delegates who championed industrial hemp while serving in the legislature, the environment would benefit from fully legalized industrial hemp. A farmer, he has been granted a provisional license to grow the crop this year for research.

“Here in West Virginia and across Appalachia, we are inundated with environmental damage caused by the extraction industries. Coal mining has left unimaginable environmental damage to our soils, water and air across our once pristine landscapes,” Manypenny wrote in an email. “We can use industrial hemp to help remediate those soils through bio-remediation, where the plant takes up the metals and toxins left behind from the mining and processing of coal or other industrial practices. This in turn can reduce the amounts of metals and toxins leaching into our streams, rivers and into our aquifers.” However, researchers acknowledge that since information regarding the effects of toxins on industrial hemp is incomplete, any such use of the plant would require that it be disposed of in a special manner, likely consistent with any disposal requirements for the toxin being absorbed by the plant.

Ryan Huish, an assistant professor of biology at the University of Virginia’s College at Wise, agreed that the crop can be environmentally friendly. “Hemp requires little to no chemical input to grow well, thus avoiding the use of pesticides, herbicides, and chemical fertilizers,” he stated. “It also has the potential of reducing the need to harvest trees for pulp and building materials, thus preserving more of our forests.”

Milner described how hemp also sequesters carbon in a way that enhances soil quality while reducing levels of climate-disrupting carbon dioxide in the atmosphere. The crop is also a nutritious food source. “Hempseed provide a remarkable plant based protein diet for human, livestock, and wildlife consumption,” he added.

Huish observed, “the scientific name itself includes the Latin ‘sativa,’ meaning, ‘cultivated,’ emphasizing its eminence as a domestic crop.” As West Virginia adjusts to having less employment from the shrinking coal industry, Milner and Manypenny both suggest that industrial hemp could serve as an economic engine to help fill the gap. “Appalachia offers one of the most pristine environments for growing industrial hemp,” Manypenny said.

Milner stated, “The Hemp Industries Association has reviewed sales of clothing, auto parts, building materials and various other products derived by foreign-grown hemp, and estimates the total retail value of hemp products sold in the U.S. in 2014 to be at least $620 million.”

Yet, he remains hopeful. “For many, including me, hemp brings hope,” Milner shared. “Hope for a planet that needs healing, hope for a more sustainable agrarian future, hope for more locally sourced foods, renewable fuels and fibers. Hope for health care products that do not pollute the environment and will lessen our use and impact of synthetic pesticides, insecticides, and petroleum products.”

The Legal Status of Hemp in the U.S. & Appalachia

Producing and cultivating industrial hemp has been nearly impossible in the United States for roughly 80 years, when the U.S. Congress passed the Marihuana Tax Stamp Act of 1937 placed an extremely high tax on industrial hemp, making it unprofitable. Though that law was overturned by the U.S. Supreme Court in 1969, Congress responded in 1970 with passage of the Controlled Substances Act. It listed marijuana as a Schedule 1 substance — meaning that it is considered among the most harmful of drugs. At the time, industrial hemp was not distinguished from marijuana.

That changed two years ago, when President Obama signed the Agricultural Act of 2014, which allows universities and state agriculture departments to cultivate industrial hemp for limited purposes. Emboldened by this evolution, several states in Appalachia have loosened their own laws and are now looking to industrial hemp as a way to promote economic diversification and environmental preservation, especially in the rich earth that nurtures the farmlands of the region.

In Kentucky, a five-year research and licensing program is overseen by the University of Kentucky Agricultural Experiment Station. Established in early 2014, there are five projects across the state, including one project to determine whether industrial hemp could be used to remediate tainted soil.

In North Carolina, a law took effect in October 2015 that recognizes the potential importance of industrial hemp and established a commission to create and regulate an industrial hemp program. It also established licensure and reporting procedures and distinguishes hemp from marijuana. Yet the commission has not been funded by the General Assembly.

In summary, no state in Appalachia allows the production and cultivation of industrial hemp without some sort of governmental oversight and control, but acceptance of the crop is growing.

UPDATE: At press time, Tennessee was accepting applications for the 2016 growing season. The online article has been updated to reflect that the application period is now closed.