Appalachian communities are pulling together to boost the region’s economy 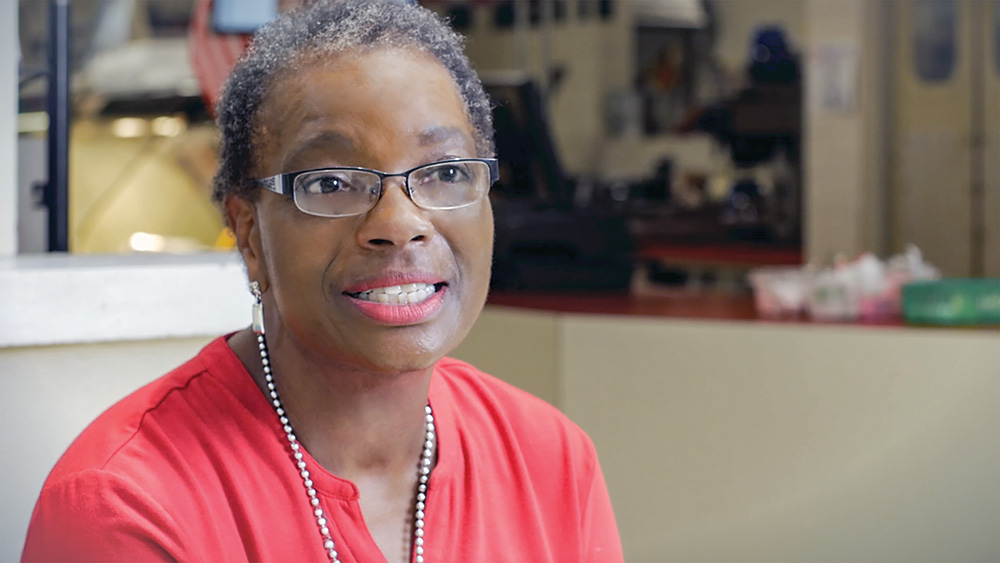 In Letcher County, Ky., Gwen Christon has kept Isom IGA, the only grocery store for 10 miles, open for more than 20 years despite the region’s economic downturn. When she needed help with the store’s utility bills, Christon reached out to Kentucky nonprofit organization Mountain Association for Community Economic Development. 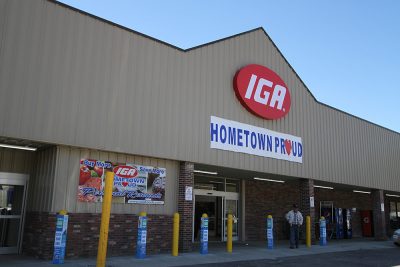 “This community is my community,” Christon told MACED. “I love it, I’m proud of it, I want it to survive. I just think [the store] gives stability to our community.”

“In order for those dollars to circulate in local markets, there has to be locally owned businesses that provide the goods and services that people need,” says Hille. “We need to make these communities once again places where people want to live.” 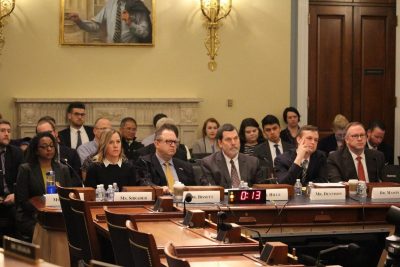 In February, Hille and other Appalachian community leaders testified before the House Subcommittee on Energy and Mineral Resources about the importance of helping the region transition from a fossil fuel-based economy. Hille said that Kentucky lost 10,000 jobs — half of the state’s coal jobs — when natural gas became cheaper than coal in 2012. But he stated that even prior to coal’s downturn, Appalachia had faced economic difficulties for generations.

According to Hille, economic distress has contributed to the region’s comparatively low rate of people with higher education, a track record of poor health statistics, and a mass exodus of young people from Appalachia due to a lack of jobs. In his congressional testimony, he wrote that this has resulted in “a population that is disproportionately made up of the very old, the very young, and many who are unable to participate in the labor force. We also face the same opioid epidemic that plagues many other rural areas. All of that was true before the collapse of the coal industry.”

Hille states that an ideal economy focuses on multiple industries, is environmentally minded and provides opportunities for all.

“Even if we could replace those 10,000 jobs that were suddenly lost, it would only put us back to where we were 10 years ago, and 10 years ago the region was still characterized by deep, persistent economic distress,” he says.

According to Hille, Appalachia’s economic problems are part of a cycle intrinsically linked to a declining population. He states that amenities and resources such as retirement communities, healthcare, farmers markets, music venues, craft breweries and more can be opportunities for local entrepreneurs while also helping the tourism industry.

In West Virginia, Stephanie Tyree works to help develop and grow local leaders in rural areas across the state as the executive director of the nonprofit West Virginia Community Development Hub. The Hub then connects these leaders to one another so that they can be a part of the bigger movement to revitalize small West Virginia towns.

One part of this movement is Turn This Town Around, an initiative co-sponsored by the Hub that aims to help West Virginia towns identify and complete innovative projects. At a 2015 meeting in the community of Whitesville, population 500, residents proposed turning an old railroad corridor into a 15-mile multi-use recreational trail. And in June 2018, the town secured a $2.25 million federal Abandoned Mine Land Pilot grant to begin construction of the Clear Fork Rail Trail.

“Progress, combining thousands of volunteer hours, public support, new private investments and ranging attitudes of optimism and grit prove Whitesville is still turning,” reads a blog post on The Hub’s website. “Though premature to claim the town is turned around, Whitesville is now a visibly different place turning firmly toward the future.” 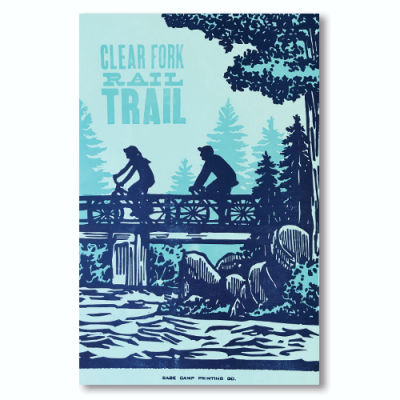 To help promote the trail, Whitesville resident Adam Pauley collaborated with Base Camp Printing in Charleston, W.Va., to create unique posters that were sold to help raise money for future projects in Whitesville.

Other participating West Virginia localities include Ripley, Grafton and Matewan.

“We’re really focused on showing that there’s a lot of activity happening around the state even though that’s not what always gets captured in the news about our state,” says Tyree. “There’s a lot of innovative local leadership that is trying to think big about how to redevelop small economies that don’t have the support of a major metropolitan area.”

Tyree states that while a lack of large investments makes the work challenging, local leaders find creative ways to work with what they have.

“Communities in our network do really innovative, challenging work on shoestring budgets,” Tyree says. “We’re having to do this all through volunteer labor where people are doing that in addition to their one or two or sometimes more jobs in addition to taking care of their families.”

Since 2015, the U.S. Appalachian Regional Commission’s POWER Initiative has invested $144.8 million in hundreds of counties affected by coal’s downfall. The ARC estimates that these investments have created or retained more than 17,000 jobs, created or improved more than 7,200 businesses and brought approximately $771.3 million in private dollars into Appalachia’s economy.

“The communities are identifying potential economic opportunities and then putting together project proposals, initiatives, activities, investments, blueprints, strategies,” says ARC Communications Director Wendy Wasserman. “Congress has said, ‘Hey, we have to pay attention to Appalachia’s coal communities as the country goes through this change in energy production.’” 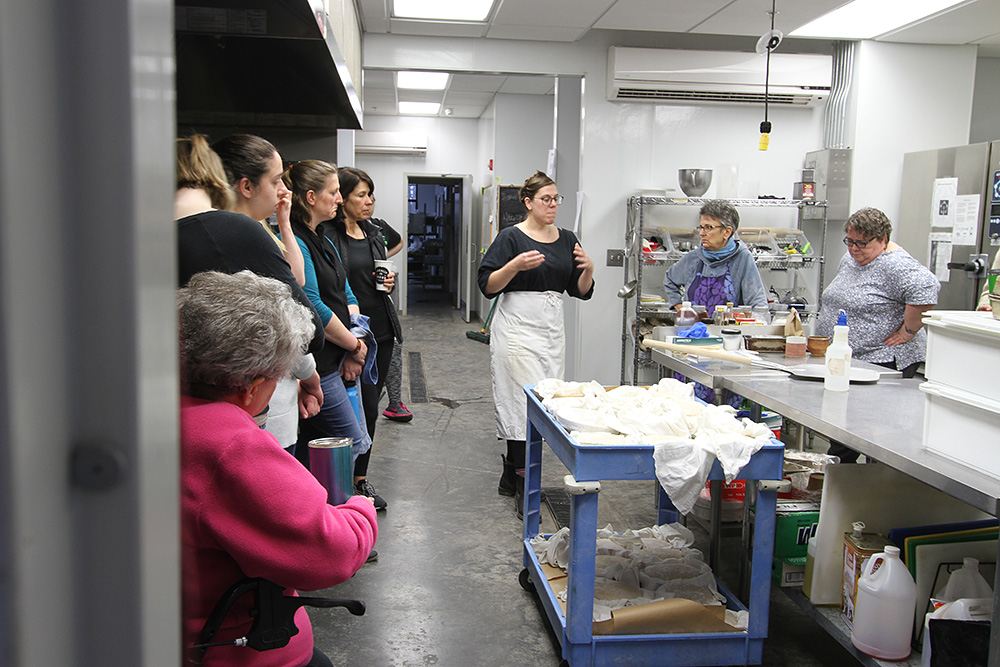 Whitesburg, Ky., resident Tara Jensen, one of MACED’s clients, runs a mobile workshop where she teaches baking techniques to audiences like this one at Berea College Farm Store. Photo courtesy of MACED

One thing that people have to be careful of, she states, is the idea that Appalachia’s economic problems can be solved by a single solution.

“I think that there is a natural tendency for people to look for a silver bullet,” Binko says. “I think the key is to not look to any single one industry or sector, but to invest in a variety of approaches.”

Industrial hemp could serve as a major cash crop for farmers in the coming years after its legalization under the 2018 Farm Bill. Peter Hille states that it could take the place of tobacco, historically an Appalachian cash crop.

“With the tobacco market changing the way it has, there hasn’t been that same kind of ready market for something that small producers could grow and add cash income to the other food crops that they might produce,” says Hille. 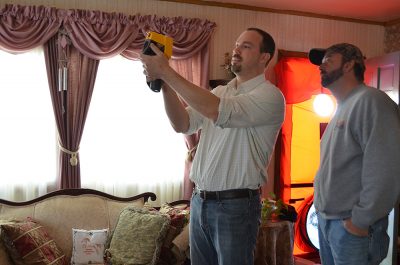 One industry that MACED and others across the region are investing in is retrofitting homes and businesses like Isom IGA to be more energy efficient. These projects help to plug economic leaks in small communities by decreasing bills that often go to monopoly utilities based in large cities.

Plus, the jobs would have to be local. “You can’t ship these buildings off to be retrofitted,” says Hille.

While circulating money within the community through local jobs like these is important, improving the economy also requires bringing in outside investments. Virginia is attempting to do this through the Virginia Initiative for Growth and Opportunity In Each Region, established in 2016. Called GO Virginia for short, it is a statewide collaborative effort between leaders in government, education and the private sector to attract outside investors to the state and create jobs.

The Southwest Virginia region of GO Virginia is led by UVA-Wise. To Shannon Blevins, associate vice chancellor of the university’s Office of Economic Development & Engagement, fixing the region’s economy is personal.

“Part of what drives me is being from this area and seeing friends and family that have been impacted by the declining energy industry,” Blevins says.

“We are the only public four-year institution in the [Virginia] coalfield region,” she continues. “As we continue to grow, we want to have good places, good jobs for our students when they graduate. Whether they go on to go directly into the work world or they go on to further their education, the same thing holds true: you want to have a diversified industry base so that they want to come back.”

In August 2018, the GO Virginia state board awarded a $27,547 grant to the Southwest Virginia Technology Council for initial work on a regional online jobs platform. The platform would connect job-seekers to technology industry employers. The City of Norton, the Town of St. Paul and Buchanan County are participating in the project.

According to Blevins, there has never been a better time to invest in Appalachia — and especially Southwest Virginia.

“We’ve got some things that people from outside this region want,” she says. “They just don’t know it yet.”

According to the SWCC website,” the programs are a unique blend of entrepreneurship, tourism and recreation,” that will help to stimulate economic development.

The program connects students with possible employers and provides state parks, outfitters and other outdoor markets with a stream of qualified professionals entering the workforce. According to a 2018 report from the Outdoor Industry Association, the outdoor industry in Virginia generates more than $21 million in consumer spending.

“Some careers, students will look for the biggest money but just don’t get outside because of it,” SWCC Associate Professor Michael Brown says. “A program like this is a life changing event for students. You might not be making the big bucks, but your quality of life will be a lot better.” — By Lorelei Goff

CORRECTION: April 29, 2019
A previous version of this article incorrectly stated that the pictured Isom IGA grocery store was in Letcher County, Ky. The store is in Salyersville, Ky.