Response to Spill Leads to Action Against Coal Polluter 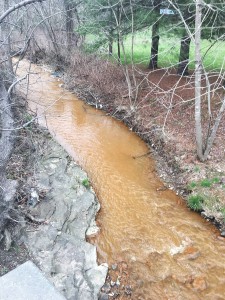 Acid mine drainage from a coal mine flooded into Pine Creek in eastern Kentucky, killing wildlife and raising concerns over drinking water safety. Photo by Tarence Ray

Pine Creek in Letcher County, Ky., is a small creek that flows through a hollow off Pine Mountain and into the North Fork of the Kentucky River. The point where Pine Creek and the Kentucky River meet is about five miles upstream of the municipal drinking water intake that serves Whitesburg, Ky., and the surrounding county.

When an auger mine operator drilled into an old underground mine at the head of Pine Creek on March 18, releasing a flood of acidic, orange-colored water into the creek, residents were concerned about the proximity of Pine Creek to the water intake. Our Appalachian Water Watch team was contacted by some of these concerned citizens, and was able to document the spill as it occurred in real-time. Photos of dead fish and turtles were posted to Facebook and Twitter, where they quickly went viral.

Due to public pressure from social media and citizens filing complaints, the state of Kentucky acted to control the spill, and filed three violations against the company, Hardshell Tipples. The state initially denied that the mine waste killed any wildlife, but eventually reversed its findings and issued an additional violation to the company. The state also compelled the company to commit to a fish-restocking plan for Pine Creek — a huge victory for water advocates and a sign that the state is aware of the public’s concern.

While water and fish tissue samples are still being processed, the quick response of our team pushed the state to action and prevented the mine waste from affecting the county’s municipal water system. Unfortunately, this is yet another example of the costs that communities near coal mines have to pay in terms of ecological, personal and financial health.

Read more about what happened on Pine Creek on our Front Porch Blog.