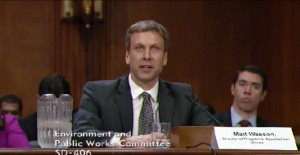 Armed with a wealth of science and quotes from residents directly impacted by mountaintop removal coal mining, our Director of Programs Matt Wasson defended the proposed Stream Protection Rule during a U.S. Senate committee hearing in early February.

The hearing, held by the Senate Committee on Environment & Public Works, was supposed to be about the relationship between the Stream Protection Rule, intended to protect waterways from surface mining pollution and other environmental laws. But it devolved into ad hominem attacks by majority members on the rulemaking process and the director of the Office of Surface Mining Reclamation and Enforcement, Joseph Pizarchik.

Fortunately, Matt brought a much-needed local perspective to the hearing by sharing the personal experiences of people living near mountaintop removal mines in Appalachia — and supporting those narratives with the growing body of science surrounding the practice’s devastating health and environmental impacts.

Matt began by telling committee members, including Sen. Shelley Moore Capito of West Virginia, that any discussion of the Stream Protection Rule must start with the basic fact that existing rules are not working, and, in fact, have “never worked to protect the health of streams, communities and wildlife in Central Appalachia.”