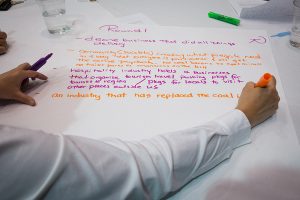 Forum participants broke into small groups to discuss what kinds of economic growth they envision for their community. Photo by Alistair Burke

Last July, in far southwest Virginia, Wise County made national news when it hosted the first federally approved commercial drone delivery in the United States. The scene was a rural medical clinic tucked deep among the Appalachian mountains, and the package delivered by the small buzzing aircraft contained much-needed supplies.

“They were calling it our Kitty Hawk moment,” says Andrianah Kilgore, a Wise County native who was involved in the project and whose excitement for the possibilities it signified for the future of her community hasn’t waned since.

“Despite some misconceptions from the rest of the world, this area could really be a leader in technology,” she says.

Kilgore, 25, was among more than 130 people who attended one of eight community forums in September called “Southwest Virginia’s New Economy Forums.” The forums, hosted by Appalachian Voices, which publishes this newspaper, and Virginia Organizing, provided a place for ordinary citizens from across southwest Virginia to share their ideas and vision for stabilizing and growing the region’s economy. The area has been pummeled in recent years by layoffs and business closings as the coal industry continues to decline.

“The coal industry, like it or dislike it, has to, or will be, slowing down. It’s an exhaustive resource at the end of the day,” says Zafar Kahn, who also attended the community forum in Wise.

More than 60 percent of central Appalachian coal-producing counties are currently classified as “economically distressed” by the Appalachian Regional Commission. Those counties saw population declines of 9 percent between 1980 and 2010, compared to a 36 percent increase nationwide, and these days, the average per-capita income is just 59 percent of the national average.

Kahn, an associate professor of economics at the University of Virginia at Wise, has an academic interest in the region’s challenges, but also a personal stake in the community where he has lived for the past nine years.

“I’m very concerned about the economic development of the local area,” he says. “You can’t be just dependent on that one industry. So you must diversify.”

The coalfields of Virginia, and across central Appalachia, have hit hard times before, each resulting in efforts to bring in more industry and business. The pervasive belief, however, was that the coal industry would always be there, so those efforts never truly pulled the local communities out from under dominance of coal, says Adam Wells, a fifth generation Wise County resident and the economic diversification campaign coordinator for Appalachian Voices.

This time, though, it’s different.

“We’re in a watershed moment, a tipping point,” Wells says. “There have never been as many people working in a coordinated way on economic diversification, or even using that term, ‘diversification.’ There’s a collective understanding that coal is on its way out, for real this time.”

Over the last several months, a groundswell of support has been spreading across central Appalachia for the “POWER+ Plan,” announced in February as part of President Obama’s 2016 proposed budget. The Partnerships for Opportunity and Workforce and Economic Revitalization plan calls for billions in federal funding to help coal­-impacted areas nationwide, including Central Appalachia. 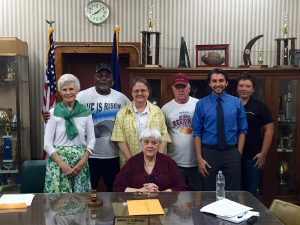 Local residents and members of Kentuckians For The Commonwealth stand with the Benham City Council in eastern Kentucky after a unanimous vote to pass a resolution supporting the Power-Plus Plan in August. Photo courtesy Appalachian Citizens’ Law Center

As of press time in late November, 24 local government entities in the coalfields of Virginia, West Virginia, Kentucky and Tennessee have passed resolutions supporting the plan, or generally supporting federal action to aid the region. All but one have passed unanimously.

The POWER+ Plan would advance a new way of thinking about abandoned coal mines, which continue to pose a safety and health threat and pollute local waterways. In Virginia, West Virginia, Kentucky and Tennessee, it would deliver $340 million over five years to clean up sites that have potential for long-lasting economic activity, such as developing a solar installation or mountain bike park.

“In the past, federal funds were used just to clean up the worst messes, but this funding would be specifically for economic development,” Wells says.

The region would also get some portion of $153 million to support worker retraining, tourism, agriculture, energy efficiency and other economic development initiatives. The plan would also refurbish the United Mine Workers’ health and pension funds, which distribute $570 million annually to the four states.

“Appalachia is the next great investment opportunity in America,” says Earl Gohl, the commission’s federal co-chair. For decades, “people have spent their lives underground, in the dark, making a living. There’s no doubt in my mind those skills they had to use to support their families and develop communities are the same skills that are critical and important now.”

To nurture this survival instinct, the region needs help establishing what he calls an “entrepreneurial ecosystem” that includes capital funding, broadband internet and technical support for marketing and export.

The POWER+ Plan would be a strong step in that direction, and Gohl commends the local governments that support it. “From the commission’s point of view, we are very excited to work with them, and hopeful to how far we can move the needle,” he says.

The resolutions show the growing consensus among citizens and local leaders around the dire need for economic diversification in the coalfields. But for POWER+ to work, Congress must approve the funding, and so far, there hasn’t been strong public leadership from congressional representatives to usher the bill through the legislative process.

Simultaneous with proposing POWER+, President Obama announced a “down payment” on the plan of $14.5 million in existing funding for coal communities this year — no congressional approval needed. As of October, that money is on the ground in 12 coal states and tribal territories.

Awarded through four federal agencies, the funds are fueling a wide variety of projects, including retraining former coal-plant workers from Washington state and the Navajo Nation, developing a strategic business plan in southern Pennsylvania, diversifying the coal region of the San Juan Basin in the desert southwest and many others.

Central Appalachia by far received most of the funding, including:
• More than $3 million to expand broadband internet in Kentucky;
• $826,400 to extend water to an industry near Union, W.Va.;
• Almost $550,000 for a local food supply project in Elizabethtown, Ky.;
• $1.2 million for a substance abuse treatment program in Ashcamp, Ky., a coalfield community struggling with rampant drug use; and
• $350,000 to support efforts in southwest Virginia to develop outdoor recreation and tourism, and provide training for entrepreneurs.

While Congress squabbles and coal companies seek to shelter their profits in bankruptcy courts, the people of Central Appalachia are not standing idly by. Over the last decade in particular, dozens of public and private initiatives and enterprises have taken root to grow the regional economy.

There are the big-vision projects. In southwest Virginia, the idea for a tourist-oriented, auto-centric “museum” showcasing the area’s musical heritage emerged in 2003. Today, the Crooked Road is a 330-mile route that includes 19 counties and more than 55 towns and cities and has been written up in the New York Times and Lonely Planet. The total economic impact as a result of the Crooked Road was estimated to be almost $23 million for 2008 (the most recent data available), with 445 full-time equivalent jobs. 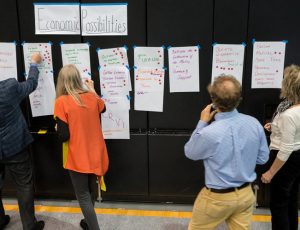 Common themes that emerged from all eight forums were supporting advanced manufacturing and ecotourism, enhancing relationships between local colleges and the community, expanding broadband infrastructure, and ensuring that younger people have a voice in helping shape the region’s future. Photo by Alistair Burke

There are the small business start-ups. In Pikeville, Ky., Bit Source trains laid-off coal miners and other industry workers in software coding and pairs them with markets well beyond the city limits. Its website proclaims: “The business concept and plan is to transition a workforce from one that exported coal from the region to one that exports CODE (#exportCode).” Started in October 2014, Bit Source received 900 applications in its first month and now employs 13 local people, most of whom were coal industry workers themselves. Its success drew U.S. Labor Secretary Thomas Perez for a visit in early 2015.

And then there are the local public projects. In Norton, Va., Shayne Fields has been working for the city for several years to design and build a top-notch mountain biking trail system on nearby High Knob Mountain. The way he sees it, there’s a double advantage in developing outdoor recreation facilities — attracting more affluent visitors to frequent restaurants, hotels and shops, and enticing local folks outdoors.

“Like many other depressed areas, you don’t see a lot of people here who are very active. You need to try to get people off the couch, outside and engaged in anything,” Fields says. “The tech industry won’t come unless they have a happy, educated work force and they get happy by doing the outside things.”

So, what will pull the region through in the years ahead? Gohl, with the Appalachian Regional Commission, says it comes down to the endemic sense of independence and a strong attachment to community. “In Appalachia, it’s hard to find someone who’s not running a business out of the back of a truck,” he says. “They don’t see themselves as entrepreneurs, but they are.”

Andrianah Kilgore, the young woman at the Wise community forum, embodies that attachment. She was born and raised here, her parents, too, and she doesn’t see herself living anywhere else. Not if she can help it.

“I feel a very huge sense of, I guess, debt to my community,” she says. “They gave a lot to me growing up. I absolutely feel like I should be a driving force, and hopefully bring the group of peers that I have along with me, to help the community continue to be successful.”