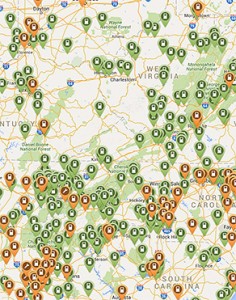 This map shows public (green) and high-power (tan) charging stations in the area. Image from plugshare.com

While the electricity grid that powers much of the 21st century continues to benefit from the adoption of renewable energy sources like solar, wind and geothermal, vehicles powered by gasoline and diesel have lagged behind. But here’s some good news: the coming partnership of renewable energy — especially solar — and tailpipe-free electric vehicles can change that for the better! Here’s how:

The U.S. Department of Energy currently states that fueling electric vehicles costs the equivalent of $1.22 per gallon of gasoline versus $2.78 for the average American gasoline-powered car. The equivalent “per gallon of gasoline” price to fuel an electric vehicle can drop to $0.61 for families charging their electric vehicles with solar electricity generated by panels on their home that were purchased with state and federal tax credits. The fuel price can plunge even lower for businesses that additionally depreciate or ”write-off” these panels.

It is difficult, or perhaps impossible, for citizens and businesses to construct and operate their own gasoline or diesel fuel production facility — not to mention acquiring the unrefined petroleum or vegetable oil to produce the fuel. For electric vehicle owners that own or have access to solar panels at their homes or workplace, creating automobile fuel is as easy as plugging in a lamp, hair dryer or smartphone.

TRANSPORTATION FUEL “MADE CLEAN IN THE USA”:

The U.S. Energy Information Administration forecasts that the United States will import 21 percent or more of its oil in 2015 — the country imported 27 percent of its oil in 2014. Not only do U.S. dollars leave local economies to buy this oil, domestically produced fuel demands a price both at the pump and in terms of human health and air, water and environmental degradation as a result of drilling, transport, refinement and waste products. Renewably powered electric vehicles don’t require these additional fuel costs — and national renewable energy sources don’t decrease with usage.