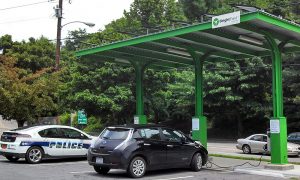 Brightfield Transportation Solutions, an Asheville, N.C.-based company, has harnessed the world’s largest and longest transportation fuel pipeline. This nearly 93-million-mile wireless pipeline wasn’t constructed by a large corporation, isn’t causing a political fist fight, never leaks toxic substances and powers every living thing in Appalachia. Now thanks to Brightfield TS — with a lot of help from nature — the sun can power your electric automobile too.

Racing on the Sun 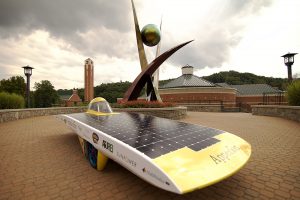 Students and faculty on the Solar Vehicle Team at Appalachian State University in Boone, N.C., have finished their construction of “Apperion,” a solar-powered racing vehicle.

The team has set their sights on the Formula Sun Grand Prix in July 2016. The race is a qualifying competition for the American Solar Challenge, a 1,200 to 1,800-mile race across North America. In October 2017 the team hopes to go to the World Solar Challenge in Australia to compete in the “cruiser class” race alongside cars designed for speeds up to 90 miles per hour.

The team is led by two faculty advisers working with 18 university undergraduate students from a diverse collection of disciplines. While winning races may be a goal for the solar vehicle team, their ultimate aspiration is to inspire people to live more sustainably and raise awareness of the impacts that individuals can make.
Learn more at appstatesvt.com
— By W. Spencer King

Reducing one’s carbon footprint is no easy feat, but the collective movement toward less environmentally harmful modes of transportation is growing, and growing with it is interest in creating more efficient electric car batteries.

The Kentucky-Argonne battery manufacturing center in Lexington, Ky., received a $120,000 grant from Ford in February 2014 for research and development on improved electric vehicle battery technology such as shorter production times, increased range and performance quality.

Researchers at North Carolina State University are developing technology to better estimate the amount of battery power a trip will use by analyzing the planned route a driver will take using GPS, and factoring in weather conditions and traffic patterns.

New technologies are also being developed to make recharging a battery more akin to refilling a conventional vehicle’s gas tank. A research team at the Illinois Institute of Technology is designing a battery that can be “refilled” in a matter of minutes, making long trips in electric vehicles more viable.
— By W. Spencer King