Schools Do the Math and Go Green 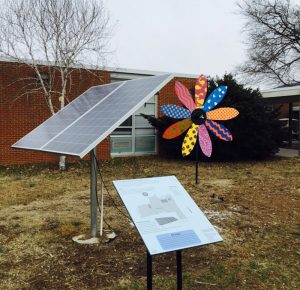 A growing number of schools across Appalachia are going green with renewable energy and energy efficiency programs. Though the common denominator in budget-challenged Appalachian schools is cutting energy costs, students benefit from applied learning opportunities and communities feel the positive impact of sustainable practices.

In Tennessee, Greene County Schools cut their energy costs by $1 million over the last two years with a combination of 50-kilowatt solar arrays, an energy efficiency plan, and updating aging equipment.

According to Greene County Schools’ Energy Specialist Steve Tipton, the solar arrays were installed at no cost to the school system through a partnership with private investors brokered by the Tennessee-based company Terra Shares. The Tennessee Valley Authority utility doesn’t allow the schools to directly use the solar energy they produce, however, so the solar arrays feed directly into the grid and the school system receives corresponding credits on their electric bills.

“We have two different programs here at the schools, and solar is actually a small part,” says Tipton. “We have an energy conservation program, where we try … to reduce consumption through behavior modification. That’s where most of our savings comes from.”

The behavior modification program includes turning off lights as soon as students leave the building for the day and controlling the temperature in classrooms. The school has also upgraded aging equipment, such as water heaters and air conditioning, to more efficient models.

Dr. Cindy Bowman, principal of South Greene High School, says that having the solar arrays on campus provides a good tool for teaching about green energy and sustainability.

“My teacher that teaches pre-engineering will use it some, and sometimes our science people will use it,” says Bowman, adding, “We talk here a lot about green energy.”

To the west, Campbell County, Tenn., installed 13 solar arrays in its school system by using a similar business model with funding from private investors, brokered by Efficient Energy of Tennessee.

But according to Holcomb,gradual changes in the TVA solar incentive program have placed limits on the amount of electricity that schools are allowed to produce and lowered the amount the utility pays for that electricity per kilowatt hour. Due to this, Efficient Energy can no longer attract solar investors to Tennessee to fund the school installations, and the program is at a standstill.

John Atkins of Terra Shares, the company that brokered Greene County’s program, says it’s unlikely that future solar projects of this type will be initiated in Tennessee schools under TVA’s current solar policies.

“I still have another dozen schools under contract [in] Greene County, but I cannot interest any investors to come to Tennessee,” says Atkins. “They can go to many, many other states, and invest the same money in exactly the same equipment and make a much higher return.”

In other parts of the region, state grants have helped Virginia schools to go green. Students in Albemarle County raised $40,000 toward solar panels in 2011, which helped the school district procure a number of state grants totalling over $212,000. Since the panels were installed, the school district has saved $25,000 on energy costs, using a combination of solar and wind power, lighting and equipment upgrades and improved building automation controls. Four of the schools in Albemarle also compost food waste from their cafeterias.

“Some of the teachers are using the systems in their lesson plans,” says Lindsay Check Snoddy, program manager for environment, energy and sustainability with Albemarle County Public Schools.

According to Snoddy, the educational opportunities of the solar system aren’t limited to science and math. An art class at Henley Middle School integrated demo solar panels with art to create and animate an outdoor art sculpture.

And in late May, the school system announced a partnership with Staunton, Va.-based solar company Secure Futures to install 3,000 solar panels on six schools, which will generate 1.3 million kilowatt-hours per year. The contract is the first between a third-party energy company and a school district in Virginia.

Elsewhere in the Tarheel State, NC Green Power, a nonprofit based in Raleigh, is offering schools across North Carolina an opportunity to apply for matching grants to fund small-scale solar photovoltaic systems.

Though green practices add up to savings on energy costs and more educational opportunities for Appalachia’s schools, varying regulations and funding means that all school systems aren’t on equal footing. For some, going green may require innovative funding that includes a variety of public and private sources.