Kids in Parks Reconnects Families with the Outdoors 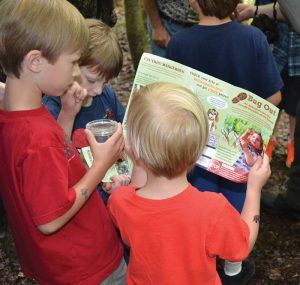 Basic ecological literacy is waning among children. A 2008 study by BBC Wildlife Magazine indicates that most children cannot identify common plants and animals, and an earlier study concluded that children know more about Pokemon than they do about wildlife.

Even the language used to describe nature is falling out of favor. The latest edition of the Oxford Junior Dictionary has cut words like pasture, otter and willow in favor of more “modern” terms such as broadband and MP3 player.

In Appalachia, trail-based education initiatives like Kids in Parks’ TRACK Trails program are re-introducing children to the natural world through self-guided hiking adventures.

Between 2007 and 2008, the Blue Ridge Parkway Foundation found that less than 11 percent of visitors brought young children to the parkway, according to Kids in Parks Director Jason Urroz. Around this time, Richard Louv’s “Last Child in the Woods” was widely circulating. The book connects lack of outdoor play to numerous health and behavioral problems in children. Among its readers was Dr. Olson Huff, a renowned pediatrician who, through a collaboration between the Blue Cross Blue Shield Foundation of North Carolina and the National Park Service, helped create the TRACK Trails program. Eight states now host TRACK Trails, including Virginia, West Virginia and North Carolina.

TRACK brochures can be downloaded online and include a variety of on-trail activities such as Nature’s Hide and Seek, which lists local flora and fauna for children to look for on a hike. The self-guided activities allow kids to go at their own pace, while their parents can step in as educators, sharing meaningful moments while teaching their children the differences between red and white oaks or pointing out the cardinal or bluebird that would otherwise go unnoticed.

According to Urroz, it is critical that children be given the opportunity to find inspiration in the outdoors. “If we don’t get kids and families today outdoors,” he says, “then who’s going to be our future stewards?”