Advancing Quality of Life for Patients with Black Lung 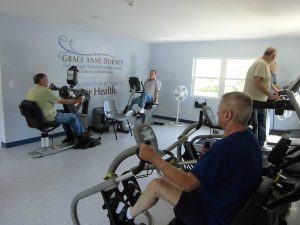 The most severe form of black lung disease, known as progressive massive fibrosis, is at its highest levels since the early 1970s, despite being nearly eliminated 15 years ago, according to a 2014 analysis by the National Institute for Occupational Safety and Health, part of the U.S. Centers for Disease Control and Prevention.

This debilitating lung disease is caused by exposure to coal mine dust. Across the country, clinics funded by the federal Black Lung/Coal Miner Clinics Program provide early diagnosis and assist with the process of filing claims for federal black lung benefits, along with helping patients learn to cope with the incurable disease.

In southern West Virginia, Valley Health Black Lung Program Coordinator Deborah Wills is on the front lines, helping current and former coal miners file for federal benefits and trying to connect miners in need of legal representation with the few lawyers available. Witnessing the increase in severe black lung is discouraging, Willis says, but she points to a bright spot — three rural pulmonary rehabilitation centers opened in the area in September 2014, and another is slated to open in Lincoln County in September 2015.

Rehabilitation for pulmonary patients includes exercises that help patients of all abilities regain their strength. One participant told a local television station that he was able to mow the lawn again after doing the exercises, and wheelchair-bound participants have experienced improvements such as being able to get in and out of bed more easily.

The program provides information about the disease, how to use medications, and, Wills says, “understanding what’s normal and what’s an emergency.”

Often, she says, patients will panic when they can’t catch their breath, which can worsen the situation and send them to the emergency room. The program teaches participants when to use breathing exercises or a rescue inhaler to quell these episodes. “[Rehab] often prevents ER visits because miners can handle what’s going on with their breathing themselves,” Wills says.

Dr. Cecile Rose, an associate professor at the Colorado School of Public Health, says that there are ways people diagnosed with black lung can improve their well-being. “For people that have a chronic lung disease, we know that maintaining activity levels, having a regular program of exercise for muscle strengthening and for weight control improve … quality of life,” she says. According to Rose, medical care such as regular flu vaccinations, quitting smoking and treating other conditions that can be exacerbated by black lung, such as sleep apnea, can also help.

But, she adds, “medical care by its very nature focuses on the patient and not on the workplace, and the real focus for prevention of pneumoconiosis, of occupational dust disease, has to be on the workplace.”

In August 2014, the Mine Safety and Health Administration published a new coal dust rule that lowers miners’ allowable exposure to coal dust at underground and surface mines. And in April of this year the Labor Department proposed the Black Lung Benefits Act Rule. The draft regulation would require that doctors and lawyers representing both the miner and the coal company disclose all medical records associated with a claim, and make it more difficult for coal companies to avoid paying benefits after a claim is awarded.