An Idea About What Is Possible

A brick house off Hwy. 58 just west of Damascus, Va., stands out in a curious way. Flowerbeds have replaced the blacktop driveway and small fruit trees dot the front yard. To the side, on top of a large shed, sit four blue barrels spray-painted with the letters L-O-V-E — a message easily seen from the busy road. 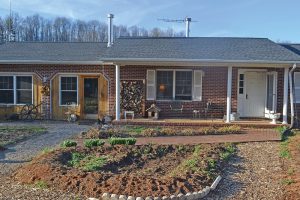 “Our goal this year is less grass,” says Jonathan Towers. He already grows enough food to donate surplus to neighbors or a family in need.

Rarely does Jonathan Towers advertise his home as the South Fork Sharestead, although the name accurately describes his one and a half acres. “It was basically created to share with both the people who are here and the community,” says Towers. He and his wife Carol, both in their 60s, converted his two-car garage into a living space for themselves. The sharesteaders — up to four at a time — live in the house. Most of them are from the surrounding area and are at least a generation younger than the couple.

Courtney Rowle, 26, moved in 18 months ago after meeting the Towers at a restaurant where she worked in Damascus. The sharestead is the longest she has lived anywhere since leaving the Marine Corps. “I call this the refuge,” says Rowle. While exemplifying intergenerational living, those at the sharestead strive for resource conservation and a low-impact lifestyle. 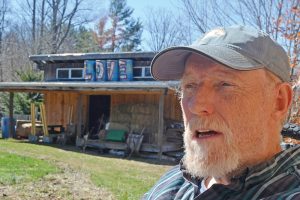 He says his endeavors are a fearless preparation for an uncertain future affected by climate change. He hopes when people drive by and see the LOVE barrels, in the background at right, they will be reminded of the primary driver of his actions. Photos by Eliza Laubach.

In the six years since he moved from Boone, N.C., Towers has transformed his average American home into an energy-efficient, food-abundant powerhouse. By retrofitting the house to be energy efficient and maintaining a strong commitment to energy conservation, their utility bill has dropped 75 percent. The Towers started with little things, such as line-drying clothes. Soon their next-door neighbors had a line out, too. “We realized it could be a demonstration house,” says Jonathan.

The couple models sustainable living on a budget. A wood stove, along with extra insulation in the attic and curtains made out of sleeping bags, replaced the central heating and air conditioning system. A water tank on the back of the woodstove and a solar shower have greatly reduced the use of their hot water heater, which, like the windows, is covered in a down Army-surplus sleeping bag.

Towers allows function to determine placement. He found that a chest freezer operating on a warmer setting uses a lot less energy than a refrigerator. To move hot air without a central heating system, he installed fans into the walls above many doors in the house.

Garden beds in his front yard follow pathway borders, and in the backyard are two round gardens that host intensive, small-scale vegetable cultivation. Towers devised these gardens as a system the average person, of any age, could easily tend. Their accessible shape allows a gardener to easily grow an abundance of food in a compact space, he says. Fencing encircles each plot and a drainage pipe snakes underground, emerging outside the fence, to be supplied with rainwater reserved from his roof. He remembers harvesting more than 500 pounds of tomatoes from the two 220-square-foot spaces one year.

A barn housing two horses and 11 chickens features a greenhouse on the south side. A passive solar design lights and ventilates the barn, a system that Towers also applied to his basement to make it comfortable without a dehumidifier.

“If there is something here that somebody is interested in doing, we do it,” says Towers. “We’ve let everything evolve here rather than coming in thinking we know everything.” He doesn’t invite people to live at the sharestead to learn from him and Carol, but to learn with them.

The Towers have espoused this belief since they first moved to Damascus with their friends, Steve and Ashley Ahn. Steve describes his family as quite typical before they met the Towers, but they wanted to do something different. The Ahns and their three young children moved into the brick house with the Towers in an exploration of extended-family living.

Eventually, the Ahns bought their own house nearby and cultivate a homestead there, and the two families have grown even closer. The Towers help the Ahns build on land in the backcountry of Grayson County, a purchase the Towers also helped finance. “They are like our adopted parents,” says Steve.

Jonathan’s mantra, “that we each need to take personal responsibility for our wellbeing,” empowers the sharesteaders’ reasoning. He thinks in terms of perpetual inner growth, a philosophy he and Carol promote among other residents in the home.

Rowle takes this seriously, as her educational experience at the sharestead is enriched by an apprenticeship with a local Native American medicine woman. She credits the grounding support she finds with Jonathan and Carol as an incubator for her projects. “When you have to share with other people you start to grow,” she says. “You start thinking about the other person, kind of like a family.”