In late March the sunlight falls in tepid, dappled patterns through the canopy of branches to the forest floor in Walker Valley, Tenn., home to the Great Smoky Mountains Institute at Tremont. Red maple leaves burst from swollen buds and bird-foot violets unfurl diminutive petals. A familiar melody warbles through the air. The black-throated green warbler darts from tree to tree. His yellow face scans the forest from beneath an olive crown, a bib of black outlining his white belly. 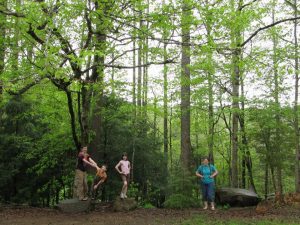 Once welcomed as a sign of the forest’s constant seasonal cycles, the male warbler arrives in Walker Valley more than two weeks earlier than he did 20 years ago. That has Tiffany Beachy, Tremont’s citizen science coordinator, wondering if the warbler’s song is an ode to climate change.

Scientists at Tremont are using phenology — the recurring plant and animal life cycles of species in a particular region — to monitor changes such as the warbler’s early arrival. Observations recorded by citizens over the past 30 years can be used to determine if the changes are related to climate change.

Karen Metcalf and her children have watched the changes in Walker Valley for more than five years as citizen science volunteers. Daniel, 10, Hannah, 14, and Sarah, 18, record observations about trees, plants and birds, and take part in bird banding and butterfly tagging as part of their homeschool education.

“I think my kids are more aware if they spend time actually being part of the scientific process,” says Metcalf.

“It’s neat to know that what I’m doing will go into that bigger research,” says daughter Hannah. “It’ll be cool to see, when people gather it and study it, how it all comes together.” 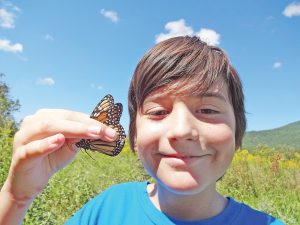 Frank Whetstone and his mother Stacey help catch and tag Monarch butterflies during their fall migration. They also participate in vegetation analysis and pond-breeding amphibian monitoring at the Great Smoky Mountains Institute at Tremont. Photo by Tiffany Beachy.

Mac Post is a retired Oak Ridge National Laboratories environmental scientist. He used observations from citizen scientists to look at growing seasons for climate modeling while at Oak Ridge. He now monitors phenology plots and trains other citizen scientists at Tremont.

He says the value of citizen science goes beyond the information gathered.

Beachy says citizen science has been around for several hundred years. She attributes its recent growth, in part, to the scope of the climate change problem and the need for large amounts of data.

According to Beachy, citizen scientists form the backbone of Tremont’s research, including a phenology project started in 2010. The project monitors eight plots of land dispersed throughout different forest types and elevations within walking distance of the campus. Citizen scientist volunteers visit the plots each week and record the seasonal changes of various species. Researchers are especially interested to see if the migratory arrival of birds changes over time in conjunction with the changes in the leaf-out of the trees and the availability of food resources.

“It’s very specific and detailed, so we get a very good picture, a snapshot, of what’s going on in the forest at that moment,” Beachy says.

“It’s hard to say that what we’re seeing so far is directly related to climate change, because we’ve seen it for a short period of time,” she adds. “But what I do notice, what I’ve seen in just the last few years, is lots of extremes.”

Beachy says the Tremont institute is working with research partners to analyze the accumulated data in the future as part of long-term climate change research.

The volunteers have contributed more than 2,000 hours to gathering data — an amount that would be impossible without citizen scientists.

The Highlands Biological Station in Highlands, N.C., found a different way to approach plot-based monitoring. The station hosts a planned garden of native plants and is the model for a network of similar gardens in the region that will allow scientists to compare data on the same species in different areas. Volunteers can record observations by visiting the Phenology Garden in person, or by visiting the website at highlandsbiological.org/phenology-garden and using the “Phenocam” webcam.

The Appalachian Trail MEGA-Transect phenology project monitors changes on a much larger scale. Volunteers collect information along the trail, from Georgia to Maine. Laura Belleville, Conservation Director at the Appalachian Trail Conservancy, says the project began in earnest two and a half years ago.

“Our data is collected by trained volunteers — we’re always looking for new volunteers — at identified sites, to monitor specific species,” Belleville says. “That then can be rolled up to look at long-term trends with regard to the timing of bud release or flowering along the Appalachian Trail corridor.”

The program is too young to reveal any concrete conclusions about climate change on the trail, but the data has provided indicators of environmental health along the trail and is shared with the National Phenological Network to monitor changes over the long term.

“It’s a great opportunity to get outside and participate in a very large-scale scientific research project, and help us collectively understand the potential impacts of climate change,” says Belleville.

Is Climate Change for the Birds?

The National Audubon Society’s Christmas bird count encompasses much of the North American continent and may be the longest-running phenology project to date. It began 115 years ago and boasts tens of thousands of volunteers who count the bird population across the nation during a three-week period in December and January.

“The data that’s been collected over the century-plus gives us a good snapshot of the current bird distribution and how it’s changed,” says Curtis Smalling, director of Land Bird Conservation for Audubon North Carolina.

A landmark report based on volunteer-collected data and published by Audubon in 2009 shows that about a third of the bird species had shifted measurably north during that time.

The data was also used to publish another study in September 2014, “Birds and Climate Change,” that predicts what could happen over the next 80 years.

“The take-home message from the climate report is half the birds that breed in the U.S. are at risk from climate change,” Smalling says.

“Will they adapt? Will some species go extinct? We just don’t know. They’ve never had to adapt at this speed. And really, that makes the citizen science that informed those original reports that much more important,” he says.

Data is a problem, according to Dr. Walter Smith, assistant professor at the University of Virginia at Wise, home to the student-led Southwest Virginia Citizen Science Initiative.

“We really don’t have a good handle on where certain species even live in the area, because some areas have been so heavily under-sampled,” Smith says. “And so for us, citizen science was a way to address that.” 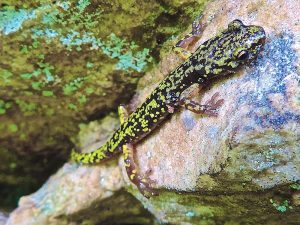 Citizen observations from the Norton, Va., area led researchers to discover a previously-unknown and unusually abundant population of the secretive green salamander species. Information gleaned from studies at this site has led to more than 35 new populations of the species being discovered across southwest Virginia, as well as new insight into possible conservation threats facing the species. Photo by Walter Smith.

The Southwest Virginia initiative is a partnership between UVA and iNaturalist, an online biodiversity social network collecting data for scientific research. Smith says the iNaturalist partnership allows citizen scientists to gather data on a larger scale than the scientific community can cover, or from private property that is inaccessible to scientists.

“When they see wildlife either on their property or hiking, they take a photograph of it,” he says. “That becomes an observation that’s uploaded to iNaturalist that can actually be used by scientists as data on biodiversity.”

Smith counts the two year old project a success, with nearly 4,000 individual wildlife observations by close to 300 volunteers capturing nearly 700 different species across the region. The information goes into a repository called the Global Biodiversity Information Facility and is accessible to anyone around the globe.

He hopes citizen science will inform experts and the public about how the planet is changing and how best to respond to it.

The Audubon Society’s Curtis Smalling agrees. “For us, the whole climate debate is about getting good information, more than politicizing it,” he says. “We really need good data.”

Citizen science is a rapidly growing movement of people participating in research across many disciplines. Volunteers contribute their time and observation skills, while doing things they love, to help build databases scientists use to conduct their research. Citizen science is a potent tool that has a real impact on how the public understands science, from climate change to astronomy to medicine.
Check out these links to help monitor climate change: