A Better Path than the Coalfields Expressway for Virginia 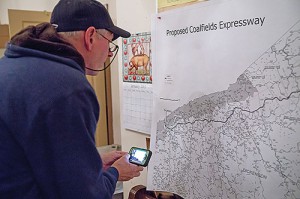 A resident looks at a map of the proposed Coalfields Expressway during a community forum. Photo by Alistair Burke, alistairburkephotography.com

More than 50 local residents recently attended three community forums in southwest Virginia to express their views on ways to improve transportation in the area. Feedback included improvements that would benefit residents and better protect the environment than the ill-conceived Coalfields Expressway. As proposed, the Coalfields Expressway includes significant mountaintop removal coal mining that would bring more environmental devastation to the region, and the suggested route would also draw economic activity away from existing town centers.

Local citizens have begun to compile these ideas so that they can be shared with the Commonwealth Transportation Board and Virginia Department of Transportation. Citizen proposals include upgrading existing road infrastructure, improving traffic patterns in Pound and Clintwood, and providing better access to parks and recreation areas by paving roads and enhancing signage. Residents also suggested increasing funding for public transportation services in the area, including transportation options for senior citizens, and programs like the Spearhead Trails system, which brings tourism to the area.