My pulse thumps and I breathe harder. At a furious pace, I forge uphill quicker than the river beside me rolls down the mountainside. Grasses reclaiming the path swipe my ankles. Insects buzz near my open ears, which strain to hear the slightest sound — a crack in the trees or a rattle in the dirt. I’m alone and out of my element, but with each foot forward, concerns fade.

On this particular day, I’m tromping along the Brookshire Creek Trail, a 6.7-mile stretch in the Cherokee National Forest’s Upper Bald River Wilderness Study Area. Although the Upper Bald site hasn’t yet received wilderness designation, it certainly feels wild. My three stops to ask for directions and the five miles of winding, up-and-down dirt road to an unmarked trailhead located in the “east corner of the parking area” can attest to that. Or maybe I’m just in need of a lesson in confident map-reading. 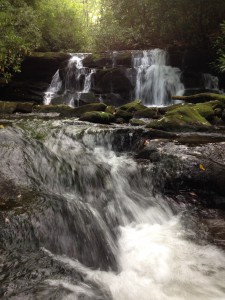 The Bald River pours over an unnamed waterfall that shelters a shallow swimming hole in the Upper Bald Wilderness Study Area. The Upper Bald is one of six areas included in the Tennessee Wilderness Act, which would designate more wilderness in the Cherokee National Forest. Photo by Chris Samoray.

Either way, I’m drawn to the Upper Bald by nature’s lure. And it’s this attraction that has hooked the Upper Bald as a candidate for official wilderness designation in the Tennessee Wilderness Act.

A Guide to the Wild

“A wilderness, in contrast with those areas where man and his own works dominate the landscape, is hereby recognized as an area where the earth and community of life are untrammeled by man, where man himself is a visitor who does not remain.”
– Wilderness Act of 1964

This year is the 50th anniversary of the Wilderness Act of 1964, and to date, the nation’s wilderness system includes 758 areas that cover nearly 110 million acres in all but six states. Wilderness areas are managed by the National Park Service, the U.S. Forest Service, the U.S. Fish and Wildlife Service and the Bureau of Land Management, and are designated within existing federal public land. While wilderness areas are similar to national parks and forests, in many ways, they’re governed with more regulations.

Activities such as logging, mining and livestock grazing are allowed in national forests but are strictly prohibited in wilderness areas. And unlike national parks, once an area receives wilderness designation, new roads generally can’t be built.

“Wilderness designation is the ultimate level of protection for an area,” says Laura Hodge, who works for wilderness organizations Tennessee Wild and Wild South.

This doesn’t mean that wilderness areas are less open to the public though. While the main goal of a designated wilderness area is to keep it wild, visitation is encouraged. Traditional forms of outdoor activity such as hiking, camping, horseback riding, hunting and fishing as well as other non-mechanized recreation, such as rafting and skiing, are all welcomed in wilderness areas.

“There are no areas that keep people out,” says Hodge. “This is public land. People are welcome everywhere.”

What’s forbidden in wilderness areas is machinery. Even using weed eaters and chainsaws to maintain trails is off-limits — crosscut saws and other hand tools are the preferred methods of trail maintenance.

Ultimately, wilderness areas aim to provide a safe haven free of alteration from human impact. Each chunk of land set aside helps preserve clean air and water and wildlife habitat and, in doing so, ensures that future generations will have the opportunity to explore pristine places like the Brookshire Creek Trail.

Although Brookshire is 6.7 miles one way, my hike stretches only five miles, both ways. I plan to turn around at a cascading unnamed waterfall along the Bald River, about 2.5 miles in.

Almost immediately after setting out on the trail, the path runs into a small stream that empties into the nearby Bald River. Opting not to sacrifice dry boots, I dance over a few stones to reach the other side just a few feet away.

From there, the narrow trail follows the tumbling Bald River up the mountainside, occasionally recruiting me for more small river crossings. The uphill trudge is slight, and a heavy canopy shades the path. But I’m following water, and water means insects. In August, bugs ruled supreme.

The Tennessee Wilderness Act, first introduced in 2010 by Sen. Lamar Alexander (R-Tenn.) and later co-sponsored by Sen. Bob Corker (R-Tenn.), would add nearly 20,000 acres of the Cherokee National Forest as official designated wilderness. With slightly more than 9,000 acres, the Upper Bald River Wilderness Study Area is the largest of the six tracts included in the proposal, and the only one that does not currently have any designated wilderness. 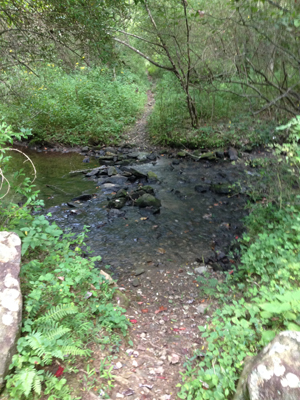 The Upper Bald is also adjacent to the Bald River Gorge Wilderness, and the two combined cover much of the Bald River Watershed. If passed, the Tennessee Wilderness Act would safeguard nearly the entire watershed, helping to protect four of the area’s threatened or endangered aquatic species, including the Citico darter and smoky madtom fish, as well as native brook trout. In the eastern United States, Hodge says, this extent of watershed protection is rare because of population density and land availability.

The bill would designate Tennessee’s first new wilderness in nearly 30 years, but the state’s three-decade lull hasn’t been for lack of trying.

In the past five years, the Tennessee Wilderness Act was introduced two other times, and despite a survey given by Tennessee Wild showing broad support, the bill was thwarted by an adjourning Congress on both occasions. Similar to previous introductions, the 2013 introduction awaits a floor vote.

In the meantime, people appear eager to satiate their outdoor appetite. According to the Outdoor Industry Association, Americans currently spend $646 billion on outdoor recreation annually, and the industry fuels 6.1 million American livelihoods. In Tennessee, outdoor recreation provides 83,000 jobs and generates $8.2 billion in consumer spending. In neighboring North Carolina, the numbers are more than double at 192,000 and $19.2 billion. Virginia, South Carolina and Georgia closely follow in North Carolina’s footsteps.

“Wilderness does not prevent jobs, it creates jobs, particularly in southern Appalachia,” Hodge says. “Think of the visitors who go to the Smokies. It shows the public has an interest. If we don’t protect these areas, they’ll be gone.”

Communities bordering proposed wilderness areas of the Tennessee Wilderness Act seem to support outdoor recreation, too. Tellico Plains, which is near the Upper Bald area in Tennessee, recently rebranded itself “The Little Town with the Big Back Yard,” and in August, the mountainside community earned “Trail Town” recognition from the Benton MacKaye Trail Association and the Southeastern Foot Trails Coalition.

Back on the Brookshire Trail, the charm of falling water scatters insects and breaks my daydream. Down a steep embankment to the left is the unnamed waterfall.

I scramble down a small water runoff path and lose the boots and socks. Stepping carefully to the river’s center, I aim to lounge on moss-covered rocks bathed in river mist and tree shadows for an afternoon picnic. A chilly plunge into the swimming hole at the base of the waterfall washes down my meal.

Just beyond the waterfall, the trail meets the lower waters of Brookshire Creek and then joins with the Benton MacKaye Trail, only deviating from MacKaye for a short distance when Brookshire goes up to its terminus at Beaverdam Bald, a small open area at 4,260 feet with mountainous views into North Carolina.

If the Tennessee Wilderness Act passes, the amount of wilderness in the Cherokee National Forest will increase from 66,000 acres to more than 80,000 acres, about 12 percent of the forest. But Hodge notes that this lingers below the national average of 14 percent. Still, the additional acreage would provide increased protection for wildlife in a region that’s among the country’s most biodiverse. And not only would nature reap the benefits, but so too would we.

Nature gives us a chance to revisit our roots, and by the time I begin my return trek, I feel rooted in the forest. I walk slowly, allowing the running water and fresh air to recharge my being for just a little longer. Without the aid of modern tools though, I’ve lost the ability to survive here for long. I’m a visitor only, and must return to civilization. But for a brief moment, I’m welcomed in a prehistoric home: the wild.