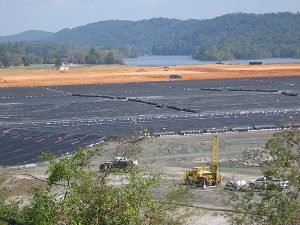 The black liner covering the coal ash containment cell, above, will be topped with two feet of soil and grass when the Tennessee site is converted to a park. Photo by Cat McCue.

Just after midnight, a thunderous swell of sound peeled apart the silence that had settled onto Harriman, Tenn. A mountain of black coal ash — the waste byproduct of burning coal — descended upon the surrounding neighborhood, snapping trees and ripping three homes from their foundations. The Emory River was choked to a trickle as more than 300 surrounding acres were covered in a toxic sludge.

The 1.1 billion gallons of waste — with a nearly identical cleanup cost — that cascaded from the Tennessee Valley Authority’s Kingston Fossil coal-fired power plant on Dec. 22, 2008, marked the largest industrial spill in United States history. When the public took in the sight of 10-foot-high ash piles and dead fish strewn across a hellish scene that morning, no one could have anticipated what would follow.

“Fish Appear Healthy After TVA Coal Ash Spill,” reported a headline in The Chattanoogan nearly two years after the event. That same year, the Tennessee Department of Health released their final public health assessment: no evidence had been found of drinking or groundwater contamination. While the same cannot be concluded for the impoverished Alabama community where much of the coal ash was shipped, TVA ratepayers found that their wallets suffered more enduring damage than the environment.

“I couldn’t believe we weren’t finding more impact,” says Dr. Shea Tuberty, an associate professor of biology at Appalachian State University. For two years after the spill, Tuberty worked with a team of researchers and environmental stewards assessing the ecological impacts of the disaster.

Despite the magnitude of the spill, nature seemed to work to the advantage of the TVA: fresh sediment swept in from the Emory River, covering the ash not removed during the cleanup, and the Emory joined the massive flow of the Clinch and Tennessee rivers, effectively diluting much of what pollution remained.

Analysis of fish tissue did show elevated levels of selenium, arsenic and heavy metals, exposure to which can cause health effects including cancer, autoimmunity and respiratory illness. But on average, Tuberty says, levels seldom exceeded the toxic threshold dose that triggers these harmful effects. After observing levels of heavy metals in fish peak, then drop off to normal averages, the team decided to conclude their research.

The most overwhelming effect on the environment may have been the initial physical impact: the tsunami of ash and loss of habitat. Even weeks after the spill, Tuberty recalls water with the consistency of a milkshake, and fish with coal-black gills and stomachs full of ash.

But the TVA denied that fish had died. “They were picking up trash bags full of dead fish while they were slurping off all the coal ash,” Tuberty remarks. “That level of dishonesty was completely unnecessary.”

Aside from this, Tuberty says, the TVA also took some samples upstream from the site of the spill and — due to a mistake in their analysis — reported lower levels of heavy metals in fish than many outside studies. Given the diluting power of the rivers combined with sustained cleanup efforts, it seemed the TVA was scrambling to hide an environmental fallout that never came to pass. 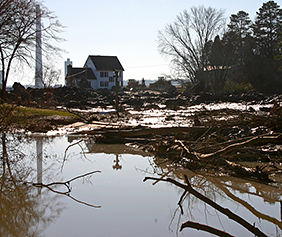 But while the efficiency of the remediation was unexpected, the spill itself was not. The holding cell for the coal ash was never built right. Sitting on a tenuous water foundation, its 60-foot-high walls were made of recycled coal ash sediment and lacked any reinforcing steel or concrete. Residents had reported seeing workers fix leaks in the wall several times in the decade leading up to the spill.

According to a report filed by TVA Inspector General Richard Moore in 2009, engineering consultants had warned the utility in 1985, and again in 2004, that the wall might fail. Yet due to a lack of state or federal regulations regarding coal ash — an absence that still exists today — the TVA was able to exercise their liberty to ignore these predictions.

Costs in the aftermath of the spill have been enormous — both economically and psychologically. Many residents chose to build their lives by the Kingston plant because of the area’s natural beauty. The adjacent reservoir was a popular birding area where you could see “huge populations of great blue herons and ospreys like pterodactyls landing on the trees in the spring,” recalls Tuberty. But for most residents, the damage and lingering fears of contamination were too great to allow them to remain in the homes they had grown to love.

The current price tag of remediation efforts has already exceeded $1 billion and, according to a TVA budget report released last fall, could rise to as much as $2 billion. These costs encompass site repair and cleanup, compensation to property owners and converting TVA’s other high-risk wet-storage facilities — where coal ash is mixed with water and stored in massive ponds — to safer dry-storage landfills that cannot break out in a catastrophic flood.

Ratepayers will shoulder most of this financial burden. Beginning in October 2009, more than nine million residents throughout TVA’s service territory experienced a rate increase of 69 cents per month. In order to foot the bill, this will continue through 2024.

The cost of the spill was not limited to the Tennessee Valley. More than 300 miles away in Perry County, Ala., the social and environmental burden of more than four million tons of the 5.4 million-ton spill is borne by residents living in the small, rural community of Uniontown. Between 2009 and 2010, hundreds of trainloads of dry coal ash were shipped here — the heart of Alabama’s “Black Belt” — where more than 75 percent of residents are African American and nearly half live in poverty.

According to a study conducted in North Carolina, landfills are 2.8 times more likely to be sited in areas where the minority population exceeds 50 percent. This is a phenomenon known as “environmental racism,” and Dr. Robert Bullard, dean of the School of Public Affairs at Texas Southern University and a founding voice for the environmental justice movement, believes this was at play when the Kingston coal ash was relocated from a predominantly white to a predominately black community.

Bullard adds that shipping the coal ash to Uniontown was only an extension of the initial injustice: the opening of the landfill in 2007 despite widespread opposition from the community. In both instances, residential concerns were ignored by elected officials and the U.S. Environmental Protection Agency.

When the coal ash came, Bullard says, “Newspapers reported that the landfill was in an isolated location, there was no community opposition, and it would bring economic development.” A public hearing for residents to voice their concerns was held only after the permit for the landfill had already been signed. As for economic development, it was a hollow promise from the start. Jobs that arrived to help unload the coal ash are long gone — disappearing with the last train’s shipment.

Although there have have been no published studies on the human and environmental impact of the coal ash in Uniontown, the effect is palpable. The coal ash here was not subject to the same level of precaution as the remaining coal ash stored at Kingston; mounds of dry ash are visible above the tree line, lacking a protective cover to prevent dust from blowing into the neighborhood. It rises from the landfill to coat the cars and clotheslines of nearby residents.

“Landfills don’t make good neighbors,” Bullard says. “Before the landfill came, this land was basically farms, cattle fields and trees. People enjoyed working outside, but [now] you can smell the landfill. It’s destroyed their life, and it might destroy the land and their livelihood. And they’ve been powerless to stop it.”

With the help of attorney David Ludder, as well as attorneys from the environmental law firm Earthjustice, residents of Uniontown have filed a discrimination complaint with the EPA’s Office of Civil Rights. The office agreed to investigate the complaint this past July, but since then there has been no significant action.

This lack of action has been true for much of the national debate as well. The now-notorious Kingston coal ash spill shined a harsh spotlight on the absence of federal coal ash standards. It was not until October 2013 when a federal judge sided with environmental groups — including Appalachian Voices — that the EPA was ordered to comply with a congressional mandate to establish coal ash regulations. On Jan. 29, 2014, the EPA announced that these regulations will be published by Dec. 19, 2014. The strength of these forthcoming rules remains uncertain.

At the Kingston plant, the TVA is just a year away from bringing their site remediation efforts to a close. TVA Spokesman Scott Brooks says the disaster site will be converted to a park, with ballfields and a green space. “We’re going to leave the area around the spill as an asset to the community,” he adds.

Yet it would be no surprise if residents are not inclined to offer thanks for this “asset.” Much of the enormous cost for the Kingston coal ash spill has been passed off to the community. And with the debate about how to handle coal ash still unresolved, Kingston is at risk of becoming nothing more than a notation in an ongoing timeline of preventable accidents.