The old adage holds that it takes a village to raise a child. But in Harlan County, Ky., the community has come together to raise more than that, including: theater sets, awareness and, ultimately, spirits.

A series of participatory community theater projects, “Higher Ground” involves upwards of 100 Harlan County locals as actors and musicians, working in conjunction with national theater artists. The original performances confront difficult issues facing coalfield citizens today, as well as celebrate the strengths of the region and its people. 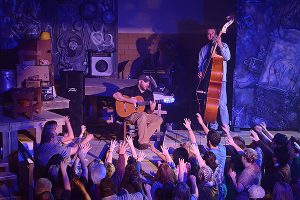 Justin Taylor performs an original composition in Foglights, a community theater production in eastern Kentucky. Photo by Ben Rorick for the “After Coal” documentary project

Produced by Robert Gipe, director of The Appalachian Program at Southeast Kentucky Community & Technical College, and a coalition of scholar-artists, “Higher Ground” launched in 2005. The first show was a collaborative effort between the late Appalachian author and playwright Jo Carson, director Gerard Stopnicky and Harlan County community members. The drama focused on widespread prescription drug abuse in the Appalachian coalfields, drawing its script directly from interviews with area residents.

This first production was such a success that Gipe and his team received funding to stage two more dramas, in 2009 and 2011. In 2013, grant money from ArtsPlace America supported the fourth production, “Foglights,” so named to describe the area’s metaphorically foggy future given the ongoing decline of the area’s once-dominant coal market. The cast for each show has ranged from young children and their parents to college professors and retired coal miners.

Living in a region beset with years of socio-economic woes, Harlan County residents are using theater to discuss present concerns and envision a brighter future: one in which the community can move beyond the issues that are holding it down, onto solid, higher ground.