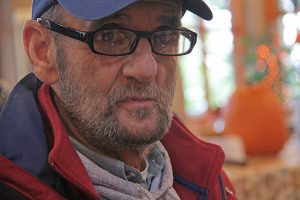 In this issue, we celebrate some of the engaged citizens, motivated visionaries and creative collaborations that enact the famous adage, attributed to Mahatma Gandhi, to “be the change you want to see in the world.”

The profiles in the following pages honor a sample of the hundreds of Appalachians who are doing their part to make our communities stronger, our mountains greener and our future brighter.

At Appalachian Voices, the nonprofit organization that publishes The Appalachian Voice, it’s impossible to think of regional visionaries and leaders without considering one of our own — Senior Campaign Advisor Lenny Kohm.

His journey into environmental work began on the coastal plain of the Arctic National Wildlife Refuge in Alaska and Canada in 1987. Kohm had arrived as a photographer, but developed a deep connection with the native Gwich’in people, which spurred his transition from journalist to activist. For thirteen years, Kohm helped organize a successful campaign to protect the area, traveling the country with representatives of the tribe and speaking to audiences of all stripes about the Alaskan land and people threatened with oil development.

“Some would see a separation between the social justice issue and the ecological issue, and that, I think, is a fallacy,” Kohm says. “There is no separation. They are one and the same. The people are part of the system.”

At Appalachian Voices, Kohm incorporates that philosophy into building public awareness of mountaintop removal coal mining. He first witnessed the practice in 1998, when he came to the region at the behest of Appalachian Voices founder Harvard Ayers. Kohm spearheaded the Appalachian Treasures Tour, which connected residents impacted by large-scale surface mining to communities around the country. He believes the surest way to end the practice is to outlaw it, and maintains that constituent outrage and pressure is a critical component of any winning campaign.

Now, at age 74, Kohm is embarking on a new project called Boots on the Ground, an initiative to help communities become better at grassroots organizing. Everyone is passionate about something, Kohm says; the role of professional organizers is to provide people who are fervent about social justice or environmental issues with “the tools they need to nurture that passion.”

Kohm sees the current fights for environmental and social justice as episodes in a perpetual vigil. “We’ll never achieve perfection, but we can get a lot closer than we are now,” he says.

Years ago when working in Alaska, Kohm joined on a traditional caribou hunt that included a father and his young son Lance. On a recent trip to celebrate the 25th anniversary of the effort to protect the Arctic National Wildlife Refuge, he watched as Lance returned from a similar hunt with his young son. To Kohm, that moment describes his motivation and his hopes for the future.

“Maybe the work I did moved the needle just a tiny little amount that helped provide the continuation of that tradition,” he says.