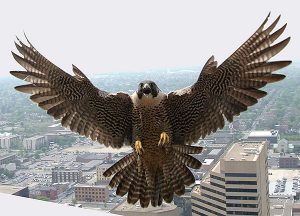 Peregrine falcons like nesting up high to survey their surroundings, preferably along cliff face sand mountain ridges, but they also take to bridges, radio towers and skyscrapers in cities like Columbus, Ohio, above. Photo courtesy of Ohio Department of Natural Resources

High atop the cityscape, yellow-ringed eyes squinting in morning sun, the dark silhouette of a peregrine falcon lies in wait of the perfect ambush. As a low-flying pigeon approaches, the peregrine leaps into a dive, closing the 100-foot gap within seconds. In a flurry of feathers, she plucks the unsuspecting pigeon out of the air with her long curved beak — the peregrine’s military precision kills on impact, allowing for a calm flight back to the nest to share breakfast with her young.

Adorned with a dark cowl and cape, peregrine falcons have become urban crusaders in major metropolitan cities from New York City to Knoxville. Substituting the outcroppings of skyscrapers for their usual niches along cliff faces, these threatened birds of prey have been forced to adapt to expanding human habitats in the Appalachian region. But, for a species that was believed to be extinct in the eastern mountains, their perseverance in the face of human encroachment is nothing short of admirable.

During winter months, peregrines migrate as far south as Peru and Argentina. Creatures of habit, falcons are known to migrate between the same series of nests every year. Not all peregrines in the Appalachians are migratory, however, especially those with established urban territories. Since large cities produce heat and absorb a great deal of solar heat during the cold season, city climates often remain suitable for peregrines year-round.

According to Appalachian State University graduate researcher Angela Langevin, the biggest threat ever posed to peregrine falcons in the Eastern United States was the widespread use of chlorinated hydrocarbon pesticides such as DDT in the mid-1900s. These pesticides contain chemical compounds that bioaccumulate through the food chain, resulting in reproductive issues for contaminated females. Affected falcon eggs were notably thinner and more brittle, leading to an increased mortality rate during incubation. By 1970, the U.S. Fish and Wildlife Service listed the species as endangered. But within two years, the newly formed U.S. Environmental Protection Agency had issued a cancellation order on DDT, classifying the pesticide as an environmental risk and probable human carcinogen.

The first peregrine recovery efforts began at Cornell University, whose ornithological lab bred the falcons in captivity for release once they reached maturity. The reintroduction program in the Appalachians started in 1973, and within 20 years nearly 250 captive-bred falcons were returned to their historical habitats on cliff faces and along river valleys. Breeding success in the natural environments is statistically much better than mated pairs nesting in urban areas.

Peregrine falcons prefer to breed in the late spring and early summer, with females ultimately picking their ideal suitor after weeks of aerial acrobatic displays by competing males. Once mated, peregrines unite in a lifelong monogamous relationship that is rekindled annually during breeding season. The peregrine population in the Appalachians has increased by about ten percent annually since being removed from the endangered species list in 1999.

• Peregrine falcons are approximately 15 to 21 inches long with a wingspan of about 40 inches.
• Both males and females showcase a proud chest of white and black-speckled plumage, which helps them remain undetected while circling above prey.
• Peregrines, the fastest animal in the world, can exceed 200 miles per hour in a vertical dive.
• Adult females are often as much as a third larger than their male counterparts.
• Peregrines have one of the longest migrations of any North American bird, extending from northern Canada to the southern tip of South America.
• A group of falcons has a variety of names, including: a bazaar, a cast, a tower, and an eyrie.
• Peregrine falcons feed primarily on other birds, such as songbirds, shorebirds, ducks and, in urban areas, starlings and pigeons.