New Research and Lawsuits Keep Mountaintop Removal in the Spotlight

While battles over mountaintop removal permits reach their boiling point and lawsuits are filed and settled, new research revealing the environmental costs continues to pile up. 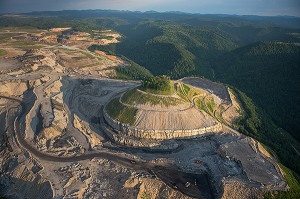 Referred to as an “island in the sky,” the Jarrell Family plot is surrounded by Alpha Natural Resources’ Twilight surface mine complex. Descendants of those buried there are suing Alpha to prevent further damage to the cemetery and gain less restricted access to the gravesite. Photo by Ami Vitale, www.amivitale.com.

In September, a study by Duke University, Kent State University and the Cary Institute for Ecosystem Studies compared the environmental toll of mountaintop removal to the economic benefits of coal as an energy source.

Considering the impacts of mountaintop removal on the health of Appalachian ecosystems, the study concludes that tremendous environmental capital is being spent to achieve what are only modest energy gains.

“While the scientific community has adequately demonstrated the severity of surface mining impacts,” writes Brian D. Lutz, the study’s lead author, “considerably less attention has been placed on understanding the extent of these environmental impacts and in providing the metrics necessary to compare these environmental costs to the obvious economic benefits of coal.”

To meet current U.S. coal demand through surface mining, the study found that an area the size of Washington, D.C., would need to be mined in Central Appalachia every 81 days.

The new study further considers mountaintop removal’s contribution to an increasingly unstable climate. Based on the carbon sequestration potential of Appalachian ecosystems, researchers found it could take 5,000 years for 100 acres of reclaimed mines to sequester the carbon released from combustion of the coal removed from the same area.

Lutz’s study did not focus on the increased health risks faced by communities closest to mountaintop removal mines documented by more than two dozen studies. Despite the coal industry’s attempts to discredit the research, environmental advocates have used the conclusions to make their case in court.

Across Appalachia, environmental advocates and residents are challenging mountaintop removal coal mining companies in court. The variety of outcomes and legal actions reflect widespread opposition to the consequences of the practice.

In Boone County, W.Va., residents are suing Appalachian coal mining giant Alpha Natural Resources to repair and protect the Jarrell Family Cemetery from being further damaged by the Twilight Surface Mine complex that surrounds the plot.

“I don’t know why anybody would want to be buried here now,” plaintiff Dustin White said to The State Journal. “You’re being buried in the middle of a construction zone basically with heavy explosives going off around you. I don’t know how anybody can rest in peace anymore.”

Jarrell family members hope to win a permanent entrance to the cemetery, and the right to visit their ancestors when they choose without an escort from Alpha or the West Virginia Department of Environmental Protection.

An Appeal for Community Health

Kentuckians for the Commonwealth and the Sierra Club are appealing an Aug. 23 court decision that said the U.S. Army Corps of Engineers, the agency which issues permits for mountaintop removal, is not required to weigh the cumulative health impact of an entire mining operation.

In their arguments before the court, KFTC and the Sierra Club cited the growing research that has found a relationship between surface mines and health problems among nearby residents. Attorneys for Leeco Inc., a subsidiary of James River Coal, argued that the studies have not proven that mining is a direct cause of health problems.

Two weeks after the initial decision in the case, U.S. District Judge Thomas B. Russell directed the Corps of Engineers to temporarily suspend a permit for the contested 756-acre Stacy Branch mine in Knott and Perry counties.

Members of KFTC celebrated the decision to temporarily stop the Stacy Branch mine, saying a possible appeals victory would be fruitless if the court had allowed mining to proceed.

Closures on the Cumberland Plateau

In Tennessee, one of the state’s most prominent and unpopular mountaintop removal mines is being forced to close after a two-year legal action filed by the Sierra Club, Statewide Organizing for Community Empowerment and the Tennessee Clean Water Network. The lawsuit alleged that National Coal repeatedly violated the Clean Water Act at the Zeb Mountain mine.

The agreement does not automatically prevent another coal company from attempting to mine Zeb Mountain in the future. “But if they do,” Tennessee Clean Water Network attorney Stephanie Metheny said, “we’ll sue them up one side and down the other.” 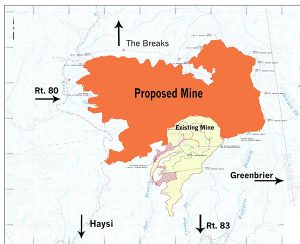 In September, the U.S. Army Corps of Engineers granted Paramont Coal, a subsidiary of Alpha Natural Resources, a permit for an 860-acre mountaintop removal mine in Dickenson County, Va. The U.S. Environmental Protection Agency is concerned that the Doe Branch mine will discharge waste into streams already impaired by an existing 245-acre mine. The Doe Branch mine is slated to be part of the controversial Coalfields Expressway, a project that would subsidize mountaintop removal to build a highway in southwestern Virginia.

In East Tennessee, Appolo Fuels has submitted a permit application for an 804-acre mountaintop removal project in a heavily mined area of Claiborne County. Residents worry that expanding operations along the Cumberland Plateau will irreversibly damage streams and possibly lead to the local extinction of blackside dace — a ray-finned fish currently on the threatened species list — in streams surrounding the mines, which eventually feed the Cumberland River.