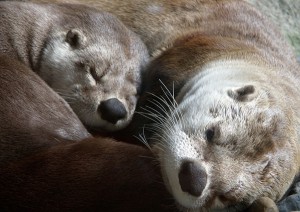 River otters are always happy to play, but they are mainly solitary animals. Males do not associate with females until mating season, and only then will you see pairs chasing each other through the river as part of their mating ritual. Otherwise, groups are mainly comprised of a female and her pups. Photo by Kristin Wall

With short legs, a slender body, webbed toes and a generally friendly personality, American river otters are one of the most charismatic creatures in the country. These four-foot-long mammals once flourished in the eastern part of the United States, including Appalachia.

But as America rose in population, so did the amount of unregulated trapping and habitat destruction, causing a huge depletion in the population between the 1500s and early 1900s.

Western North Carolina’s otters appeared to disappear more quickly as fish — the main source of food for otters — died because of water pollution and soil erosion.

West Virginia was one of the last states to lose the otter population. The last original wild otter was seen in the 1950s, though a few may have survived, says Joshua Vance, a wildlife biologist for the West Virginia Department of Natural Resources.

But luckily, various wildlife resource agencies in states throughout Appalachia have spent the past 30 years reintroducing otters to wildlife areas in hopes of restoring the mammals. In North Carolina, while the population was depleted in the mountains, otters were still abundant in the eastern part of the state, and some of these were reintroduced in the mountains.

In addition, starting in the 1980s, 21 states and one Canadian province began otter reintroductions through trading with other states. A participant in that process, West Virginia now has a replenished population and, as of 2011, allows regulated trapping of otters.

With the signing of the Convention on International Trade in Endangered Species in 1977, states are required to continue monitoring the otter population, even though they are no longer considered endangered in most states. 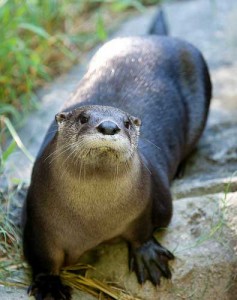 An otter pauses at the North Carolina Zoo. Photo by Richard Schuerger

An abundant population has a different meaning for otters compared to other wildlife. In a well-populated area, it is common to have only one family of otters for every 10-20 miles of streams. As the population increases, human interaction may be more common, especially because of the otter’s natural curiosity and nearsightedness — an adaptation that helps them to see better while underwater.

In addition to their primary diet of fish and crustaceans — especially crayfish — otters will also eat injured birds, insects, and, only very rarely, small mammals. While hunting for food, otters will also travel into urban areas, increasing the chance for a sighting.

Another characteristic unique to otters is the range of noises they make. The most common sound humans hear from otters is a chuckle that happens among groups of otters. But when upset, river otters produce a growl or hissing sound and can give off warning sounds by snorting air quickly through their nostrils.

The otter is most active during the night, but conservationists are hopeful that the days ahead will continue to be full of the charming critters.

• Baby otters, called pups, stay with their mother until around eight months old. After leaving their parents, siblings will live together in a separate area for several additional months.

• Even though otters spend a lot of time in the water, pups have to be taught to swim when they are around two months old. These “lessons” include parents holding the pup’s head underwater and then pushing their head back above water to breathe.

• River otters can hold their breath for four minutes on average.

• Otter fur is water-repellent, which is one of the reasons why they were trapped so often from the 1500s to 1800s.

• Otters are very playful and will slide down mud or ice into rivers and have wrestling matches with one another.