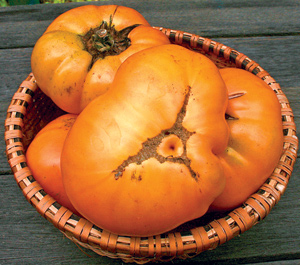 Tomatoes are one of the most popular heirloom plants for gardeners to grow. Photo courtesy of Sow True Seeds

Woody Malot loves talking about heirloom seeds and seed saving. He gives out heirloom seeds to his friends and students, offers advice on how to grow them and emphasizes their stories and heritage. He is currently the head of the science department at Rabun Gap-Nacoochee School and owner of Barker’s Creek Grist Mill in northern Georgia.

“We’ve been saving seeds ever since I was a little kid,” Malot says. “My grandfather did it, my father did it.”

According to the Seeds Savers Exchange glossary, an heirloom is “any garden variety that has been passed down within a family or group, similar to pieces of heirloom jewelry or furniture.” Seed saving is the act of preserving reproductive material from these vegetables, herbs, grains or flowers from year to year, using their offspring each season. This is the traditional way to garden.

Keith Nicholson is a seed saving advocate who hosts regular workshops in western North Carolina, showing avid gardeners how to create their own heirloom gardens.

“The easiest way to start is by going to a local farmer’s market and picking up some heirloom tomatoes,” he says.

Nicholson says that hybrid crops, when created through traditional breeding methods, do have some advantages such as predictability and uniformity. Yet hybrids often require chemicals that eliminate beneficial organisms living on the plant and in the soil around it. Heirloom plants, which sometimes produce irregular offspring, coexist with natural organisms and become a part of the local ecosystem and the area’s natural heritage.

Dr. Rosann Kent, director of Appalachian Studies at the University of North Georgia, says seed saving is a way for Appalachia to preserve its unique culture.

“One of the challenges facing southern Appalachia is that local residents often are marginalized as their communities are gentrified and mountains developed,” Kent says.

Keeping up such a long-standing tradition can be tough. Malot says he gives away seeds to encourage the use of heirloom plants, but is often rejected due to lack of interest. In some communities, however, gardeners are excited about traditional seeds. Companies such as Southern Exposure Seed Exchange in Mineral, Va., and Sow True Seeds, in Asheville, N.C., sell heirloom seeds and host regular seed swapping events. There, heirloom lovers can trade different varieties.

Dr. Kent and her students recently conducted a study, mapping out seed savers in Lumpkin County, Ga. One of the participants was resident Carol Meeks.

“What you always did was [with] your neighbors or your family … you just went and got [seeds], whatever they had,” she says. “It’s still a lot that way today.”

To many seed savers, preserving seeds is about much more than sustainable gardening. “It means passing on to the younger generation both the genetic materials, as well as the stories that go with it,” says Malot. Appalachia has a strong culture of self-reliance and tradition, and seed saving is one way to keep both of those alive.

UPDATE: This article has been modified to correct an error. The original mistakenly said that Nicholson believes genetically modified crops offer both advantages and disadvantages — he was referring instead to hybrid crops, which are developed through traditional breeding methods unlike genetically modified organisms.