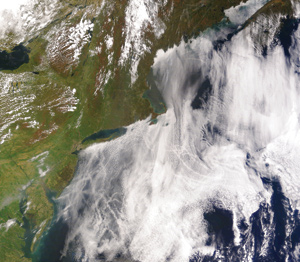 Around the world, farmers are arguably the first to feel the impacts of climate change, and of all the systems put at risk, food may be the most fragile. Some of the largest grain and livestock producing states are still recovering from last year’s drought-stricken season. And forecasts for this summer are calling for frequent storms, erratic precipitation patterns and expanding drought.

While Appalachia has not seen severe weather of the same magnitude or frequency as America’s heartland, the region is similarly vulnerable to price volatility of food staples, threats to forest ecosystems, and severe rain shortages and surpluses that cause dry spells and flooding.

Two reports released by the U.S. Department of Agriculture in February address the long list of pressures climate change will put on the food and forest systems that are central to Appalachia’s agricultural economies. Short-term impacts will be caused by invasive species and insects, leading to a higher cost for pest control. The wildfires so prevalent in the Great Plains and grasslands last year will also increase. By mid-century, the area of the United States susceptible to wildfires is expected to double.

While the Southeast and areas with higher elevation are not expected to warm as quickly as other parts of the country, even slightly higher temperatures can shift growing seasons and stress crops, and potentially drier summers in parts of the Southeast could lead to water shortages and irrigation woes.

To improve the agricultural sector’s resilience, state climate offices and groups such as the Southeast Climate Consortium are conducting research and educating farmers on climate variability and predictions for long-term temperature trends.

According to the USDA, farms must adapt while states and the federal government work to mitigate the factors putting agriculture at risk. Growing a diversity of crops, having advanced irrigation technology, fertile soil, clean water, and the knowledge and financial security required to respond will help current and future farmers meet the climate challenge.

While it may take longer for the most crippling effects of climate change to reach many parts of Appalachia, being unprepared will come at an increasingly high price.