A report released in May by the West Virginia-based consulting firm Downstream Strategies underscores the need for investment in Central Appalachian counties hardest hit by a decline in coal production and demand. By looking at market and regulatory factors, plus trends in the U.S. and abroad, the report offers a comprehensive examination of the challenges the region faces. 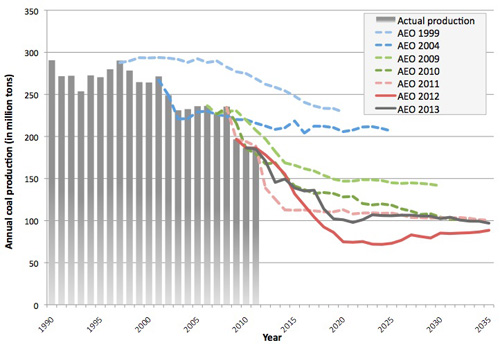 Since its peak in 1997, Central Appalachian coal production has declined faster than annual projections by the U.S. Energy Information Administration. According to the report, production has fallen by 55 percent in Tennessee, 44 percent in eastern Kentucky, 37 percent in Virginia, and 29 percent in southern West Virginia. In 2011, regionwide production was only 185 million tons — just 17 percent of total production nationwide.

The report points out that coal-fired power plants in the eastern United States remain the most important purchasers of Central Appalachian coal, but demand by the electricity sector has dropped precipitously since 2006, contributing to economic turmoil where the coal is mined. The imminent retirement of coal-fired power plants in the region will continue to impact mining employment and severance tax revenues. According to the report, thirty of the 137 power plants that purchased coal from mines in Central Appalachia are scheduled for retirement by 2016.

Counties in eastern Kentucky, where severance tax revenues are in a long-term decline steeper than other states, are most vulnerable to the retirements. Eastern Kentucky mines accounted for approximately 60 percent of all Central Appalachian coal shipped to retiring plants in 2011.