Tom Cormons: A Leader With a Purpose 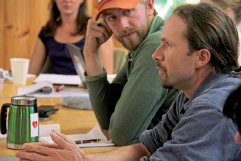 Tom Cormons, new executive director for Appalachian Voices, (right) leads a discussion during an organizational staff retreat. “We are very fortunate to have a man of his vision and talent at the helm as we embark on the next chapter of Appalachian Voices’ journey,” says Board of Directors Chair Christina Howe.

When Tom Cormons left the East Coast to attend college in Charlottesville, Va., it didn’t take him long to fall in love with the mountains.

Every opportunity he had during his time at the the University of Virginia, he hiked, paddled and climbed in the rugged mountains of Appalachia.He eventually met his wife, Heather, while working as a whitewater guide on West Virginia’s Gauley River. Even through his years of pursuing an environmental law degree at UCLA and working in Washington, D.C., for the U.S. Justice Department, Tom’s passion for the mountains — and a desire to protect them — never wavered.

That desire, combined with an extensive background in wildlife research and energy policy as well as six years of leadership experience at Appalachian Voices, is what led Tom to become the organization’s new executive director.

Tom joined Appalachian Voices as a member 12 years ago, inspired by the mission to protect the mountains he had grown to love. In 2007, he joined the staff to establish the organization’s Virginia office and program. In the past few years, he has expanded the Virginia office to a staff of five, and positioned Appalachian Voices in a leading role in the efforts to bring cleaner energy to the commonwealth.

“I am honored to now lead this organization, whose staff, board, members and partners continue to inspire me every day,” Tom says. “I’m very motivated to help our region transition to cleaner energy and to ways of supporting people’s livelihoods that respect our natural heritage.

“What we do to the mountains, forests, and creeks has tremendous implications for people living here now, as well as for what we’ll be passing on to our children and their children,” Tom continues. “With three young kids myself, this is always on my mind.”

“As I’ve worked with Tom over the years, I have witnessed his thoughtful, contemplative, and intelligent work mature and shine,” says Kathy Selvage, a coal miner’s daughter from Wise County, Va., who has worked to end mountaintop removal, and currently serves on Appalachian Voices’ board. “His love of the Appalachians, its flowers and fauna, and its people and culture, will be the lynchpin of his leadership. Appalachian Voices is in good hands.”