The Great Depression was a time of dust bowls and poverty, but at least cities had electricity.

The rural areas had it rough. Citing high development costs and low profit possibilities, utilities often denied electric service to farms, hollers and other far-off places. And even when these country communities had the opportunity to purchase electricity, they often paid much higher prices than their urban counterparts.

This changed with Roosevelt’s New Deal, which created the Rural Electrification Administration. Avoiding direct government competition with private industry, the agency funded and provided assistance to people who pooled their money together to form electric cooperatives. By 1939, with the administration’s help, 417 rural electric cooperatives had formed to energize the outskirts. Today, more than 900 exist, generating and distributing electricity to more than 42 million customers across the nation.

Because electric cooperatives are owned by the members, their profits go right back to making the company more effective or paying back the member-owner. They’re unlike investor-owned utilities, which must strive to create profit for their shareholders, and public utilities, which are mostly run by governmental interests.

In South Carolina in the late 2000s, the cooperatives’ focus on serving member-owners meant recognizing some budding problems. Electricity demand was growing. Energy prices for coal were becoming more volatile. Building more lines and transmission equipment would mean that members would have to pay higher rates.

The cooperatives, which serve more than 1.5 million members across the state, had two paths: either build a new nuclear power plant or steer their members toward energy efficiency as part of a long-term, coordinated energy plan.

The South Carolina co-ops chose the latter, leading them to a pilot program called Help My House.

The Help My House pilot program was first made possible when the South Carolina legislature passed a bill enabling the use of on-bill financing in 2010. 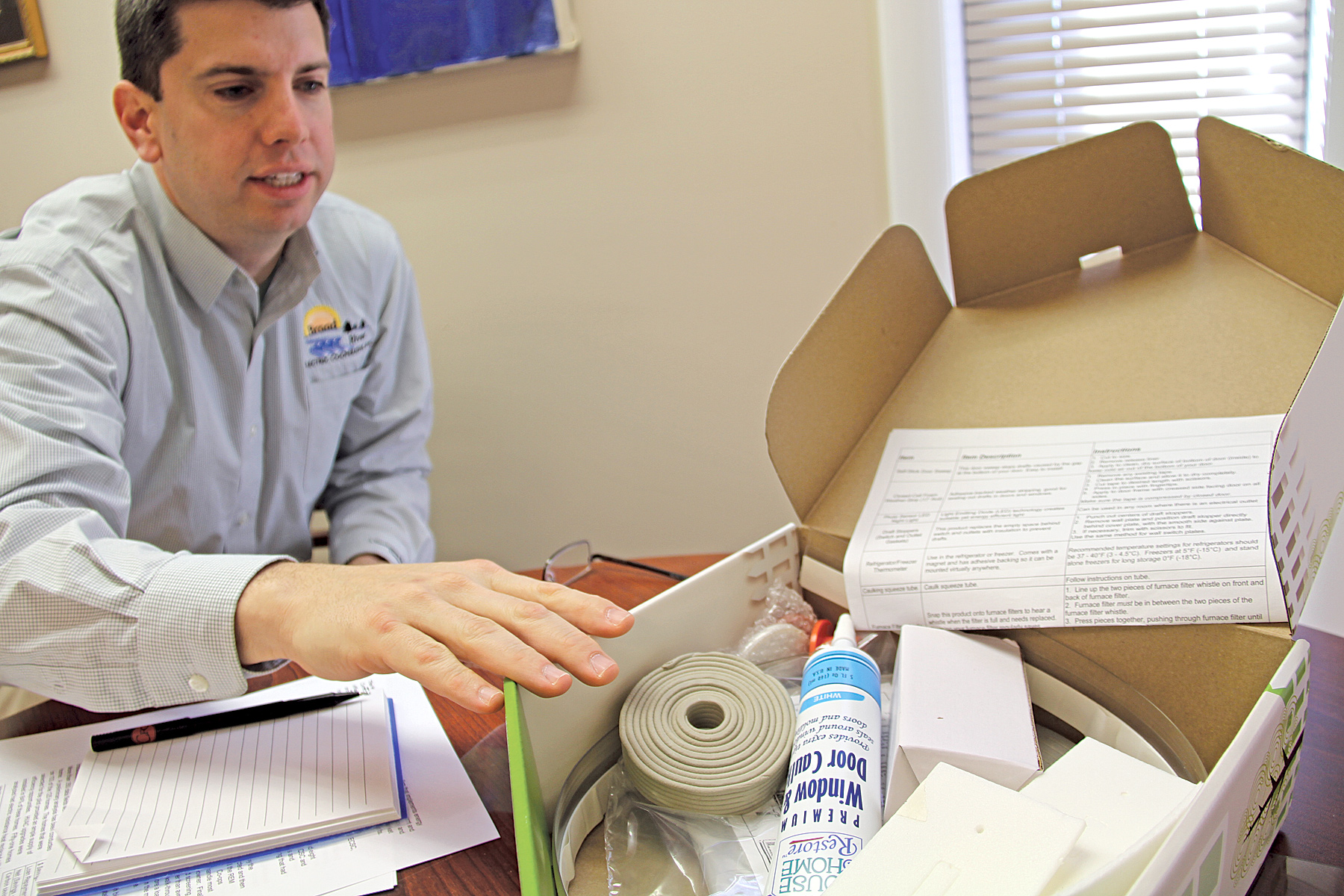 On-bill financing has a few moving parts, but it’s one basic concept: you get a low-interest loan for energy efficient retrofits on your home or rental property, and you pay it back on your utility bill.

The energy efficiency loan usually doesn’t require a credit check or any money upfront from the customer. It doesn’t follow the customer around, either — it is instead attached to the meter’s monthly bill and paid back by the current renter or homeowner over the course of five to ten years. If properly charted out for the home, on-bill financing should save the consumer money over the life of the loan repayment.

To fund this project, Central Electric Power Cooperative, the generation and transmission co-op for the state’s 20 distributing cooperatives, secured a $740,000 loan from the Rural Economic Development Loan and Grant Program, the first time a loan of this type was used for an energy efficiency program.

Eight of the state co-ops opted in. By February 2012, these cooperatives had installed energy retrofits in 125 homes across the state. The retrofits ranged from duct sealings to HVAC replacements, all of which were done with local contractors trained by Central Electric. These upgrades were screened after installation, to make sure that the work was satisfactory.

The pilot program is a win-win for South Carolina, says John-Michael Cross of the Environment and Energy Study Institute, which assisted with program design and outreach for Help My House. “Reducing per capita demands in growing regions allows co-ops to not have to build new capacity, but rather to serve their members… while keeping prices down,” he says. “Individual homeowners get lower bills and more comfy homes.”

Robin Hollingsworth, 60, lives in an old farmhouse outside of Blacksburg, S.C. Every day at five, she feeds her horses, and her dogs run around the land.

Hollingsworth’s home was one of 16 chosen by the Broad River Electric Cooperative for the Help My House program. Since her home retrofits a little over a year ago, she’s seen her energy usage drop by 45 percent. While her bills over the past year have remained neutral, she will see energy savings once her loan’s repayment period is up. For now, she says she couldn’t be happier with the farmhouse’s energy efficient upgrades.

Hollingsworth, like other participants, was screened beforehand to make sure that her bills would either be neutral or save her money on loan repayments. Not everyone is meant for the program.

That part sticks with Josh Crotzer, member services coordinator at Broad River. He says that the cooperative’s “intent was to push [Help My House] to lower income homes who wouldn’t be able to afford this otherwise.” A big part of the program’s appeal is the elimination of the upfront capital that the member might balk at spending on the retrofit.

The Broad River cooperative runs in the Appalachian foothills of South Carolina, in Union, Spartanburg and Cherokee counties. Based on a 2012 cooperative survey, 25 percent of Broad River’s members make less than $25 thousand a year — that’s compared to 15 percent at that income level nationally.

There are at least 20 states currently with on-bill financing programs, but the model is not prevalent nationally. Nor is it prevalent in Appalachia, despite programs such as the How$martKY pilot in eastern Kentucky.

Through a partnership with the Mountain Association for Community Economic Development, four cooperatives offered on-bill financing to members that used at least 21 thousand kilowatt-hours a year. At one of the participating co-ops, Fleming-Mason Energy, 30 percent of members are at or below the federal poverty line, often living in drafty mobile homes. With their retrofits, members in the program have saved about 500 kilowatt-hours each month.

Mary Beth Nance, director of member services at Fleming-Mason, hopes the program will gain the blessing of the Kentucky Public Service Commission and spread to the rest of the state. As for the remainder of Appalachia, where rural and nonmetro areas suffer from a poverty rate of 18.9 percent, well above the 14.3 percent national rate, the future of on-bill financing is undecided. 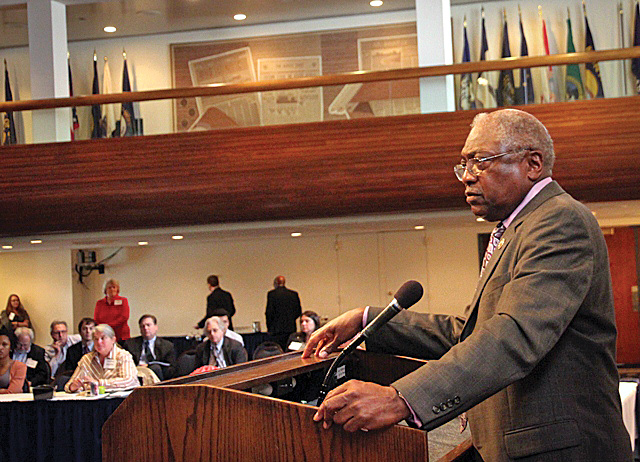 Rep. James Clyburn led the way in 2010 for the original Rural Energy Savings Program Act, which would boost funding for on-bill financing projects across the country. Currently, RESPA is held up in the federal legislature’s delayed Farm Bill. Photo by Luis Gomez.

Last July, U.S. Secretary of Agriculture Tom Vilsack announced plans to form the Energy Efficiency and Conservation Loan Program, which would give up to $250 million every year to kick off on-bill financing and other energy efficiency programs around the country. The rule just finished its environmental assessment and is now pending a final announcement.

John-Michael Cross says that, with South Carolina’s pilot program and others, federal money will have to play a large role moving forward. With private investors still uncertain, easily repayable loans from Washington, D.C., will help projects like Help My House sprout and thrive.

Another boost would be the Rural Energy Savings Program Act, now a part of Congress’s delayed Farm Bill. It would create a national program to offer zero-interest loans to rural electric utilities for on-bill financing projects.

Federal loans have already proved handy for some of the state’s co-ops, says Lindsey Smith, member and public relations director for Electric Cooperatives of South Carolina, a trade organization. Four of the initial co-ops who participated in the pilot are moving ahead with versions of Help My House, and a few others who were not part of the pilot are launching their own on-bill financing efforts.

In May, Central Electric will assess a report of Help My House’s first year of activity and decide where the statewide program will go. With more than 350 fields of data for the 125 participating homes, the report will comprise a year’s worth of information, ranging from each participant’s satisfaction with their upgrades to their historical energy use.

For Smith, the benefits of the program were many. “It’s putting people to work, saving the environment and saving the members money,” he says.

For others, such as Josh Crotzer, it’s about even more. “The co-ops brought electricity to rural America 75 years ago,” he says. “But that’s long forgotten.”

He stresses the importance of member satisfaction in an age when people feel like they can get electricity anywhere. “You have to dig beyond the surface of, ‘We sell electricity, so people using electricity is good for us,’” he says. “A better informed, more stable membership makes for a much stronger co-op.”

A fully implemented Help My House program
across South Carolina could:
– Save 2.7 million megawatt-hours per year
– Save $270 million for consumers every year
– Save up to 2.4 million metric tons of CO2 per year
– Create 7,113 jobs by 2030, largely through energy audits and retrofit installations
– Avoid the need for one-half of a nuclear power unit