The Ebb and Flow of Appalachia’s Game Species 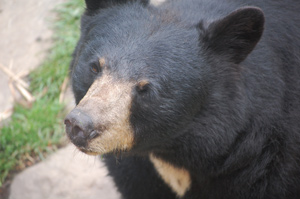 As a game animal, the black bear’s population health remains stable due to its use of diverse habitat and its omnivorous diet. Photo by Brian Hammond.

From the mythic, raccoon-crowned Daniel Boone to the adventurous, tradition-minded hunter of today, hunting in Appalachia makes up a long and colored tale. Its most intriguing characters may be the game species themselves, each accentuating a pastime and way of life which is slowly becoming history.

A Game Icon of Southern Appalachia

The ruffed grouse, a pudgy, non-migratory bird ranging from the Appalachians to Canada and Alaska, spends most of its time on the ground. Its gray and brown plumage helps it camouflage in thick brush, making it difficult for hunters to spot.

“Hunters like grouse because they’re challenging,” says Allen Boynton, a wildlife program manager for the Department of Game and Inland Fisheries in southwest Virginia. “They can be gone before you see them.”

Grouse are quick to flush (fly from their brushy hiding place) at unusual sounds and are fast enough to elude a hunter not primed and ready. “Flushing twenty or thirty and only getting a dozen in a season,” says Boynton, “would be considered good.”

Wildlife management has been increasingly concerned with local grouse populations, though hunting has little to do with the lower numbers. Rather, it is all about habitat. “The grouse is an iconic Southern Appalachian game bird,” says Chris Kreh, wildlife biologist for the N.C. Wildlife Resources Commission, “but it thrives in young forests of five to fifteen years.”

According to Boynton, the last time the Appalachian region was extensively logged was in the 1920s and ‘30s, and some trees today are reaching a century in age. Cutting is not nearly as widespread, and so neither are younger forests.

Herbaceous woodland cover is key to grouse avoiding predators such as hawks and bobcats, and also allows for crucial nest protection. The grouse is not such a simple homemaker, however, since younglings prefer grassland insects and more mature birds enjoy dining on nuts only old forests can provide.

Logging done without professional management, however, is always bad. “Amatuer harvesting can produce degradated water sources,” says Boynton, “and a loss of tree species important to certain squirrels and birds.” 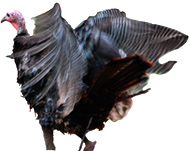 The eastern wild turkey is a large game bird that thrives in mixed habitat: forested areas for cover and open land for mating and brooding. Photo by Art Drauglis.

The eastern gray squirrel likes to nest in older hardwood forest trees where it enjoys cover and various nuts. While not as iconic as the grouse, the gray squirrel is still a quite popular game animal in Appalachia.

“In southwest Virginia,” says Boynton, “the most harvested game after deer is squirrel.” Timber harvests and surface mining, however, heavily contribute to the loss of squirrel habitat, while deer are better at adapting to changing habitat.

The white-tailed deer is ubiquitous throughout most of North America and no stranger to Appalachia. There are numerous complaints each year usually linked to car collisions as well as vegetable garden and farmland invasions, especially those involving damage to alfalfa and corn.

“Using hunting to manage populations can be a problem,” says Chris Ryan, a game management supervisor for the West Virginia Department of Natural Resources, “because the department can’t control access to private land.”

Deer will often keep to pockets on small acreages of land, rendering them difficult for hunters to cull a growing herd if they don’t have permission to venture there. Special hunting seasons aim to keep numbers at a safe level not just for humans, but also for the growth of regenerating forests and wildlife such as ground-dwelling birds which seek cover and nesting in the vegetation that large deer populations will severely overbrowse. 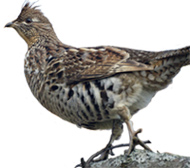 The chunky grouse is quicker than it looks. Many hunters lose them before they even get a glimpse. Photo by Ed Gaillard.

Though many don’t think of it as a hunted animal, the black bear is another celebrity game creature of Appalachia, with substantial seasons in all central and southern regional states. Population numbers are consistently stable, a point linked to the animal’s superb adaptability — it ranges between both U.S. coastlines and to Alaska and Mexico. Unlike deer, the black bear roams broadly and seldom pins itself down to a single habitat.

“We have over 1,000 complaints a year from the public,” says Ryan. Bears typically interfere with the community via trash or farmland crops, particularly corn. In woodlands they will scavenge as diversely as they need to, benefiting from the fruits and insects of the young forest, as well as the acorns and hickory nuts of older growth.

While deer and bear are less susceptible to loss of habitat, grouse and quail depend upon unique conditions. Before European settlers arrived, the bobwhite quail most likely frequented fields and woodlands burned by Native Americans. However, with the loss of farmlands in the region today, quail have fewer landscapes to call home.

“We get more complaints about quail populations being low than any other game,” says Boynton.

Restoration projects for quail center around farmland management, which is complicated by the woodland growth near these abandoned areas and, again, trouble accessing private land.

Hunters depend on stable species populations and healthy habitats for their hobby to be viable. Voicing their concerns to wildlife management and participating in harvest recordings are a couple ways hunters can aid other conservationists.

The future of hunting as an Appalachian tradition, however, is itself at risk. “It seems people in general are moving away from outdoor activities,” says Boynton. “Fewer hunters per capita participate in the seasons each year.”

In addition to changing human interests, coal mining and timber harvesting, as well as the degradation of grasslands, are altering hunting and game habitat in Appalachia to the benefit of some species and detriment of others.