Spelunking the Highlands | Owning the Caves 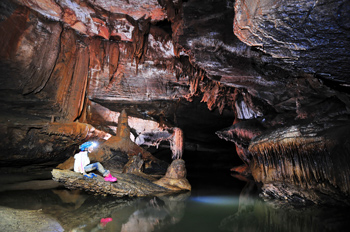 Dissolved layers of limestone, such as those near this stream in Worley’s Cave, pervade Appalachia. Called “karst,” this geologic formation starts horizontally in the flatlands, and goes in all directions when it hits the mountains. “Caves (in the mountains) are developed in folded rock,” says Bill Balfour, geologist. Because of the faulted, broken and thrusted rock, he says, these caves are typically not large, lacking the larger water recharges of their flatland brethren. Photo courtesy of James Fox.

With my headlight loosely strapped and my boots tightly tied, I walked into the mouth of Worley’s Cave and I realized something:
28 boy scouts.

That’s how many boy scouts you shouldn’t have on a caving trip.

Still, I enjoyed this pubescent expedition with River and Earth Adventures, Inc., a Boone, N.C.-based ecotourism business that offers rafting and hiking trips, among other excursions.

The caving isn’t free, but the trip is worth the money, if only to awe at an otherly world.

Worley’s Cave — a seven-mile tract near Bluff City, Tenn. — is named for Elias S.
Worley, its first owner. The site is also known as Morrill’s Cave, for the man who first explored and mapped its innards.

But Sloan, our knowledgeable and bearded guide, told us the cave dates back to more than 550 million years, when the Appalachian Mountains stood taller than Mt. Everest.

The cave, as a trek, was straightforward. As the tour’s website says, going through is about as tough “as climbing up onto your kitchen counter.”

The air was warm, nearly 60 degrees, and moist as our line of scouts pranced over a slick clay floor, lended hands on slippery slopes, and shouted encouragements between steep ledges.

We (read: the scouts) squeezed between two slabs of stone, slid down a sandy slide two stories tall, and tromped through pools of standing and running water.
We reached the apex of our journey near the foot of the Devil’s Staircase, in the enormous Big Room. Sloan didn’t expect it, but our boy scouts sat down and had lunch, something people don’t (read: shouldn’t) usually do in caves and their fragile ecosystems.

“How am I supposed to eat if my hands are muddy?” asked one scout.
Beside our party were wide, shallow pools of water called rimstone dams, caused by mineral deposits from flowing water. Sloan kneeled beside one pool and pointed at a half-inch black salamander.

We wandered over to the edge of the dams, where an enormous lake stretched into the darkness and a grooved ceiling arched a hundred feet overhead.

The water, unusually high from four days of rain, prevented us from continuing on the last leg of our journey, up the Devil’s Staircase, into the supposedly amazing Fairy’s Ballroom, and down another sandy slide into the normally shallow creek, which we’d then follow into daylight.

But not today. Once the scouts choked down their beef jerky, we hiked back to the entrance, noting the curious hanging speleothems (cave formations) called mineral curtains on the way.
But before completing our three-mile and three-and-a-half hour journey, we sat down and switched off our lights in a cavernous room called Base Camp.

Silence overwhelmed and the depths of the cave came to life.
And then somebody farted.
28 boy scouts.

Even without beef jerky scraps from boy scouts, caves are dependent on the outside world for food.

Detritus from decaying leaves and other organic material is washed in, and guano from cave crickets and bats is plopped down. From these resources, fungus and bacteria are able to grow, and “that sort of kicks everything off,” says Cory Holliday, cave and karst program director for The Nature Conservancy’s Tennessee chapter.

Cave creatures are often blind and colorless. Because caves lack large nutrient sources, the animals have slow metabolisms and move meticulously and gracefully.
“They don’t waste energy because they don’t have energy to expend,” says Holliday.
They also live a long time. Cave crayfish, for example, can live to 70 years. Compare that to three years for a surface crayfish.

One has to look hard to find them, but they’re there. Beetles, springtails and millipedes feast on the cave floor. Rare species of blind cavefish pass through the subterranean streams. Endangered amphibians such as the Tennessee cave salamander, with its lidless eyes, glide through streams.

Cave species aren’t the hardiest ecosystems, leaving them open to easy harm. Clearcutting forests on the surface can ruin the cave’s clean water and main food sources. Pollution from agricultural runoff or extractive practices such as hydraulic fracturing can also taint the water that the caves depend on.

At risk is the largely unmapped biodiversity of the region’s caves. In Tennessee, for example, Holliday says there are only ecological records for about two percent of the state’s 9,700 caves. This biological mystery intensifies in the Appalachians, where the unique karst geology limits the travel of species between caves.

“Endemism [being unique to a certain geographic location] just shoots through the roof [in Appalachia],” Holliday says. “The organisms in one cave may be completely different from those in a cave literally five miles away.”

White-nose syndrome, decimating bat populations on the East Coast, is European by descent, and almost all Old World bats are immune to the fungus. U.S. Geological Survey scientist Carol Meteyer told the Washington Post recently, “It’s cellular suicide. (The immune system) comes out in a huge wave, going out to those areas of infection and kills everything.” Scientists have likened the disease to AIDS. Photo by Al Hicks, NY Dept of Environ. Conservation.

When it hits, the bats are hibernating in their winter dens. The white fungus, also known as Geomyces destructans, spreads its powdery tendrils on their wings and faces, waking the bats from their slumber.

To fight the invading disease, the bat’s immune system goes into overdrive, destroying the illness but also the fat reserves and tissue that the bats need to live through the winter.

White-nose syndrome has killed five to seven million bats since first detected in 2006 near Albany, N.Y. Since then, it’s been found in 19 states, and Holliday, also a regional expert on white-nose syndrome, says that the fungus is just starting to hit its critical phase in the southern Appalachians.

A cave can have the fungus without showing dead bats right away, says Holliday. That makes the disease’s onset particularly hard to recognize. However, three or four years after the fungus first arrives, the cave will experience some kind of mass mortality event. Worley’s Cave, for example, saw its three-year mark last year when over 80 percent of the bats died. Another cave in Carver County, Tenn., saw their bat numbers plummet by 98 percent.

New caves are receiving the disease every day, including Mammoth Cave in Kentucky in January. Panic is on the rise among those aware of the fate of the creature that saves 4 to 50 billion dollars in insect suppression services for U.S. agriculture every year.

Many officials are limited in their response to the disease. Because chemical sprays that can easily kill the fungus also irreparably damage the caves, all that agencies can do is limit human involvement through cave closures and disinfectant stations.

Some have attempted alternatives. One multi-partner project in Kentucky is working with a slow-release anti-fungal inoculation to cure the plague. And Holliday has his own project in Montgomery County, Tenn., an artificial concrete cave for the bats that will be sprayed for the fungus after the bats leave every year. If it proves successful in fighting the disease, the lessons learned could be applied to other manmade structures such as mines where bats hibernate.

While Holliday remains hopeful for the project, he does note that “it’s a last-ditch effort.” As with the rest of the cave dwellers, bats are long-lived and don’t reproduce often, recalling what Holliday says: “Once [the cave ecosystem] is gone, it tends to be gone.”

“Living where we do … the majority of caves are on private land,” says Marty Abercrombie, chairman of the Chattanooga Grotto caving association. “It’s really up to the landowner, how comfortable they are with letting people come onto their property.”

With that, Abercrombie suggests to contact a local caving organization (check caves.org) and a professional guide, or go to commercial outlets such as Raccoon Mountain in Chattanooga, Tenn. That way, safety is your friend until your skills call you further.

Sloan had some simple tips for people looking to go caving:

– Go in small groups for a better guiding and educational experience
– Wear clothing that can get dirty
– Go to the bathroom before you go in
– Don’t bring food in
– Go when it’s been raining; the extra moisture makes all the formations prettier
– Know what kind of trip you want, be it full of belly crawls or boy scouts

And says Cory Holliday, “Even without white-nose syndrome, we should always be cleaning our gear.” Studies show that biodiversity, especially with microbial organisms, decreases considerably with human activity, so be sure to wash your clothes for caving trips.

Holliday also says, “Minimize any exposure to bats in caves. Whatever they’re doing in caves, it’s a significant part of their life.”