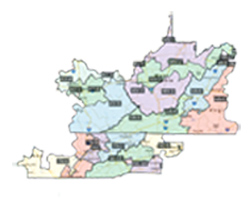 Marking the beginning of the most diverse Congress in the nation’s history, the 113th meeting of the U.S. House of Representatives began on January 3. Nationwide, the Democratic party gained nine seats in the House as a result of the November election, but it remains narrowly under Republican control. We looked at 16 central and southern Appalachian congressional districts to find out: who represents us?

Meet the current class of representives: