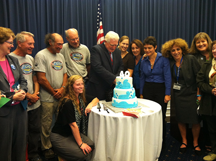 The report highlights examples from around the Southeast that show how Clean Water Act programs have helped communities restore water quality in local waterways. The report also analyzes the voting record of the southern congressional delegations on recent anti-clean water bills.

Highlights from the report include an oyster farm on the Chesapeake Bay, dairy farms in the Carolinas and a watershed polluted by coal mining in West Virginia.

When the Clean Water Act passed in 1972, all but one of 65 representatives from the southeastern states voted in support. But in the last two years, the region’s representatives have voted more often than not in favor of weakening clean water laws, as tallied in the report.

Through our Red, White and Water campaign, Appalachian Voices co-hosted a birthday party on Oct. 18 on Capitol Hill in conjunction with the Clean Water Network and others. Rep. Jim Moran of Virginia, a champion of protecting clean water laws, was on hand to cut the birthday cake.

Also present was Mike King, who was featured in the report; he spoke about how the Clean Water Act enabled him and his community to revive a waterway that runs behind his home in Montgomery, W. Va. Morris Creek went from being “orange and sometimes white, depending on what the coal company was doing, with a horrible smell of rotten eggs,” to a creek that now supports trout and other fish.

“We wanted to show that the Clean Water Act is helping real people so that decision-makers understand the consequences of weakening the Act,” says Diaz.