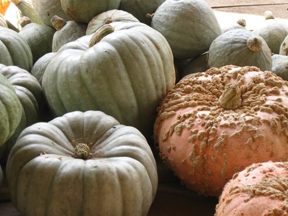 Appalachian farms are many things: bucolic, rugged, diverse and productive. But rarely does the word “large” apply.

Historically, farm size was not always an indicator of farm success. But today, small farmers aren’t just competing with their neighbors; they’re competing with large multinational conglomerates for space on consumers’ grocery lists.

Allison Perrett, a researcher with Appalachian Sustainable Agriculture Project, a nonprofit organization working in western North Carolina, studies the impact of the world marketplace on regional agriculture. “Globalization is both this big behemoth economic global system, but it’s also the countermovements that are emerging in response to it,” she says.

The ethos of globalization — eliminating barriers to international trade and rewarding regions for maximizing productivity — entered U.S. agricultural policy in the 1950s, Perrett says, when then-President Dwight Eisenhower’s secretary of agriculture, Ezra Taft Benson, told farmers to “Get big or get out.”

“We’re in the mountains and our farms are constrained by geography,” Perrett says. “And so our farms can’t get big, for the most part they can’t achieve the volume, the economies of scale that you need to have in order to compete in a global market.” According to the most recent U.S. Census Bureau farm data, from 2007, the average U.S. farm is about 420 acres, while the average western North Carolina farm is 75 acres.

Still, Appalachian farms were comparatively sheltered from the changes that led to the consolidation and closure of many medium- and small-scale midwestern farms during the ‘80s and ‘90s. Appalachia lost farms but retained more small growers than the rest of the nation largely because of a federal program that provided stable prices for one of the region’s signature cash crops — tobacco.

The program, a product of the New Deal that followed the Great Depression, controlled the tobacco market by guaranteeing a fixed price to growers who adhered to production quotas. But mounting public health concerns with tobacco use paved the way for the program’s demise in 2004, known as the tobacco buyout. In 1997 there were over 3,000 tobacco farms in western North Carolina alone — ten years later, there were about 250.

Members of the farming community witnessing the industry’s turmoil saw the tobacco buyout approaching. In response, Perrett says, “a group of farmers, concerned citizens, and agricultural support personnel came together and said, ‘What can we do to make sure that farming survives and stays in our communities and continues to be part of our culture?’” She sees the rise of the local food movement over the past decade as a combination of farmers’ need to transition in order to survive in the new market and consumers’ growing awareness of healthy, sustainable food.

One measure of the success of local foods is the Appalachian Sustainable Agriculture Project’s local food guide, which has been published in western North Carolina since 2002. In a decade, the number of farms grew from 36 to over 550, and farmers’ markets increased from 28 to 91, encouraging young entrepreneurs to start farming and providing seasoned farmers with new sources of revenue to replace those outlets lost to market shifts. 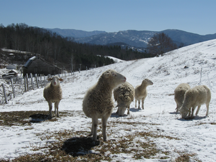 Sheep at Maple Creek Farm in Burnsville, NC, enjoy a sunny day after a snow. Since the 1950s, the region around Burnsville has lost about 70 percent of its farmland. Photo courtesy of ASAP, asapconnections.org

In Abingdon, Va., Kathyrn Terry heads Appalachian Sustainable Development, an organization that supports local food systems in the mountains of Virginia and Tennessee. She says the influence of multinational food systems can surface in unexpected places, such as when regional farmers are working to bring local food into local grocery stores. Many grocery chains require farmers to follow uniform international food safety procedures, which Terry says are well-intentioned but can be damaging to small producers.

“These food safety requirements are really not tailored for our farmers,” she says. According to Terry, it’s not uncommon for a food safety procedure to require tissue samples from each planting, which can cost $200 or more per crop, with some crops planted more than once in a growing season. For a small farm with many different crops and multiple plantings, that price tag can be high enough to keep a grower off the grocery shelves. On top of that, she says, different grocery stores often require various costly safety certifications.

Farmers without the proper certifications can be turned down from grocers, which Terry says is frustrating, especially when certified producers from countries with poor water sanitation are allowed to sell their goods. Appalachian Sustainable Development works to raise grocers’ awareness of local farmers’ needs, with some success. “Some of our buyers have been flexible to accept other certifications, which is stepping out on a limb for them,” she says.

In 2010, the U.S. imported over 11 times more tilapia than American farmers sold domestically. Fitzsimmons says most U.S. imports are frozen filets, which reach different markets than fresh, American-grown fish. “U.S. growers sell the vast majority of their fish as live product to Asian restaurants and grocery stores,” he says. Because tilapia require water temperatures above 60 degrees, it’s unlikely that U.S. farmers could raise tilapia for the frozen market as cost-effectively as equatorial producers. “Really all the [frozen] products coming in from China have not affected U.S. growers at all except to educate the public about what tilapia is.”

Directly or indirectly, that market education has an impact in Appalachia. Blue Ridge Aquaculture in Martinsville, Va., the biggest American producer of indoor-raised tilapia, transports live fish across the U.S. and Canada. The aquaculture facility at Johnson County High School in Mountain City, Tenn., produces the minimum amount of fish needed to keep the facility running for its main purpose — education. There’s a waiting list of local consumers who purchase the 10,000 pounds of tilapia the system currently yields annually (the hydroponic facility also yields bib lettuce, tomatoes and cucumbers).

The high school’s geothermal-powered, highly efficient aquaculture facility is arguably a model of self-sufficiency and the integration of a non-native food product into a local market. Kenneth McQueen, who helps manage the high school facility, says the biggest challenge facing domestic tilapia producers isn’t international competition but something that strikes closer to home — increasing local demand for fish by encouraging Americans to eat healthier.

Ironically, Appalachia’s exposure to international trade winds might be seeding a period of resilience among Appalachian farmers. “The local food campaign’s been around for a decade, but we really are at the very beginning of this transition,” Allison Perrett says. “It took a long time for the global food system to get to where it is, and those systems are very entrenched. And it’s going to take time to develop food systems that are grounded in our communities.”