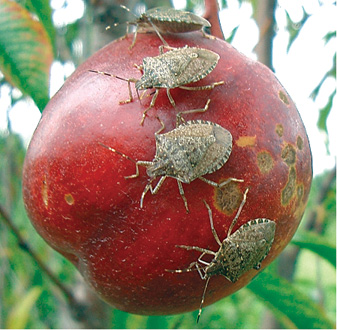 Brown marmorated stink bugs circle on unsuspecting apple. When feeding on these tree fruits, the insects cause catffacing, a deformity that makes the fruit unmarketable. Photo by Tracy Leskey, courtesy of the Appalachian Fruit Research Station

Anything that costs $120 billion every year to control can’t be good.

That’s just one estimate of the costs of invasive species in the United States, courtesy of the Rocky Mountain Research Station. In Appalachia, the everyday costs are more apparent: the smear of house sparrow droppings on your windshield, the garlic mustard that fills your yard, the anthracnose wilting your dogwood’s leaves.

And that’s not even the half of it.

Just Shoat Me
They estimated it would supply 500 to 700 pounds of sausage. The feral hog, dubbed “Monster Pig,” was shot nine times by an 11-year old boy in Alabama who wielded a .50-caliber revolver. The prodigious pig weighed 1,050 pounds and measured over nine feet long.

Picture that humongous ham and you might get an idea of the enormous problem that feral pigs — known as shoats when young — pose in the United States. From populating a few states such as Hawaii and California, they flourished to over five million nationwide, snorting their way through at least 35 states, where they cause over $1 billion in damages and control costs every year.

The Great Smoky Mountains National Park knows all about them. In 1912, a hunting preserve on Hooper’s Bald in North Carolina received a shipment of European wild boar, which flourished on the land. When the reserve went bankrupt in 1920, locals hunted off some, but many hogs escaped.

By the 1970s, wild hogs had taken over the park. In the intervening years, the wild boars coupled with domesticated pigs. Still lean and tusked like European wild boars, wild hogs today also show spots, short snouts and curly tails.

Some might call these hybrid pigs “cute,” but they effectively churn the earth, squashing seed growth, dredging up soil communities and vegetative cover, and devouring almsot anything, including the unique Jordon’s salamanders, which are found only in the park.

The hog is also a carrier for diseases such as pseudorabies, which the pork industry in North Carolina — among the biggest in the nation — spends millions of dollars fighting every year.

Bill Stiver, a wildlife biologist with the park, says they remove about 300 wild hogs a year via hunting and trapping.
According to him, that’s considered “maintenance level” for the population.

“With the existing manpower, we’re doing a pretty good job keeping them down to that low level,” he says. 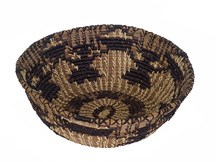 He says that the hogs are more reproductively-talented than even the white-tailed deer: they can breed at six-months old and have two litters per year, with three to eight piglets per litter. And if the swining-and-dining wasn’t enough, hunters are also suspected of moving the hogs illegally, which may account for new populations in the mountains of North Carolina and Tennessee.

Remember Monster Pig? Turns out its name was Fred, and he was a domesticated pig that a commercial hunting preserve bought and passed off as wild. Fred’s previous owners said the lovable loaf loved playing with children and eating cans of sweet potatoes.

Smells of Cilantro
Nobody invited it. The brown marmorated stink bug first showed up in Pennsylvania in the late 1990s, probably having hitchhiked on some crates from China or Japan. Since dropping in on Maryland in 2003 and West Virginia in 2004, it has spread to 39 states across the country.

This stinker is 1.7 centimeters long and shaped like a shield, characteristic of many stink bugs. Over its brown back are marmorated (or marbled) patches of off-white, black, blue and copper. When threatened, the bug releases a cilantro-like smell.

The brown marmorated stink bug, with its sucking proboscis, can eat over 100 recorded food sources, including tree fruits, berries, ornamental trees, and row crops such as corn and soybeans. “It’s not a fussy eater,” says Tracy Leskey, a research entomologist who works at the U.S. Department of Agriculture’s Appalachian Fruit Research Station in Kearneysville, W. Va.

2010 was by far the worst year for these stinkbugs in Appalachia, she says. In particular, the noisome nuisance devoured apples like they were going out of style. Many growers lost up to 80 percent of their apple crops and had to choose between selling a pittance or not even harvesting.

This year, Leskey says, her research team has made progress in identifying the pheromone of brown marmorated stink bugs. With this perfume in hand, they hope to bait a trap to capture and monitor the bug’s populations. Other ongoing efforts include researching possible native predators such as praying mantises and parasitoid wasps, as well as providing farmers with monitoring equipment so that they can be timely in their pest management.

For those who find a brown marmorated stink bug, Leskey suggests that if you’re in a state without an official population, submit the sample to your local land-grant university or state department of agriculture to have it confirmed. You can look on stopbmsb.org for more information. Second of all, don’t panic — it’s good to identify a population.

This busy bug, along with other invasives like spotted wing drosophila and kudzu bugs, are changing the dynamics of pest management by targeting crops that haven’t been attacked before. “We didn’t have to worry about this in the past,” says Leskey.

Vining For More
As if by pure muscle, kudzu strangles a landscape, blanketing trees, shrubs and grass with green as it reaches out to the sunlight. The vine, with three million hectares in the United States already under its belt, continues to swallow 50,000 hectares a year, mostly in the Southeast.

According to the U.S. Army Corps of Engineers, the Eastern U.S. should anticipate that the effects of climate change will bring higher temperatures and higher CO2 levels. Combined with increased natural habitat fragmentation, these changes all favor kudzu’s aggressive, foot-a-day growth and could signal a warning for cooler, higher-elevation locales like Appalachia.

It can take about $5,000 per hectare per year to control kudzu. And sure, a person can control it by digging up and eradicating its extensive root system and selectively spraying it with herbicides. But people like Nancy Basket in Walhalla, S.C., have a different idea.

“Since it’s growing in a ravine in the back of my house,” says Basket, “I use it out of self-defense.”
Dedicated kudzu crafters are able to make lamp shades, insulation, sculptures, paper from the leaves, barns out of dessicated bales, clothes, soap from the root (which also might, according to a Harvard study, be used to curb alcohol consumption).

“You can even eat kudzu,” Basket says.

Kudzu first shipped over from Asia in 1876. At first propagated to control soil erosion, with the federal government paying many farmers to plant it, it was eventually recognized as a pest weed by the U.S. Department of Agriculture in the 1950s.

From her shop, where she’s been for 16 of her 32 years in the kudzu craft, Basket chooses only vines that are thumb-width or thicker to make her baskets. By coiling and sewing the vines together, the traditional Cherokee style, she is able to create art and celebrate her Native American heritage simultaneously.

She teaches her art to all grades and ages, visiting schools, working at museums, and giving presentations to anyone who’ll listen. “If I blaze a trail through kudzu, maybe others will do it, too,” she says. “And then we won’t have to fight it. We can live with it. Get fed, live in it, use it for containers, a home. What else do you need?”

One can only hope that her teaching grows faster than the kudzu.

The more (invasives) you know:

Appalachia’s Gifts to the World:

Remember, if you’re hungry for some exotically tasty treats, go to www.appvoices.org/2012/12/17/invasive-species-recipes/ for some invasive species recipes!