The High Cost of Energy on Our Water 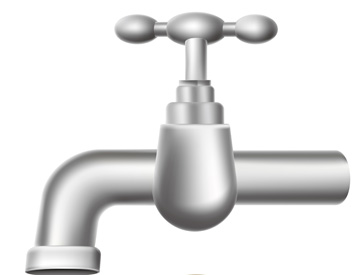 American industries are thirsty for fresh water, and our electrical generation has by far the biggest cup to fill.

Close to half of the water withdrawn from our rivers and lakes is destined to cool power plants fueled by coal, uranium and natural gas among others. A fair portion of the water siphoned into the plants is “consumed” or evaporates into thin air. The rest is ejected back into lakes and rivers as much as 17˚ F hotter, where it can be detrimental to the ecology of the waterway.

Not all alternative sources are exempt from this enormous thirst — biofuel, touted as a possible replacement for more polluting materials, uses almost as much water as coal. But other renewable energies, including passive solar, wind and even solar thermal, lack the insatiable thirst of their fossil fuel cousins.

As drought rages across half of the country this year, and many cities have imposed restrictions on lawn watering and car washing, the power industry continues to drain adjacent waterways. And ironically, coal plants cannot continue to withdraw water when hot water ejected from the plant pushes the temperature beyond a certain limit — meaning that power facilities are forced to shut down some or all of their output at a time when air conditioning and other needs create the greatest demand.

Water pays a steep price to meet our energy demand. Below we walk you through five of the highest costs energy exacts on our water system, using information provided by the Union of Concerned Scientists. 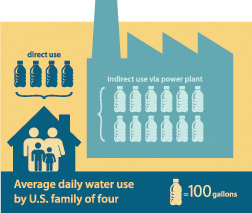 Keeping U.S. power on requires 43 billion gallons of freshwater per day — more water than 140 New York Cities would use. Nuclear power use 25 to 60 gallons per kilowatt hour (not including high volumes of water required for uranium mining and processing), and coal-fired power plants need 20 to 50 gallons of water per kilowatt hour (not including high volumes of water used in mining, processing and storing coal waste). That means that to power a typical U.S. home for a month, which according to the U.S. Energy Information Administration averages to 958 kilowatt hours, it takes at a minimum 19,160 gallons of water per month to keep your lights on. That’s a lot of lawn watering. 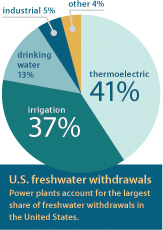 In the southeastern United States, power plants account for two-thirds of all withdrawals of freshwater, draining an average of 40 billion gallons of water from lakes and rivers every day for purposes such as cooling. In many cases, only a fraction of that water will be returned to the water source, while the plants lose or “consume” large amounts of the withdrawn water to evaporation — a typical 600-megawatt coal-fired power plant consumes more than 2 billion unrecoverable gallons of water each year from nearby lakes, rivers, aquifers or oceans. 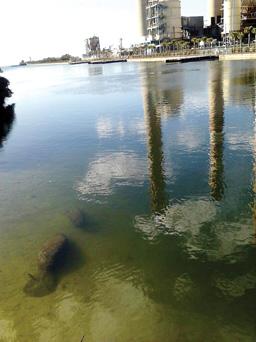 A large coal or nuclear power station with once-through cooling can easily draw in more than 500 million gallons of water from a river or lake every day. The consequences on both ends can be dire for wildlife ­— older systems can devour aquatic life, sucking in eggs and larvae, and trap adult fish and larger wildlife on suction pipe intake screens. The dozens of power stations that withdraw water from the Great Lakes for cooling kill an estimated 100 million fish and 1.28 billion fish larvae annually.

After being used to cool the generators, water that is discharged back into the river or lake is dirtier and hotter than when it entered the plant — by an average of 17˚ in the summer. Half of all coal plants report releasing water in the summer at peak temperatures of 100°F or more. This thermal pollution can stress or kill fish and other wildlife. In Lake Norman, N.C., massive dieoffs of striped bass in 2004, 2005 and 2010 were ultimately attributed to hot water discharge from the lake’s two power plants.

Since 2004, drought stress has led at least a dozen power plants to temporarily reduce their power output or shut down entirely, and prompted at least eight states to deny new plant proposals. During prolonged heat in the summer of 2010, water temperatures in the Tennessee River hit 90°F, forcing the Browns Ferry nuclear plant to significantly cut the power output of all three of its reactors for nearly five consecutive weeks — all while cities in the region were experiencing high power demand for air conditioning.

Not all reneweable energy sources are created alike. Certain renewable technologies, such as wind turbines and solar photovoltaic, generate electricity with essentially no water at all. Some sources, such as bioenergy, geothermal and concentrated solar panels (a.k.a. solar thermal), use more water, but still less than more intensive sources such as coal and nuclear. Energy-efficient measures to reduce the amount of electricity we use — through efficient appliances, weatherizing buildings, and dialing back heat and air conditioning — not only saves money and reduces emissions, but also eliminates the corresponding water use.