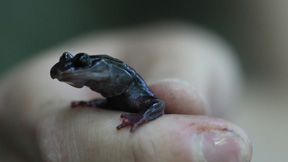 The South Mountain gray-cheeked salamander is a Globally Critically Imperiled species found in Box Creek Wilderness and is one of several local species which occur nowhere else in the world. Photo Courtesy of Foothills Conservancy of North Carolina

Public and private groups working together to protect land in Western North Carolina are making sure that the region’s aquatic ecosystems and the rare plants and animals found in them are also preserved.

A Morganton-based land trust, Foothills Conservancy identified the value of the area long ago. Serving as an ecological bridge between North Carolina’s Mountain and Piedmont regions, the area harbors a number of imperiled species, including the gray-cheeked salamander and Broad River stream crayfish, and serves as corridor for migratory birds.

Perennial streams lace the tract, including Box Creek, a primary tributary of the Second Broad River which supplies drinking water to residents of Rutherford County before joining the Broad River as it flows into South Carolina.

In a time when it is difficult to find public funds for land protection, Susie Hamrick-Jones, Foothills Conservancy’s executive director, praises the foresight of landowners like Tim Sweeney, the CEO of Epic Games in Cary, N.C., who owns the Box Creek Wilderness tract.

“Tim’s a great example for other landowners,” Jones said. “He saw opportunity in our area and understood the value of the lands that we’ve been looking at for so long.”

Jones said that most conservation occurs on private land and that government and non-profit funds cannot permanently protect all of North Carolina’s important natural areas.

In the mountainous counties to the north and west of the Box Creek Wilderness, a project proposed by the U.S. Fish and Wildlife Service seeks to protect some of the last remaining examples of Southern Appalachian bogs, isolated wetlands scattered across Western North Carolina that are biodiverse hotspots.

According to the FWS, mountain bogs provide food and shelter for game birds such as rails, ruffed grouse, turkey, and wood duck, and serve as breeding habitat for many species of amphibians, especially salamanders, of which the Southern Appalachians have the greatest diversity in the nation.

Where it is feasible, the FWS will allow wildlife observation, photography, education, and interpretation in bog areas currently closed to the public. The agency has already reached out to private landowners who have expressed interest in protection efforts.