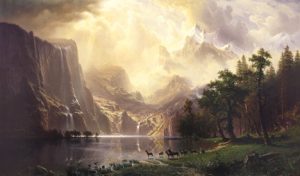 In truth, the American conservation movement has spanned the nation’s history — Lewis and Clark wrote of the land’s majesty in their letters to Thomas Jefferson. In the mid-nineteenth century American writers and artists, such as Albert Bierstadt, drew inspiration from the landscape, stimulating a popular movement of “nature appreciation” (above: Bierstadt’s Among the Sierra Nevada Mountains).

“Wilderness is not a luxury but a necessity of the human spirit.”
Edward Abbey, The “Thoreau of the American West” in Desert Solitaire

In 1963, when the first woman to receive the Audubon Award for achievements in conservation accepted the honor, she said that “Conservation is a cause that has no end. There is no point at which we say, ‘Our work is finished.’” She is widely considered the mother of modern-day environmentalism. But long before Rachel Carson wrote her groundbreaking book, Silent Spring, she saw herself as a daughter of the conservation movement.

Largely as a response to the growing pains of the Industrial Revolution, a national approach to land and resource conservation took root at the turn of the 20th century. The rapid industrialization of America led not only to the rise of the middle class, but also to a skyrocketing population thirsty for natural resources and a rise in air and water pollution.

Between 1905 and 1916, the creation of the National Parks Service, the U.S. Forest Service and the passage of the Antiquities Act, which gave the president the authority to designate land as national monuments, affirmed that America’s conservation movement would continue far into the future.

The era that solidified America’s conservation principles, however, was also a time of public trust in government, bipartisan cooperation and staunch regulation of business — a reality far from the America of today. The economic recession of 2008, growing national debt and globalized markets for America’s natural resources have created unprecedented challenges to land conservation and led some to argue for stripping wilderness designations from already protected tracts and opening public lands to timbering, mining and other forms of industrial development.

Still, the public’s commitment to conservation remains strong. In 2009, during the depths of the recession, more than 80 percent of the public supported using revenue from offshore drilling permits to fund the federal Land and Water Conservation Fund — the primary source of money allocated to create and maintain public lands. Last year, the majority of North Carolina voters said they would rather pay a higher sales tax than cut funding to parks and public spaces.

To groups ranging from community land trusts to national advocacy organizations, conservation remains a cause with no end. 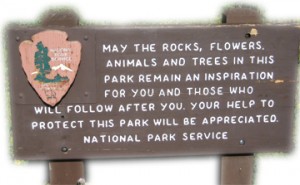 Photo courtesy of the Leave No Trace Center (www.LNT.org)

By the mid-1800s, the seeds of the conservation movement had been planted. The leading transcendentalist, Henry David Thoreau, proclaimed in 1851 that “in Wildness is the preservation of the World.” Painters of the Hudson Valley School, such as Thomas Cole and Albert Bierstadt, were creating works inspired by the grandeur of the American landscape. And somewhere in mid-century Manhattan, an inauspicious boy was developing the interests that would lead him to become the most celebrated conservationist in the nation’s history.

In 1901, Theodore Roosevelt became the 26th President of the United States, and the first American leader to make conservation a cornerstone of his domestic policy. To Roosevelt, conservation was not an option but an ethical imperative. During his presidency, he created 53 wildlife refuges, signed legislation establishing five national parks and appointed the National Conservation Commission to inventory America’s natural resources. By the end of 1906, the year Roosevelt signed the Antiquities Act into law, he had created four national monuments.

Groups advocating for the protection of public land and the responsible management of natural resources continue to praise Roosevelt and the early conservationists for their foresight. “They set aside these places because they knew it was good for the country,” says Jim DiPeso of ConservAmerica. “Roosevelt said that conservation is a great moral issue. It’s for everyone and it’s part of the legacy that we should hand off to future generations.”

ConservAmerica was founded in 1995 after a Republican-led Congress set its sights on undermining bipartisan environmental laws, especially the Clean Air Act and the Clean Water Act. The mission of the non-profit organization is to resurrect the Republican Party’s tradition of conservation exemplified by Roosevelt.

“Things were getting a bit crazy in those days,” DiPeso says of the political climate that encouraged the creation of ConservAmerica, then known as Republicans for Environmental Protection. “Our founders felt this was not the reason why people had voted for Republicans in the first place. They were going after laws that had broad public support and had accomplished a lot in protecting the quality of the environment.”

Despite unflagging public support for conservation, groups like ConservAmerica are finding themselves on the defensive.

One piece of legislation in particular has mobilized conservation groups to emphasize the importance of conservation to the nation’s past, present and future. The Wilderness and Roadless Area Release Act (H.R. 1581), introduced in 2011 by California Congressman Kevin McCarthy, would open approximately 60 million acres of roadless areas in national forests and wilderness study areas to industrial development.

While western states would be the most heavily impacted — nearly 9 million acres of protected wilderness would be up for sale in Alaska — Appalachian states would stand to lose protections on more than 800,000 acres of national forests, including large swaths of Virginia’s George Washington National Forest. The Wilderness Society, seeing H.R. 1581 as being unfaithful to America’s tradition of conservation and public land protection, has taken to calling it the “Great Outdoors Giveaway.”

When it passed in 2001, the Roadless Rule that now protects the 60 million acres at risk came under immediate attack in Congress. The Forest Service received more than 2.5 million citizen comments on the rule, almost all in favor of complete roadless protection.

In 2005, after the Bush administration repealed the Roadless Rule, the Pew Environment Group’s Heritage Forests Campaign garnered support from a bipartisan collection of governors who endorsed the full protection of roadless areas in their states. By September 2006, a federal district court had reinstated the rule.

The Wilderness Society is familiar with the pendulum swings of support for conservation in government. Before it was signed by President Lyndon Johnson in 1964, the Wilderness Act went through 66 drafts. In one of his many appearances before Congress, the legislation’s author and longtime executive director of The Wilderness Society, Howard Zahniser, said, “Civilization’s ambition can encompass wilderness protection. And so sublimated, it can make preservation a prevailing purpose. We maintain the gallery of art, even though few use it.” Zahniser died a few weeks later, just months before his landmark legislation became law.

Moral appeals for conservation in the tradition of Thoreau, Roosevelt and Zahniser have sustained the American conservation movement thus far. To ensure its continuation, however, today’s supporters are beginning to realize that economic arguments must match the power of moral ones.

Saving for the Future

In a 2010 memo to his cabinet members simply titled “America’s Great Outdoors,” President Barack Obama announced a new initiative to “develop a conservation agenda worthy of the 21st Century.”

“Despite our conservation efforts,” the president wrote, “too many of our fields are becoming fragmented, too many of our rivers and streams are becoming polluted, and we are losing our connection to the parks, wild places, and open spaces we grew up with and cherish.”

Central to President Obama’s America’s Great Outdoors initiative is the promotion of existing programs connecting Americans with their nation’s parks, with the federal Land and Water Conservation Fund at the front of the line.

Created in 1965, the LWCF provides funds to land and water protection projects to benefit all Americans, including everything from national parks to local playgrounds. The Trust for Public Land, a nonprofit conservation group, found that for every dollar invested in projects with funds from the LWCF, communities received a four dollar return. Rather than being funded by taxpayer dollars, the $900 million appropriated to the LWCF comes from oil and gas drilling fees, though Congress typically diverts the majority of these funds elsewhere — shortchanging the LWCF by some $17 billion since its creation.

Last year alone, $33 million in grants were awarded to 198 parks, protecting 33,432 acres and contributing to the outdoor recreation industry that generated $730 billion and supported 6.5 million jobs. Some in Congress, however, still target the LWCF claiming it does not support job growth, a trend that continues to baffle DiPeso.

If anything, conservationists believe the economic benefits of land protection are underestimated since they will last far into the future. Spitler, for one, believes that there is a moral argument for the creation and maintenance of public lands that still holds weight: future generations.

“They’ll thank us for them,” he says. “When future generations look back on how we’ve behaved in these current times I don’t think they’ll say ‘Gee, you saved too much for us.’ If they criticize us they will say, ‘You saved too little.’”