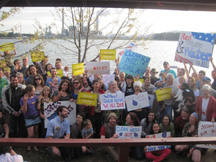 Over the past months, Appalachian Voices and our Red, White and Water campaign have continued the fight against toxic coal ash in North Carolina.

In Charlotte, Appalachian Voices teamed up with the local Greenpeace chapter to host a coal ash tour, led by award-winning reporter Rhiannon Fionn, who has covered issues related to Duke Energy’s Riverbend coal plant. Over 50 people attended the event.

More than 200 residents from Asheville and surrounding areas came out to support that message at our “Clean Water Not Coal Ash” rally on March 22 at Lake Julian Park in Arden, N.C. Held in conjunction with the nineteenth annual World Water Day, the event was co-sponsored by Appalachian Voices, the Western North Carolina Alliance and other organizations to call attention to the threat posed by coal ash to drinking water and the nation’s rivers.

Attendees listened to educational speakers including French Broad Riverkeeper Hartwell Carson, Richard Fireman of N.C. Interfaith Power and Light, Terry Clark of Physicians for Social Responsibility and affected community members like Donna Keiser discuss the negative effects of the coal cycle in their communities and what it is like to live near coal ash ponds.

In January, North Carolina’s Department of Environment and Natural Resources confirmed that coal ash ponds in North Carolina are leaching toxic heavy metals into groundwater. Despite the mounting evidence of the dangers, coal ash is treated as no more toxic than regular household garbage and the U.S. Environmental Protection Agency has delayed enacting any guidance on the substance.

To combat the EPA’s delays, Earthjustice, on behalf of Appalachian Voices and other groups, is proceeding with a lawsuit against the agency to force the release of long-awaited public health safeguards against toxic coal ash. According to the Resource Conservation and Recovery Act, which is meant to protect human health and the environment from the potential hazards of waste disposal, the EPA is required to review and revise RCRA regulations at least every three years.

To learn more and to sign a petition asking for protection from the dangers of coal ash in North Carolina, visit: appvoices.org/nc-cant-wait.

The Appalachian Water Watch citizen monitoring program is gearing up for more stream monitoring, citizen trainings and an expanding program. Our first training of the year will be hosted by Kentuckians for the Commonwealth on May 12 as part of a larger KFTC meeting on ways to protect Kentucky’s water.

We are working with other organizations in The Alliance for Appalachia on a joint clean water protection effort by increasing participation, expanding to new locations, improving the public database and increasing equipment availability.

Kara Dodson, a familiar face for many of our volunteers, will return this summer to run trainings and provide on-the-ground support in Kentucky and Virginia. Pallavi Podaparti, a long-time KFTC member, will also be joining the Appalachian Water Watch team for the season to help with our growing demand for trainings and volunteer support.

If you know a group that would be interested in taking part in the citizen water monitoring program, please contact aww-admin@appalachianwaterwatch.org. 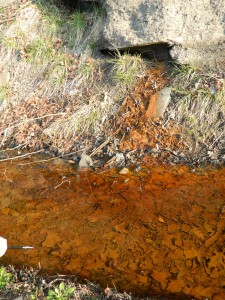 Appalachian Water Watch met with members of Kentuckians for the Commonwealth throughout Harlan, Letcher, and Floyd counties in March, giving our team an opportunity to see the good and the bad in Kentucky streams.

In Harlan County, the communi ties of Benham and Lynch are working hard to protect their streams and city water from harm caused by proposed surface mines. By monitoring water quality before the mines begin work, the existing high water quality is documented.

The proposed mines are owned by Nally & Hamilton and A&G Coal Corp. Both companies have dubious environmental and safety records, and Nally & Hamilton is the defendant in one of Appalachian Voices’ ongoing Clean Water Act cases.

In Floyd County, we were alerted to acid mine drainage outside Prestonsburg. Samples taken from the site indicate an iron level of 183 milligrams per liter – more than 45 times the amount Kentucky allows active mines to discharge. KFTC staff met with the Kentucky Department of Natural Resources and will continue to monitor the site.