Business As Usual At Massey 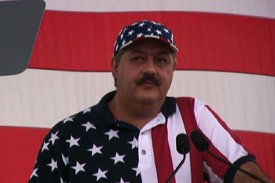 The incident, which was our nation’s deadliest mining accident in 40 years, was unquestionably made more tragic by the fact that it was preventable. In the wake of the accident, an ocean of company transgressions has come (and continues to come) to light.

The Mine Safety and Health Administration (MSHA) issued the UBB mine over 500 citations in 2009 alone (amounting to $897,325 in proposed penalties) and over 50 citations in March of 2010 alone.

According to MSHA, “Massey failed to address these violations over and over again.” Before the explosion, Stanley Stewart, an UBB miner who survived April 5, told his wife that UBB was a “ticking time bomb.”

Following the tragedy, Massey CEO Don Blankenship said, “it’s too late to bring back those that we lost, but we must do everything that we can to find out what happened and do our best to keep it from happening again.” Let’s take a closer look at Blankenship’s company, Massey Energy.

The NYTimes reports that in the past 10 years, there have been 52 deaths at Massey mines. In 2006, a fire at Massey’s Aracoma Alma mine killed two miners, and the company eventually paid $4.2 million in criminal fines and civil penalties. In 2009, Massey was charged with $12.9 million in proposed fines for safety violations.

The company appealed 75% of the violations, and awarded its CEO, Don Blankenship, a stunning $2 million safety bonus the same year. In 2008 the EPA fined Massey $20 million for 4,500 violations of the Clean Water Act.

This was the largest fine in the history of the law. Then, in 2010 four environmental groups filed a lawsuit against the company citing evidence that, unbelievably, Massey’s Clean Water Act violations had, increased in frequency since its record 2008 fine.

On May 18, officials at Massey held their annual shareholder’s meeting at the Jefferson Hotel in Richmond, Va, as the United Mine Workers of America and citizen activists protested outside, calling for the company to hold Blankenship and members of the company’s Board of Directors accountable for UBB.

Prior to the meeting, nine large investor groups, heavily invested in Massey Energy, also called for the resignation of Massey directors.

Despite them all, Massey reelected its board.

On May 20th’s Senate hearing on mine safety, Blankenship was unapologetic about his company’s responsibility for UBB. According to Blankenship, the 23 fatalities at Massey mines in the 10 years prior to Upper Big Branch were “about average.”

“Massey does not place profits over safety,” Blankenship said. “We never have and we never will. Period. From the day I became a member of Massey’s leadership team 20 years ago, I have made safety the number one priority.”

West Virginia Senator Robert Byrd was unconvinced. “I cannot fathom how an American business could practice such disgraceful health and safety policies while simultaneously boasting about its commitment to the safety of its workers,” the senator stated.

“This is a clear record of blatant disregard for the welfare and safety of Massey miners. Shame.”